Arequipa, Peru: As we made our way through sundry meetings in Arequipa, we kept hearing that in addition to the unions the other key ingredient that was vital to any successful equation in creating change in the city was AUPA.   What we heard was tantalizing.  Somehow AUPA was an organization stitched together across the pueblos jovenos as they were called in Peru – the shantytowns or favelas or whatever one might call lower income neighborhoods.  This sounded good.  This sounded more like ACORN than anything we had found here or elsewhere.  This meeting was a must.

The calendar was quickly not becoming our friend, because we were running out of hours in the day.  We had a meeting scheduled, then we didn’t, then we did, then we couldn’t confirm, but finally we got a call that said the president of AUPA could meet with us, if we came right now, so at 5:30 in the gathering darkness, we jumped into the mini-cabs and headed for the AUPA headquarters, a building not far from the center of Arequipa.

The headquarters was a sturdy two-story affair with signs on the 2nd floor about computer classes.  It turned out that AUPA owned the building and rented out space to several tenants in order to hold on to the property.

We met the newly elected president only ten months into his two-year term, Leondro Castaneda Pena, a man in his late 30’s or early 40’s, worked as a guitar maker during the day and ran a mass movement every other hour it seemed.

AUPA, as he described it, was an a voluntary organization composed of affiliated neighborhood groups in 500 pueblos jovenos throughout Arequipa, which composed about 70% of the population of the city.  There was no paid staff.  Decisions were made at weekly delegate meetings every Wednesday night at 8:00 PM which were attended by between 100 and 300 delegates per week.  At these meetings the direction and actions of the organization were hashed out, representations and presentations from other organizations are made, and the program was communicated out to the troops.  They used to have dues at a minimal level, but during the economic crises had been forced to suspend the dues program, so they were now working on the thinnest margin.

Drummond Pike of the Tides Foundation asked Leo if they ran social services through the organization.  The answer was classic and on target.  He said that they stuck to what they knew how to do – push and protest for change from government and other entities and institutions.  This was ACORN old school all the way.  I asked Leo where AUPA got its power, and in an equally telling fashion, he answered that their ability to put up to 60000 of their members on the street and to act independently was critical.

AUPA was also non-partisan and this is indeed a rarity in the politicized nature of Peruvian politics.  In fact Leo shared with us that the efforts, particularly by some of his newly elected board to get the organization to ally with APRI, long the largest party in Peru, had led to bitter conflict and the forced resignation of several of the board who had tried to pursue this policy.  AUPA had been building this grassroots organization for almost 45 years it seemed and had been able to survive intact even through the Fujimori years.

He confirmed that he also knew of no other organization in Peru like AUPA, which had also been our experience in Lima, where we had found organizations in some of the pueblos jovenos but nothing that pulled everything together.  Leo said there was currently an effort to build something similar in Cusco, and he was going down there to a meeting soon to help them along, but that it had also been tried before and failed, so one could only hope that this effort would find success.

We understood now more fully why the privatization of electricity could have been blocked with AUPA members piling into the plaza day after day in such numbers and why in fact the privatization of water could also be difficult with this alliance in place.  FENTAP’s affiliate in Arequipa has some 300 members out of more than 600 permanent employees who work for the water system.  Alone they would not have stood a chance, really.  FOTA made a difference but its capacity was also limited, no matter it’s enthusiasm in backing one of its federation in a fight for survival.  AUPA was the missing heart of the equation in Arequipa.  Like ACORN, a rare flower growing in this desert that needs to spread everywhere.

There had been a crowd of people leaving Leo’s office when we first came in and now there was a larger and growing crowd of 50 or more, sitting and standing about in the waiting area and front of the building.  It was pushing 7 PM now, and there was a delegate assembly that night in an hour, so we had to settle with the happiness of having found AUPA.  Leo had more important business to do and many people to see and much to hear and do before the weekly assembly.  AUPA had to keep moving and get the job done.  I took a look in their large, downstairs meeting hall with its rough benches and quickly counted the capacity.   AUPA was something very real and very special.  We wished Leo luck and went back into night. 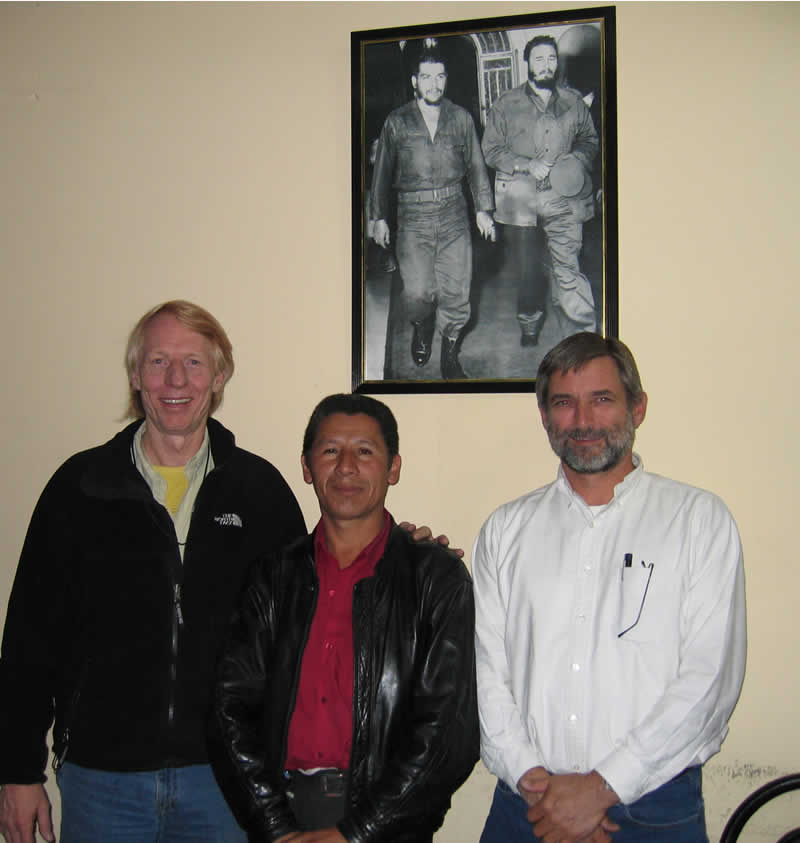 Wade Rathke, Leo Castenda Pena, the president of AUPA, and Drummond Pike, President, Tides Foundation in San Francisco, in the AUPA offices beneath of picture of some of their heroes. 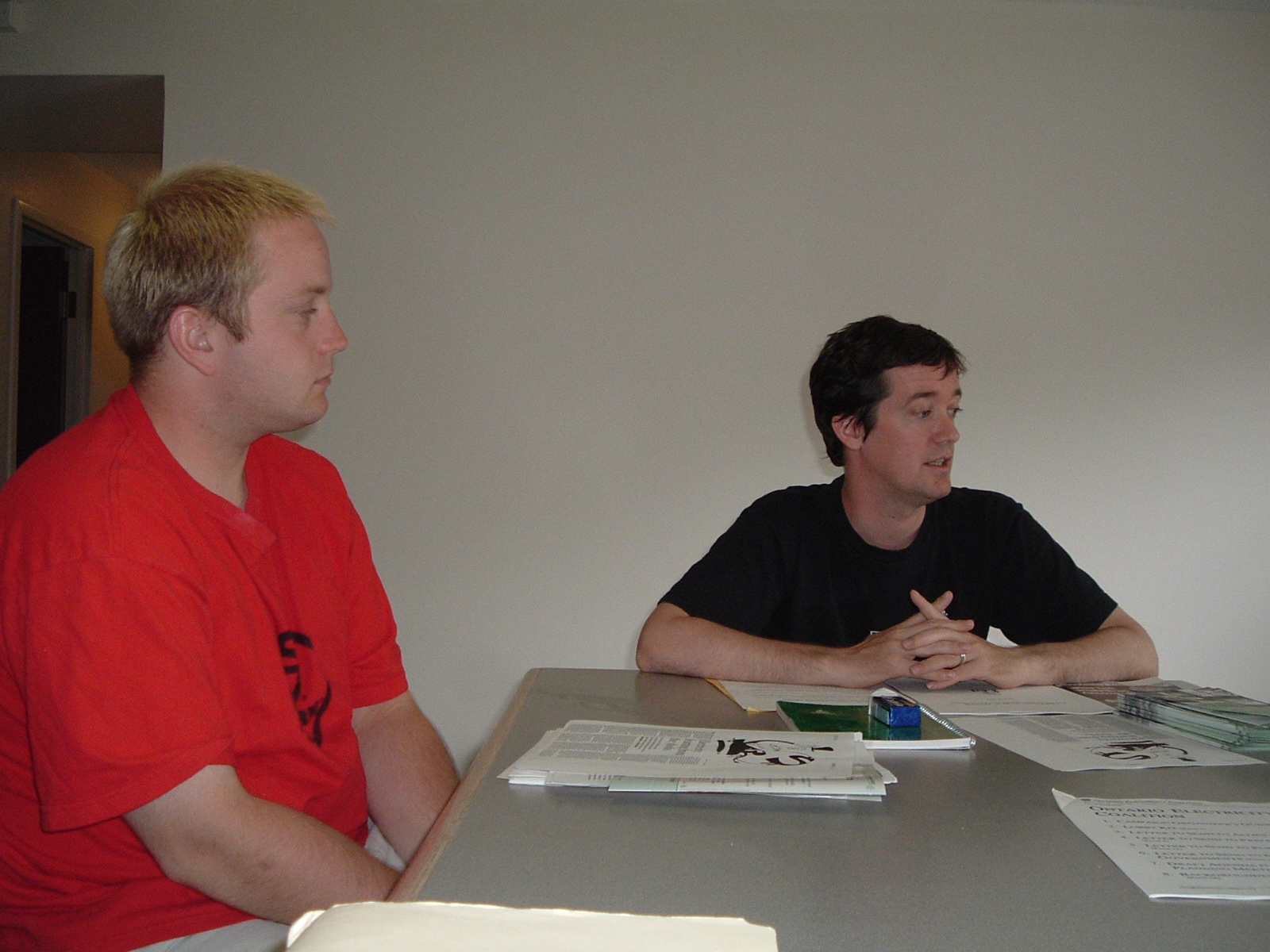