Houston     Another highlight of our Year End / Year Begin meeting was bringing together some of the top organizers dealing with Wal-Mart to look at the results of the work and the plans for 2006.  Paul Blank, the director of WakeUpWalmart.com, Amy Tevares, Field Director of WalMartWatch, and our own Rick Smith of WARN and Helene O’Brien, ACORN’s Field Director were on a great panel that prompted scores of questions from the organizers in the crowd.
Amy detailed the results of Wal-Mart Week and the role the Robert Greenwald film along with lots of grassroots activism had inspired communities around the country to take another look at Wal-Mart.  Paul with statistic after statistic argued the case that no matter what the company asserted, the numbers of site fights were increasing, the impact on the company was significant, and the campaigns were getting traction.  Helene and Rick detailed the work in the field both in Florida where WARN and the Wal-Mart Workers Association have debuted to great impact, as well as in markets around the country where ACORN has been involved in the campaign.
The questions from the organizers were interesting because it indicated the depth of work that needs to be done to bridge the campaign to others.  Some wanted to boycott the company.  Others wanted to see if Wal-Mart would open in underserved areas.  Some wanted to use the WARN predictive mapping software to deepen the fight.  Others wanted to make sure that people elsewhere knew about the extent of Wal-Mart’s expansion plans in their areas.
We showed the Luisa Dantas clip with her footage and film by Dine’ Butler of putting together the campaign in India to stop the amendment of Foreign Direct Investment (FDI) from allowing Wal-Mart and its buddies from swamping the market.
There’s a lot of excitement.  We could hear it from the panel and in the audience.  We just need to figure out how to pull all of this together. 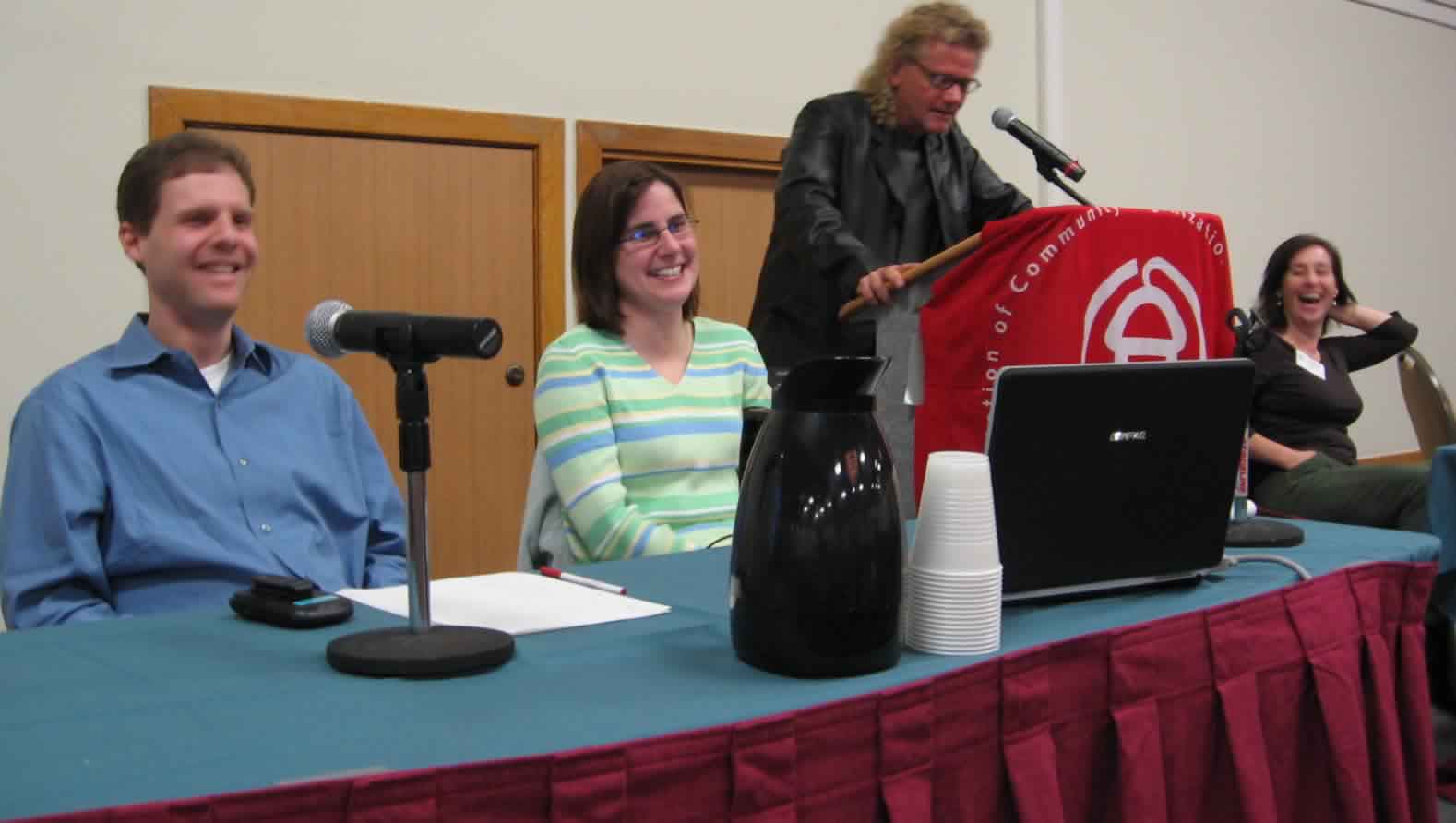 Houston          The annual Year End / Year Begin meeting of all of the ACORN family of organizations was dislocated, but the tribes had all gathered — the purple shirts of Local 880, the welcomed addition of the New York Working Families Party, all of the A-CLOC and Wal-Mart related organizers, and obviously everyone drawing a paycheck on the ACORN staff.  We were at the Del Lago resort — the only pace available — when we were bounced out of New Orleans, but could find no bookings in Baton Rouge or Houston that could hold us.  Del Lago is on Lake Conroe about 45 miles into the country from Houston Intercontinental Airport.  This was a captive audience meeting!
Mayor Bill White of Houston and Councilman-at-large Oliver Thomas, the President of the New Orleans City Council joined Dorthy Stukes of the ACORN Katrina Survivors Association and Beth Butler of Louisiana ACORN on a panel to talk about the lessons of Katrina.  Each one said remarkable things that marked the hurricane for them, as for so many others, as a defining moment.
Bill White and Oliver Thomas of course both talked about the value of their partnerships with ACORN, but more than that the lessons they felt were coming to them.
Mayor White felt he had learned that you could not count on the federal government.  Given the poverty of the cities, that’s sobering!  He said his advisors always told him to start with a joke, and now he did, he would just face an audience and say, “FEMA” and listen to the laughter as he began his remarks.  It was the best — and shortest — joke he knew.  He also shared stories that defined a generation — registering voters in lower income, minority neighborhoods in the 1964 as the Voting Rights Act was passed — and why the same kind of commitment and compassion was important to flow from the floods of Katrina to this generation.  White didn’t mince words.  He was not a flowery speaker, but plain spoken.  A best of the breed “can do” guy who didn’t stint on his praise for the partnership he had developed with ACORN.  A key lesson he had found was the importance of the “grassroots” and the people and organizations who were there when something like this happened that required real and total participation from the grassroots up.
Oliver Thomas shared personal lessons that were moving and powerful from the streets of New Orleans.  He shared the crises of patriotism that was challenging his family values from generations of living in New Orleans.  He shared the culture of denial about hurricanes.  Councilman Thomas met extensively with various people on the ACORN Katrina Task Force at the staff level about housing, policy questions, and moving forward.  Clearly, we needed to make sure the people had a voice, and Oliver was committed to holding the microphone.  That was a lesson!
Dorthy Stukes said one of the things she had learned was to evacuate ‘even in a hard rain!”  People knew what she meant.
Beth Butler talked about a lot of things from the head and the heart, but as she told the story of her “double taking” when she saw a woman out waiting for a bus for the first time in 3 months and how happy it made her, we knew that there were a million lessons, and we all still had a lot of learning to go.
December 18, 2005 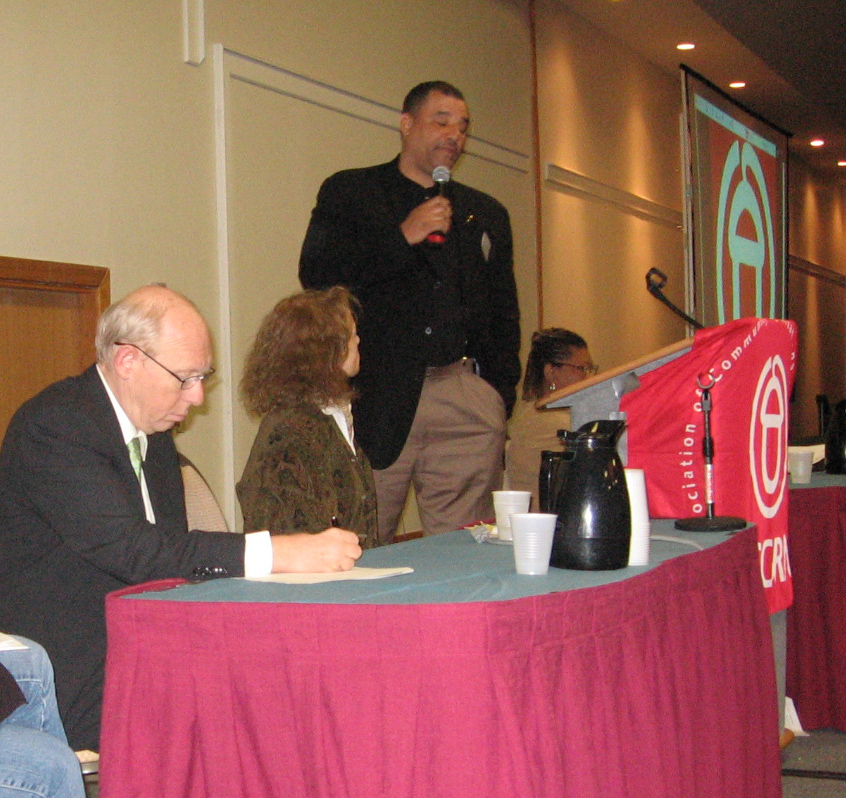 New Orleans Councilman Oliver Thomas speaking on the lessons of Katrina at ACORN’s annual YEYB conference with, from right to left, Dorothy Stukes of the ACORN Katrina Survivors Association, Beth Butler of Lousiana ACORN, and Mayor Bill White of Houston.