St. Petersburg – We are over the top in New Orleans now.  We are at the point where the level of grief, frustration, and helplessness boils over everywhere.  Headlines in Tampa and St. Petersburg simply said “Chaos” and “Anarchy.”  This is now a case of total government failure, and a national disgrace.  This is a collapse of the national will even while demonstrating the strength of the human spirit.

Helene O’Brien, ACORN’s National Field Director, called me in the afternoon weeping about the TV film of people dying in the Convention Center and yelling that we had to do something, because our people were dying. What could we do?  What works?

So, we put out a call on the email alerts and to all of our members to all their Congressperson and demand that the poor of New Orleans and the victims of this disaster get immediate help.  Some of our offices are calling for sit-ins in the offices of their representatives until they know there is help.

Is this a decision or a cop-out?  It’s a nothing, but it simply a way to allow everyone to do something in a situation where there is almost nothing we can do at the depth of our powerlessness.

My daughter, now a real organizer, talked to me at mid-night from the Tampa office where she and other young organizers had been making calls and running off flyers because they wanted to do something, so they were doing what they knew how to do.  It was hard to tell her that there was no way to move 100 people at the Site Fighters Conference to a Congressional office.  There were no busses.   There was no gas.  Maybe at the end of the conference we could have everyone made a cell phone call to the 800 number for Congress at the same time, so that they could do something.

There was silence.
She said it was lame.
It is lame.

I’m ashamed that we have worked so hard for so many years to organize so many thousands of lower income families and built so much power in so many areas and absolutely in New Orleans, but it turns out simply to not mean much when the price of being poor is reduced to dollars and cents in a disaster and converted to life and death.

She thought the government was killing people.  She felt that she was watching genocide in her hometown, because people were largely black and all completely poor.

I thought it was not genocide, but a breakdown, an implosion, a level of incompetence at an extreme level.

But, thinking now this becomes simply a distinction without a difference.  Either way it is inarguable that if this was not happening in the poorest city in America, we would not have so quickly recreated the conditions of global south in our own deep south.  Either way one is shocked to see so clearly and to know so fully that if this were not happening to people so poor and largely African American, this would not be happening.

At the bottom line as an organizer one learns that sometimes it is not a question of doing the right thing or the wrong thing, but at least of doing something, allowing people to act in some way, to have a voice and to speak strongly with that voice.

Even as it turns out, that no one is willing to listen.
Or act.
Please help us and do something.
Now.

St. Petersburg   Scores of people continue to reach out from all corners to offer to help.  I’ve lost count and can not seem to keep the list.

An old friend of Jeff Karlson, the head of ACORN’s Tax Centers, contacted me to try to see if I could confirm that he was safe.  I knew he had evacuated to Gainesville, so one person found some relief.  We found Juanita Waller, the Local 100 Office manager, when her aunt reached me by email to let me know Juanita and her family had made it to Tunica, Mississippi, out of Memphis, and were waiting to be evacuated.

ACORN offices throughout the South reached out looking to help their fellow members in New Orleans.  Houston ACORN and its great head organizer, Ginny Goldman, and the incomparable, Orell Fitzsimmons, Local 100’s director in Houston, were inspired in their response.  When busses began pulling people out of the Superdome to transport people to stay at the Astrodome until the end of the year, they began hearing from ACORN and union members in Houston who wanted to bring their fellow members into their homes for the duration.   Not able to get New Orleans ACORN staff or leaders to Houston yet to help, left Ginny and Orell at the Astrodome with ACORN and 100 flags trying to find people as they arrived and sorted themselves out in the Astrodome.

In a moving “so New Orleans” story I head they were having to wean the temperatures down in the Astrodome from the high 70’s to its eventual capability, because after the ordeal they knew the evacuees couldn’t handle the low temps of working air conditioning anymore.  Who felt that day would ever come?

Some people reached out ready to work and move into the gap:  Sharon Kerry, my assistant found me from New Roads, LA, where her family, including Mildred Edmond, Local 100’s Treasurer had fled, ready to report to our Baton Rouge office and help out;  Carol Myers from CCI, found me when she couldn’t find her supervisor to say that she was in Folsom, LA, where a tree had come through her brother’s house, but she was ready to go to work to help;  Pat McCoy reached out from DC and was ready to come into the mess.

Kirk Adams, SEIU’s Chief of Staff, made it through the cell finally to talk about setting up a SEIU New Orleans Emergency Fund by the end of the week.  ACORN began one to moving response at www.acorn.org .

Kevin Whelan, ACORN’s communications director, Steve Kest, national director, and Mike Shea, housing director, started making plans and making calls to raise the money to relocate the national headquarters temporarily to our hall in Baton Rouge and get the hardware in along with Barbara Faherty, CCI’s director, so that payroll would be able to go out for our 1200 staff and bills could be paid.  Orell was able to find places for some people to stay at the Blue Moon in Lafayette (picture in one of the first blogs!), a youth hostel with an attitude, that Local100 staff passing through have always called home.

Jet Blue sent me a nice e-mail telling me my plane reservation from Rochester, New York to New Orleans on Labor Day was cancelled, because the New Orleans airport was expected to be closed until the end of September.  I could go somewhere else with them, but for the life of me I couldn’t think of where to go.

Lost contact with my brother and folks yesterday, though a cousin in Pittsburgh reached me by email to tell me that he heard my folks were now in route to Kansas City to stay with my Uncle Tom and Aunt Charlotte for several weeks there or until they were able to return home.  This is a problem for a million people from New Orleans.  If you can not go home for an indeterminate amount of time, then where do you go?  How do you make it?  Where do you re-fill your prescriptions?  How long can you make it on two pairs of pants?  The weight of the minutia of life seems immense.  An article in a newspaper yesterday quoted a man worried about having evacuated, despite the fact that it was the right thing to do, because his credit card only had a $2000 limit — how long could they make it, he wondered?

Felt better finding Dine’ in Tampa so at least some of my family was close at hand.  She sent a message to her posse finally to tell them she was ok.  She mentioned spending time at work as an organizer here in Tampa, and continually going back to the websites and looking at pictures of home.  Beth and Chaco emailed having reached Rochester late yesterday.   We were all able to compare notes of similar experiences trying to look at newspaper pictures and piece out our house and the office and other landmarks, trying maddeningly to see if we could tell if there was water there and how much.  It’s a fool’s pursuit.  Beth wanted to make sure that I had taken steps to reroute all of the mail from New Orleans to Baton Rouge.  I had done nothing of the kind.

I felt badly because friends reported reading my blog yesterday and weeping.  It’s the human condition and it proves again the deep character of organizers and our people lies in our ability to empathize.  Knowing that I can’t cry, they have done it for me, and I really am unable to express my thanks to all of them — and you — for that.

But, we simply have to hear some good news soon! 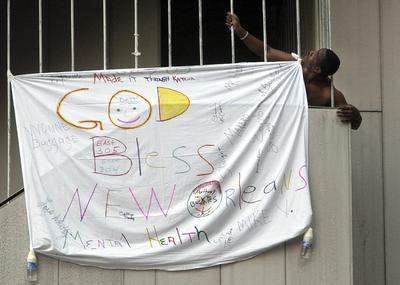 A man at Charity hospital still has hope
Refugees turned away at the Superdome head towards the Crescent City Connection and the West Bank
A man wades through the water on Tulane and S. Claiborne