Santiago    Remittances are the lifeblood of many of the ACORN International communities from Canada to Mexico to India to Kenya, and it was not long into the conversation among all of our organizers before the a campaign and the actions that would bring it to life started to take shape. After years of poking around on this issue around the borders, with various products, and across communities, the members’ patience was exhausted. It is past time for serious work and action here.
Luckily, I had also had a recent — and important — conversation with Francis Calpotura who directs TIGRA, an impressive effort with an increasingly far reach around this issue. We had discussed increasing the involvement of ACORN International as a partner in the campaign and possibly even acting as lead countries in various locations. This alliance could be important in moving forward.
It wasn’t long before HSBC and Citi were both emerging as primary targets with their deep presence in Mexico, Canada and virtually every one of our countries. They are institutions where we have a high degree of familiarity and their inability to even level out the costs within their subsidiaries is grating.
A lot of work and research now needs to be done, but an aggressive timetable to kickoff in mid-June was set and suddenly the meeting was taking an important and wonderful turn for the future of the federated organizations acting as ACORN International. 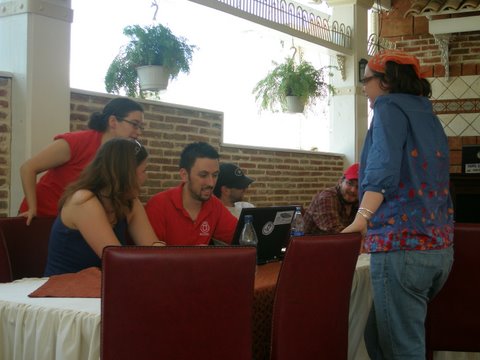 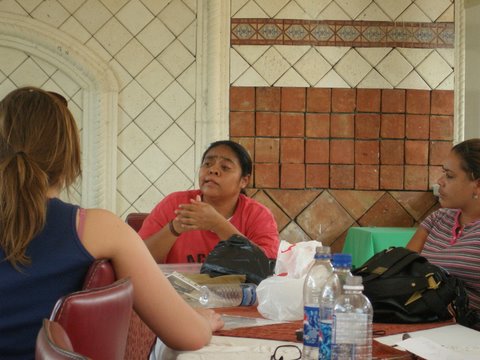 Santiago    Meetings with the staff are important god knows, and we had lots of those on tap, but when the bell rang to jump in the van to go tour the neighborhoods with the members and get a feel on the ground for the work of ACORN Dominican Republic in Santiago, we were are raring and ready to go.
Katia Soriano, the DR Head Organizer, and her staff took us to the first area not that far from where we were staying.  The big issue originally had been the wastes and smells coming from a industrial food processing company that dominated the area.  We were meeting on the 2nd floor patio of one of the members, and even a kilometer or more away, we could still smell the plant.  They told us the cleanup had been effective, but there was still engagement with the company on pollution and smell reduction.
The group had grown so fast in the last year since its founding that there were several “sections” that met and acted on various issues.  Each section consisted of two long blocks with about 70 dues paying, family members in each one.  In one of the other sections we visited the school where the organization had also managed to mount a campaign to force garbage collection partly spurred by finding rat bites on some of the children that were emanating from the dump area.  We all walked among the receptacles now and could see the progress for ourselves.  The third section was a work in progress.  There had been a victory when the group forced the Mayor and the head of public works to come into the neighborhood and deliver sanitation.  We looked at a small stream that had become — and still was — a dumping ground that would need a more aggressive program.
In another vecinos the group had won an expansion of electricity service to 18 hours a day from the 12 previously.  Power outages and shortages are epidemic in the Dominican Republic.  In my first visit to Santiago many years ago with Maria Polanco, Marisol, and Brother Hamilton, we had eaten breakfast with Maria’s family here and had left before 9 AM with the lights still not on.
There are two Club ACORNs in Santiago.  The first meets in a large community center and because of the high unemployment of women has become as popular with the mothers of the neighborhood as the children.  They had arts and crafts that they had made on display and on sale to supplement inadequate incomes.  I bought a beautiful piece of art that that was done on plantain leaves.   Indescribable!
Our final stop was up a dirt road (paving this road is a high priority for the group!) where a crowd of children and the director of Club ACORN waited for us with a lot of parents in the neighborhood.  They had painted a huge welcome for ACORN International on the wall above the blackboard.  We were all seated up front.  They showed us a video of the Club.  We heard some of the children speak about what Club ACORN meant to them.  We toured the property and heard about the success of their fundraising efforts to buy the property where the Club is located (only another $4000 USD and it’s theirs).
Some of the guys in the neighborhood then came in to play home fashioned instruments and the beat was on.  The mujeras wanted to dance, and the next thing we knew we were all dancing!  We weren’t just dancing though we were being swept along in the fast moving, hip popping meringue.  There was nothing subtle about any of this.  If you were near the dance floor, one woman after another would pull you into the dancing.  Next thing you knew a woman a foot shorter was twirling you around, and you had to either learn how it worked or find your gringo ass falling on the floor!  An hour later we were all — men and women of the ACORN International delegation — drenched with sweat, grinning like kids, and happy and exhausted as we climbed back on the van to head back down the hill.
ACORN International in Santiago more than rocks! 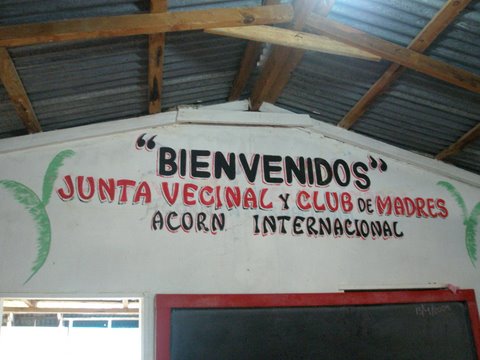 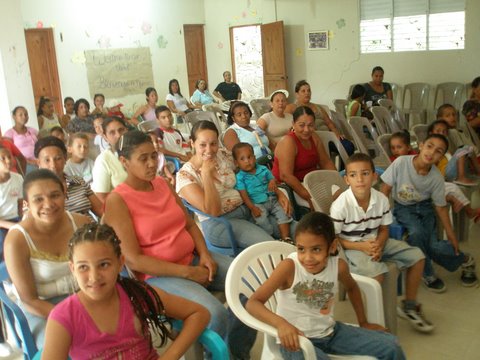 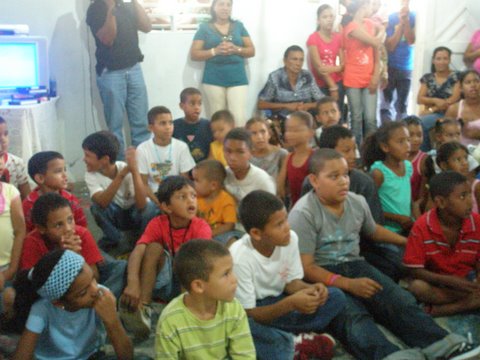 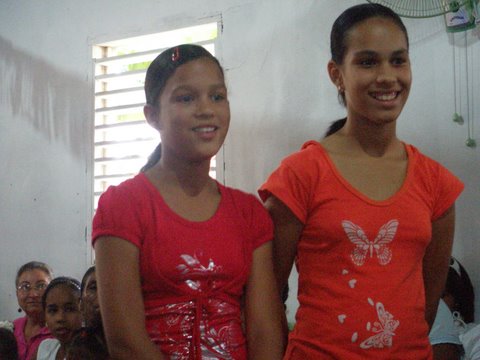 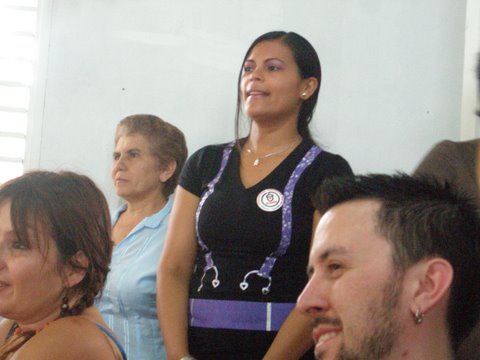 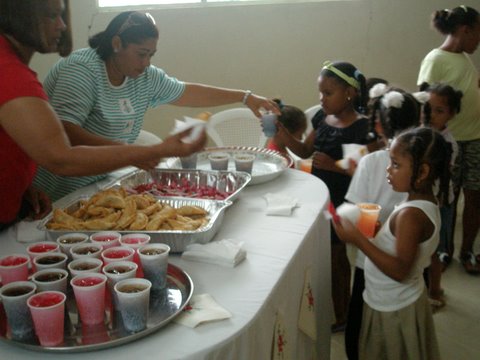 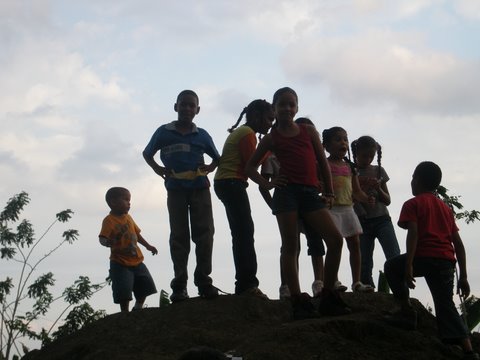 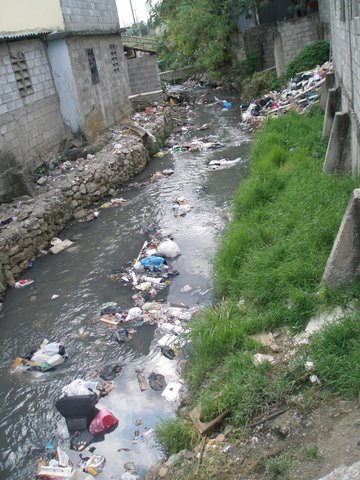 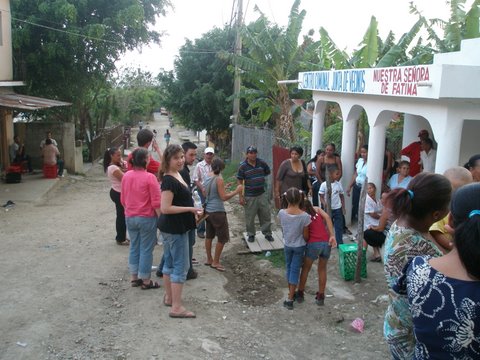