New Orleans: We were on vacation.  We had too much time!  We were riveted to the television set in a way that would not have been possible at any other time.  We flipped channels between CNN and BBC over and over, mesmerized and horrified.  We bought papers whether we could read them or not, whether they had any new information or not.  Living in New Orleans less than an hour from bathtub warm and swallow water on the Mississippi Sound of the Gulf of Mexico for decades we have spent hours, weeks, and days either splashing in the water or having it handy within a few hundred yards.  We had never plotted the distance there to fun and frolic, fishing and food, or the range of the rest of its possibilities as the same distance between life and death.  Now we had to do so.  We were watching the scenes of a whole world tipped over by waves of water taller than trees being sent directly from hell by an underwater quake were devastating.

Furthermore, over the last several years of trips with organizers and the Organizers’ Forum, these parts of the world were no longer simply foreign, but they were also familiar.  We had been to India and Thailand.  Later this year we are on our way to Indonesia.  We have ACORN members — and staff — in the US and Canada from all of the impacted areas.  This was no longer something out there.  It was personal.

I also knew the AFL-CIO had its Solidarity Center based in Sri Lanka and Pete Castelli, and community and labor organizer I had known over the years from here and there, had just moved over there with his wife and baby.  I sent him a note after several days to make sure they were out of harms way.  In a coincidental way they were part of the exponential variations of fate that separate our lives from disaster and had decided at the last minute to go towards the hills for a holiday and declined a trip to the beach.

Pete and his wife, Emily, were able to give us a different, if perhaps more horrible, context to this tragedy from their personal experience housing American refugees, helping at the embassy, working with nurse union members to try and get to the scene and do something, anything to help.  Some of the more poignant stories had Pete helping go through the mess of the well reported and record setting train catastrophe and seeing two of the cars still buried in mud and personal mementos, including address books and other items.

What is there new to say?  What can anyone add?

Here are two pictures from Sri Lanka — one of Pete and some of the members of the local nurses union going to the scene and the other of a small part of the scene.

The Tides Foundation — along with hundreds of others has the ability to take donations and get them to grassroots efforts for relief.  If you want to help that way, contact Tides at www.tides.org  and specifically Catalina Ruiz-Healy at 415. 561. 6345 or chealy@tides.org. who is all over this problem. 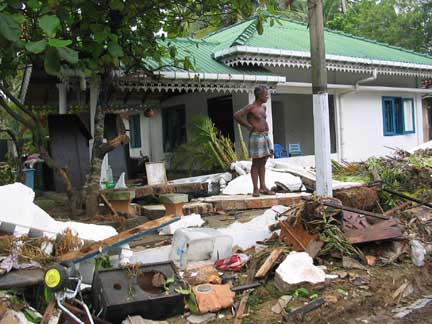 Surviving the catastrophic Tsunami.
Nurses standing by for assistance. 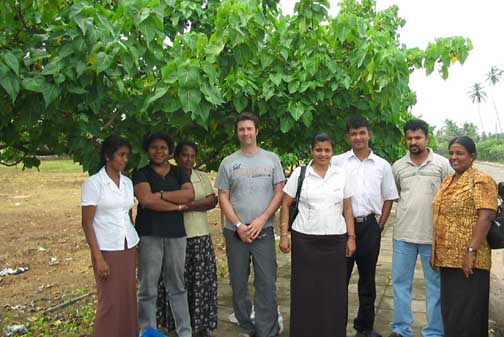