Sheffield     ACORN in the United Kingdom is known largely as the ACORN Tenants’ Union, and no matter where we have organized, the affordable housing crisis has come to the forefront even though there is a long list of other issues.  We have embraced our reputation and work as a union whether on eviction defense, landlord licensing, reforms of letting agencies, and best practices from rent levels to health standards for units. 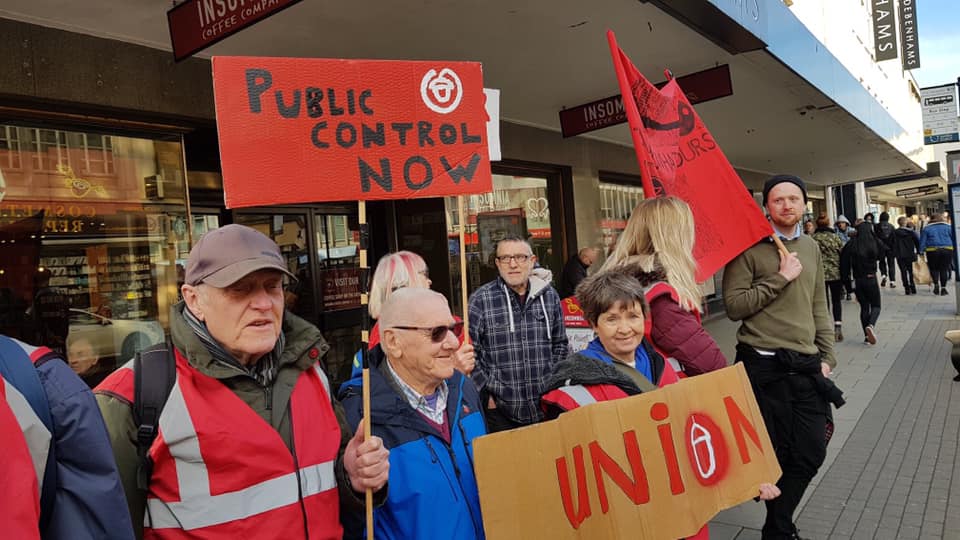 But, that’s not all of course.  In Sheffield, Manchester, and Bristol, bus transportation has become a huge issue for our members.  An action in Bristol on the eve of my arrival in the country with more than one-hundred members was dramatic and well publicized as ACORN members rallied over their concerns and issues with the bus system.  The action featured a eight-foot long cardboard bus held up by the members as they marched.  Made the point!

What’s it all about?

In England the bus system has been privatized for quite a period of time, yet cities have more or less control over the private contractors, which in Bristol and some other cities is the multinational First Bus company.  The heart of the ACORN demands is that a franchise system that provides more public control of the system is needed.  London is the model franchise system in England through Transport for London.  ACORN members in each city, no matter the contractor, are demanding more control over the fare rates and the routes.  The company is blaming the cities for congestion slowing the routes and not providing the subsidies that would involve lower fares. 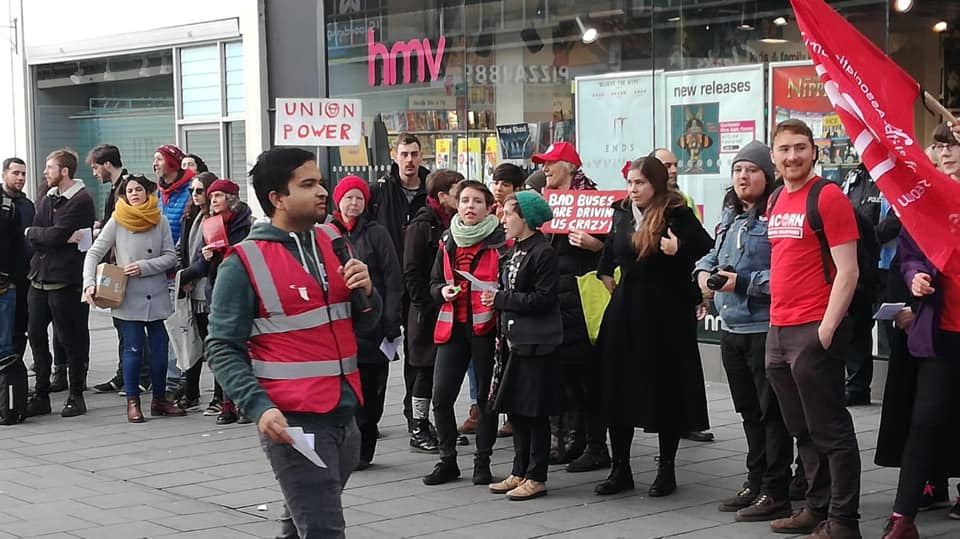 Car ownership is not ubiquitous in the way it is in many areas of North America outside of the largest cities like Toronto, New York City, Chicago, and others where subways, streetcars, and buses are able to move the millions.  In Manchester, trams made a big difference, but in cities like Bristol, transportation is a more difficult proposition. 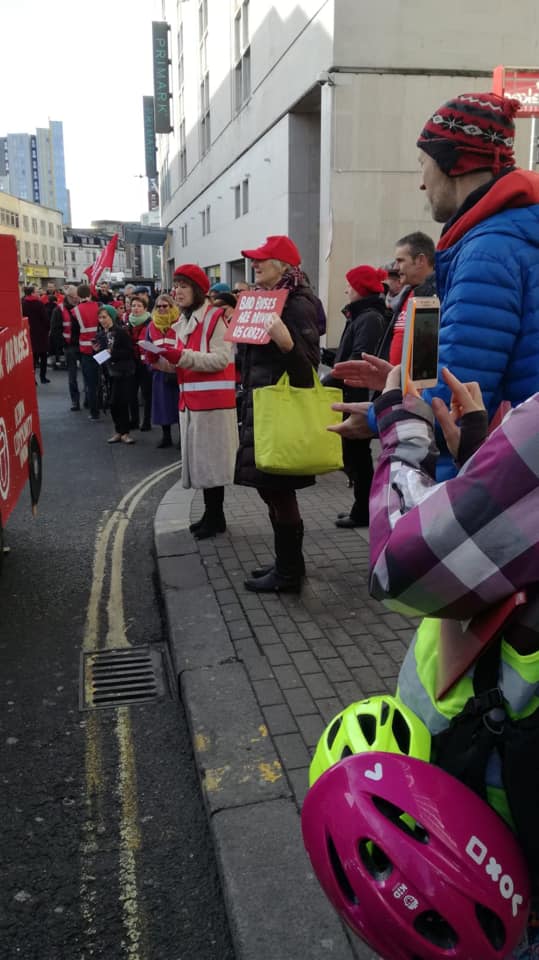 Many studies around the world have established that the higher the fares, the lower the ridership.  More than one-hundred cities around the country offer free transportation.  Some cities are now experimenting with providing free bus service on the routes with the most low-income riders from home to work and back again.

None of these experiments and proposals that are citizen and customer facing seem likely in a totally privatized system.   The report in “Bristol LIVE” of the bus action seemed mainly a platform for rationalizations and finger-pointing from the regional manager of First Bus at the city, the riders, and about everyone else anywhere in range. 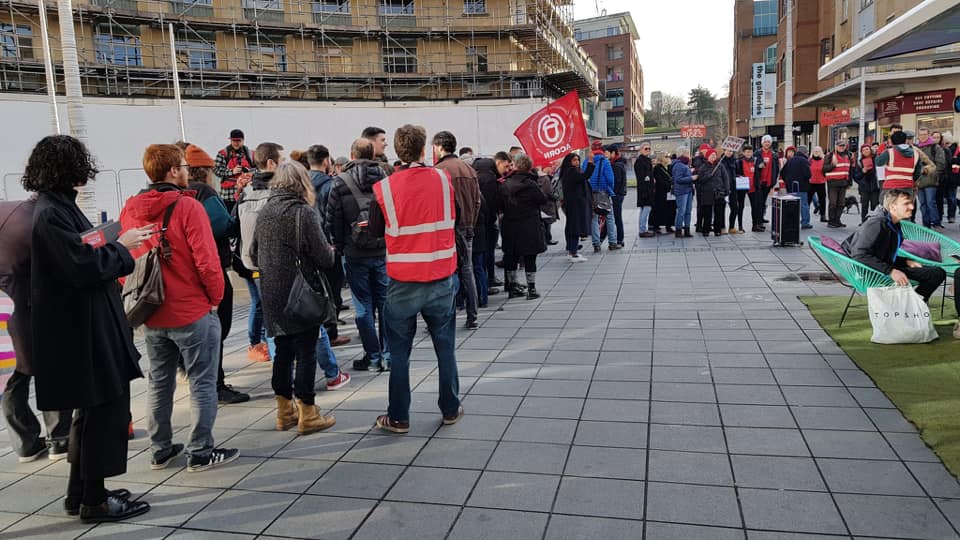 All of which will deepen the commitment of ACORN in England in pursing reforms at the city level to improve bus transportation which the members are demanding. 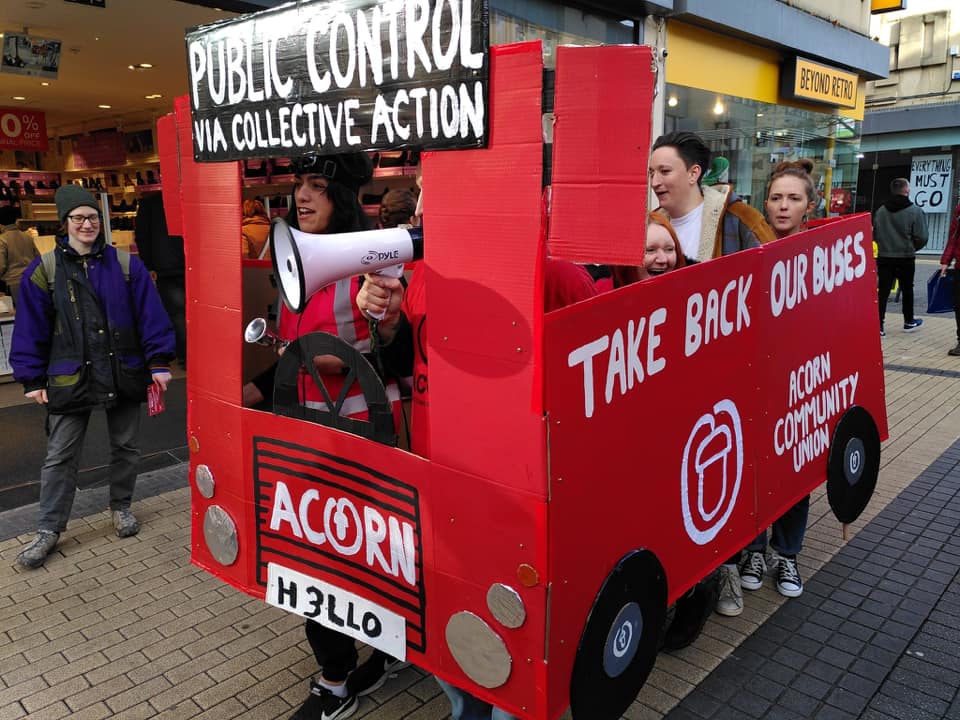 Manchester     A lot changes in eighteen months.  I was in Manchester for the first time as our new chapter of ACORN in the United Kingdom was organizing in July 2018.  I found the city pretty impressive, though didn’t get to see much of it in a quick trip in-and-out between cities.  I fell in love with the Peoples’ History Museum and wished every city was fortunate enough to have such an institution.  We showed “The Organizer” documentary then, moved some Nuts and Bolts, and most of the questions were essentially “What’s to be done with Trump?”

The chapter is now booming with great full-time staff, headed up by Kat Wright, and adding more.  The office is in space run by Partisan, a local art collective, and closet-sized now, reminding me of our longtime space in Edinburgh, which might have been slightly larger to tell the truth for ACORN Scotland, but we’re adding several more rooms, so it will all be different whenever I have the chance to come back.   I got to see more of Manchester moving back and forth on the tram to the office and forging the city to find an eyeglass repair location in a good-sized city center mall.  I was impressed with the number of cooperatives.  The Co-op was a giant supermarket chain with an impressive, glass-encased headquarters building near our office.  There was a cooperative bank with a statute of Robert Owen out front, an early 1800’s inspirer and founder of the cooperative movement.  They seemed to be everywhere.

The idea was that ACORN had grown so much in many of these cities that we should show “The Organizer” again, especially to give newer members an opportunity to watch it, and to ask questions.  This time meeting in a huge Methodist meeting facility, decorated with photographs of the damage the building had sustained in a 1941 German bombing, almost forty people crowded into the meeting room.  We had some last minute drama when the first two or three computers didn’t have a fitting that would connect to the projector, but we were saved by one of the members, and the download was in its last minute when the meeting was called to order right at 6:30 on a misty, foggy and cool evening.  I snuck out next door, so could hear the movie as I worked on the agenda and my report for the Year End / Year Begin meeting that will be waiting for me on my return to the USA, but was back for the Q&A.

This time no one wondered about Trump.  In the aftermath of the recent election called by Prime Minister Boris Johnson, many in the crowd were living their own nightmare now.  There was handwringing about the decline of unions that had provided the firewall for the Labour Party in the north and the concessions with companies and government that had now seen this sorry situation become the new normal.  Having firsthand experience in the campaign with a steady diet of lies and fake news, a number of questions hit squarely on the issue of how to defend their ACORN chapters against the potential assault of similar attacks from trolls and Fox News types now proliferating in Britain.  Concerns were expressed that the defeat in the election was so dismal that it could mean five to ten years of Conservative Party rule, austerity, and further destruction of what remained of the National Health Service and the British safety net.  Where our work centered on tenants and housing in the UK, one person asked whether housing was likely to be sustainable as a centerpiece of our work.

The worry beads were out everywhere, even as the enthusiasm and commitment of our members was soaring and they braced to meet the future.  The big change is that the horror many had seen in Trump a year-and-a-half ago, had now found fertile soil in Britain, and people were looking for answers to meet the challenge now on the home front.