Little Rock      Representatives from ACORN, Local 100 United Labor Unions, Labor Neighbor Research & Training Center, and the Arkansas Community Organizations stood in front of St. Vincent’s Hospital in Little Rock.  The same group was front and center at Ocshner Baptist Hospital in New Orleans along with leaders from A Community Voice, ACORN’s affiliate in Louisiana.  In Houston, Local 100 representatives stood in front of the Methodist Hospital.  They were all there to release a path-breaking report entitled “Charity for Whom?” about these hospitals and more than 130 others in Arkansas, Louisiana, and Texas and their record in providing charity care to lower income and working families in the three-state area.

Each of these three hospitals provided less than 2% of their gross revenues in charity care, while enjoying the benefits of tax exemption as federally classified nonprofits, dedicated to charitable practices.  Tragically, they were not alone.  Most hospitals in their states were as bad, worse, or not much better.  In fact, the report indicated that if all of the hospitals in these areas provided even as little as 5% of their gross revenues to actual charity, then more than one-billion dollars of additional charity care would be provided to more than one-million more people!

“Charity for Whom” came out of a five-year investigation of publicly available documents nonprofit hospital are required to file with the IRS.  The partners in the Nonprofit Hospital Accountability Project, Local 100 United Labor Organizations, ACORN International, and LNRTC, came together after the passage of the Affordable Care Act.  The impetus was an amendment to the Act developed by Senator Chuck Grassley (R-IA) that demanded that nonprofit hospitals provide increase charity care or potentially lose their tax exemption with the IRS in charge of assessing their performance.  The Act passed in 2010, and hospitals were given five years to get their act together for this amendment to take full force. 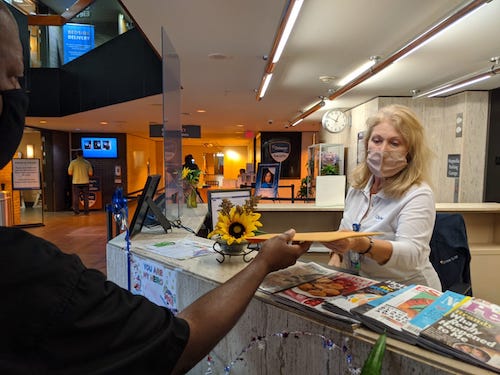 The Project was designed to see how well they did.  The short answer is poorly on just about all counts by all involved.  Charity care has actually decreased since ACA passage throughout the country.  Tax-exempt nonprofits hardly do better on average in providing charity than for profit hospitals.  The IRS has only stripped the tax exemption of two hospitals that we can determine, one for not posting required notices and one for being for profit, but pretending otherwise, and none for giving too little charity.  This despite the fact that the annual report by the IRS indicates that a huge percentage of these hospitals are subject to additional examination after they file.  The IRS refused to respond to FOIA requests by the project asking for the names of other hospitals investigated.  We found that a significant number of hospitals are in fact not filing or not reporting their charity care at all.  Hospital CEOs were paid millions in many cases, but not managing for their mission, and in some cases making more in their pay envelopes than they provided in charity.

There is much to be done here, and the release of the report signals the beginning of a campaign that will not end until there is real change and open-handed charity.  Peoples lives depend on it!

Little Rock      Corporate chieftains’ claims that there is even such a thing as shareholder democracy has always been akin to an edict pronounced at a North Korean military parade to the assembled masses.  The notion that the little shareholder has a voice in corporate governance is simply an archaic corporate conceit more suitable to a new Hollywood version of Mr. Smith goes to Silicon Valley or Wall Street, than anything in the real world any of us will experience.

Nonetheless, against overwhelming odds, citizens organizations, environmentalists, and even religious groups, especially those led by feisty, committed groups of nuns, have employed the tactic of introducing stockholder resolutions to challenge publicly-held companies, large and small.  Even losing, which is the fate of most of these efforts, reforms have sometimes been won by repeated efforts, and certainly they have frequently gotten the attention of the bosses and the public that something isn’t kosher with the company.

The Securities Exchange Commission or SEC regulates all of this, and by goodness with the Trump team controlling the majority they want to put the kibosh to as many of these resolutions as they can, essentially painting them as nuisances, rather than internal voices for change.  In a partisan 3-2 vote on a final rule, they are laying out new rules to take a flyswatter to these trifling corporate annoyances and democratic pretense.

…a final rule requiring shareholders to hold $25,000 of stock for a year, up from $2,000 currently, in order to submit such proposals. That threshold will fall to $15,000 after two years of ownership and to $2,000 after three years, setting a sliding scale that gives priority to longer-term shareholders. The new rule also raised the percentage of votes that proposals must receive to be resubmitted—and prohibits multiple shareholders who don’t individually meet the minimum thresholds from joining together to submit a proposal.

The story adds that SEC economists estimate that this will get rid of between 50 and 75% of the resolutions.  Not that they are all that successful with a big law firm report thus far in 2020 finding that

…15 of 303 shareholder proposals related to environmental, social or political issues submitted were approved … including four on climate, three on workplace diversity and five on political spending.

As I said, this is a tactic, not a strategy per se

But who does this really stymie?  Certainly not the big retirement funds like CALPERS in California or the New York City Employees’ Retirement System, that alone has submitted over 1000 resolutions in the last 35 years.   Big funds hardly buy a team dinner for less than $25,000, much less stock in a company.  When they buy, it’s a check for millions.

In effect, the SEC, as a servant of Wall Street and its ilk, not the little investors, is clear that if you write a big check, then no problem, you have a big stick and a bullhorn.  If not, shut up and get out of the way.

You know on second thought, maybe I’m being too hard on the SEC and the corporate definitions and pretense of shareholder democracy?  They actually may think they are simply creating a system modeled on the current practice of American democracy, where it is also true that the bigger the check, the louder the voice, and citizens, just like shareholders, need to shut up, get out of the way, and do what the big boys want.