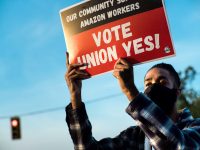 New Orleans      This is like the version of the old joke. What’s the good news? The union beat Amazon in the election. What’s the bad news? The union beat Amazon in the Bessemer election. Stated another way, what would have happened if the dog had caught the truck? In short, you think the election campaign was hard, then you can’t even imagine how difficult it would have been for the union to get a decent contract.

Look it up on Google. None of the figures are up to date, given the world-shaking expansion and growth of Amazon both here and abroad in the pandemic. Ask Google how many fulfillment centers, another name for warehouses, that Amazon has in the US, and 110 will pop up, but you know that number is light. There’s an announcement of a big center in Slidell, across Lake Ponchartrain north of New Orleans. Driving into Atlanta, the construction along I-85 makes it clear that Amazon is doubling the size of their existing warehouse. Believe me, there’s one coming near you! Nonetheless, let’s say 110 is the number. The headlines are all about the fact that Amazon now is the second largest US-based employer after Walmart with over one-million workers. How many workers does Amazon have in the US? North of 600,000 is probably an undercount.

In a better world that is not this one, RWDSU, the union in this chase, would have beaten Amazon, and they would then have the legal right for one-year to bargain a collective agreement without the company challenging whether or not they had the support of the majority of the workforce. Make no mistake. That’s all a union wins with an NLRB certification of an election victory. If the numbers had been reversed and the union had the almost 1800 votes and the company had only 800, then the company over the year allotted for bargaining – after they might have filed objections – can’t challenge the union’s majority of those voting, which is to say, refuse to bargain, but trust me on this, the fact that 4000 workers had NOT voted for the union, just as in this case they had not voted for Amazon either, would have been a constant refrain.

In the poisoned collective bargaining regime under the law now with the union at best only able to bargain for 6000 workers or 1% maybe of the US-based workforce and less than 1% of the fulfillment warehouses in the USA, what are odds that the union would have won a decent contract? I’ll answer that by saying, pretty poor.

Our local union won an election with the Hyatt Regency hotel chain for the first time in 30 years in New Orleans in 1980. It took us seven years and a trip to the Supreme Court to get a contract, and we couldn’t hold onto it. Ouch! I can remember arguing with Tom Woodruff, the great SEIU organizing director, about why they had negotiated away the ability to organize HCA hospitals in Louisiana in order to pickup a couple of their facilities in Nevada and maybe Texas and done so without telling me. His answer was unforgettable: “Wade, I did you a favor. You might have organized them and then had to spend the rest of your life trying to get a contract.” I didn’t like that answer, but that didn’t mean that Brother Woodruff didn’t make a good point with a lot of truth to it.

This is the problem with an organizing strategy that is not about really building a union, but more about hopes, dreams, and hot shops. Carrying a torch for a victory, the union and company would have known that they couldn’t strike if they thought the contract on the table sucked, or it would allow Amazon and other anti-union companies to plummet the union on that issue for a generation. To get a contract, they would have had to walk back the messaging of better wages and benefits, and instead talk about reducing turnover and the protection of a grievance and arbitration system, because the odds that Amazon would offer more than pennies in wages and bennies than it had for the rest of its 600,000 workers and 110 warehouses, is zero. It wouldn’t have happened. Full stop. If you promise more than you can deliver, it will bite your butt, and the union would be racing to settle something before the other 4000 workers – with the company’s implicit yet invisible support – would start a decertification petition.

This is not a happy story, but it is a call for a different organizing strategy that bypasses NLRB elections and even collective bargaining, and instead focuses on building a union at Amazon on the backs of real membership among the workforce and taking action on the job with wins large and small until real power and density in the company is achieved. It would take time, people, and money, but there’s abundant proof that it would work. It’s almost impossible to win this way, and I guarantee the odds would be better that way.

New Orleans               The postmortem on the Amazon organizing campaign and union election in Bessemer continues, both among close observers and organizers, as well as the many in business and politics with their finger in the wind trying to gauge the future of union and worker power in the American economy. A friend and comrade active in the European labor movement while living and working from Berlin shared an interesting perspective published in Against the Current by the well-regarded professor and researcher San Francisco-based John Logan entitled “Bravery, not Blowout.”

In examining the election, Logan makes a number of solid points. Certainly, the decisions by organizers on the ground were difficult, and should be respected. Absolutely, anyone not personally active in the campaign wouldn’t have the same information as the union in the fight. Categorically, none of us as organizers like being second guessed, even as we know we do our best and live with the consequences of our decisions. I appreciate Logan’s full-throated advocacy and defense.

Nonetheless, as inarguable as it is that workers were brave in this campaign, that doesn’t alter the awesome weight that union organizers must carry about how to use that bravery the best and husband it to build a union. Nor, as I’ve argued before, does raising the potential vote count for the RWDSU in this contest to 1000 votes by resisting the company’s tactical use of vote challenges to depress their vote, change the fact that it was a devastating defeat, and fairly characterized as a “blowout,” not matter how the shoe pinches. The loss would have still been almost 2 to 1, and that doesn’t count almost 2500 workers who resisted the union’s campaign and voted their indifference in the contest by simply not voting. 1000 votes out of almost 6000 is fairly stated as a blowout.

Logan argues that all of the debate and publicity on the election in some ways makes it all worth it. Perhaps. We all certainly hope so. I believe that would have also been achieved as well if the union had chosen to block the election by filing unfair labor practices, and that it would have acknowledged the bravery of the pro-union workers without forcing them to live through a humiliating defeat.

The real problem in how we count the chips as they fall as organizers may be how we understand handling a “hot shop” of workers versus actually building a union. There is no union organizer who has not fallen prey to the “hot shop” dilemma. I have never been able to say “No” to a group of workers, tenants, or community residents who want to organize. No matter where they are around the world, I can’t ever help but say “Yes!” But, even as I say, yes, and encourage and support their efforts, I am never confused about the fact that my work is not to simply mobilize their energy and anger, but to help them build an organization and wield power. Knowing that, hard experience and bitter defeats have taught me that there may also be times that I have to tell brave and steadfast people that we will lose this battle and must focus on building to eventually win the war. Organizers are not paid by members for their passion and empathy, but for their ability to present options, learn from experience, and exercise good judgment.

Building a union is different than mobilizing workers. A thousand workers in motion and voting for a union is indeed something, but the history of the working class and its struggles doesn’t teach that losing is a good thing. If we organize continually, we will win some, but even at our best, we’ll lose a lot, given the odds and our opponents. Mobilizing workers to act, to speak, to vote, has real value, when it happens, but doing so is different that organizing a union to make sure it always can happen and be sustainable.

Thirty-six years ago, I filed for an election with a great committee and 71% card support at Textron, a big shipbuilding operation in far east New Orleans. The campaign was long and hard. I could tell they had broken the committee and our assessments were turning bad. In an organizing campaign with some experience, you can smell death. The election was right after Thanksgiving, the company had posters with my head and a turkey-body. Our daughter was born during the campaign. What was left of the active committee, now isolated and attacked, wanted the election to make the price they paid worth it. We lost 2:1. I drive by that facility regularly now. I never heard from a single one of these workers after the election. The plant is still non-union.

Well-known now for her stint heading Planned Parenthood, Cecile Richards, while working as an organizer with our local, passed down a lesson from her father, who during his time was the premier union-side labor lawyer in Texas. He would say, “workers never have the right to vote NO against a union.” Think about it. I’ve never forgotten that maxim. Workers don’t advance in defeat. These aren’t “character-building” life-events, but contests to build collective strength through unions.

It still happens, as it did with us at Textron. Sometimes you roll the dice and get lured by false hope. Our job though is still to build the union and to put workers in the best position to win, not lose, and that means always protecting their organization and the ability to fight again, and win then. Workers pay the price in losing, even if the union, like RWDSU, goes on. If the job in Bessemer was to build a union there to honor and serve these Amazon workers’ bravery, I still believe blocking the election to allow those workers the chance to fight again in other ways, on firmer ground, and win, was a road not taken, yet available. It isn’t finger pointing to ask for an evaluation of other paths. As organizers, we owe it to the workers we serve, because there’s always a next time.