Baton Rouge and New Orleans      In mid-afternoon I pulled out of Baton Rouge for New Orleans and broke through the traffic gridlock that surrounds Louisiana’s capitol now. It was the kind of bright, clear early fall day that makes New Orleans so special.

The stench was everywhere around the office. Gene’s Poor-boy Shop had refused to clean their refrigerators while waiting on the insurance people, so one could almost taste the air, and it was nasty. Stepping into the office was a relief and a momentary respite.

Little things under the skilled supervision of Super Scott showed great progress. The front of the building and the annex had been repainted. The new roof was on and shingled, so we were now secure. Offices upstairs without damage had all been repainted and repaired and looked fantastic. One could easily see that we were coming around the corner in some ways. Once the sheetrock came and Scott’s crew could attack the offices where we had cut out the ceilings, the job would start to fall into place quickly. There would be a long punch list, but one could see that the first of the year was a very possible goal — if we could get phones and high speed access.

The adjustor of course did not show and was now due several days hence, but thankfully, he had finally approved the roof work, so it was a pleasure to talk to the roofing crew in Spanish and find out where they were from in Mexico and watch them in the dusk finish the first day’s sheeting that will finally save the house from the rains that will always be coming soon in New Orleans. Maybe later today the whole roof will be up and one huge problem will have been prevented.

I shared Scott’s pride about whether or not the office in Marigny and my house in Bywater might have been the first places where one could hear a hammer hitting the wood. We were finally getting ahead of the game. In the foolish way of men we felt like we were starting to run the show, rather than having this huge natural and environmental world continue to run us as it had for two months now.

We looked at some other projects, wrote checks, and figured out this and that. I noticed a flyer stapled to telephone pole that said Elizabeth’s, perhaps the premier Bywater eatery, was opening back up on Saturday. I pointed it out to Scott and told him finally there might be lunch in the neighborhood. Driving back from one of our stops, I swung by to show him where he could find Elizabeth’s on Saturday, and darned if someone wasn’t walking out of the cafe, looking fat and happy. I stopped and shouted at them whether Elizabeth’s was open, and sure enough minutes later we were all sitting down to eat hot cooked food at now much higher prices, but still within blocks of home.

Everywhere in the Bywater the signs of life seemed to be coming back. Refrigerators were now standing like soldiers guarding all the dark houses and waiting for the Guard and FEMA. Fire trucks were parked all around my old house and St. Vincent’s Church and NOCCA high school which were now acting like a fire houses for twenty or more fire engines that had been knocked out in the storm. Lights were on from place to place and cars were parked in front. It wasn’t back to normal, but the signs were there that people had been back and were coming back.

One more troubling sign in the neighborhood was repeated from the last visit. U-hauls were packing folks up to move out. Governor Blanco’s order had expired and landlords were now evicting tenants who had not come back or were not paying. Other folks were making their way back and packing out to higher ground.

Leaving Bywater to drive back, I felt a little more optimistic than I had on my last several trips to the city. I turned onto Franklin and drove up to St. Claude. Looking down Franklin and across St. Claude, it was all pitch dark and foreboding, I thought to myself, “why do that?” and turned left in what used to be an illegal turn, when New Orleans had streetlights and traffic, rather than being a city of stop signs. I drove down to Elysian Fields thinking those neighborhoods would be lit up and back in action. I turned right onto Elysian Fields to drive to the Interstate and was once again immersed in total darkness.

From St. Claude to the Interstate there were occasional street lights, but as one looked on either side into the neighborhoods it was mostly just completely and totally dark. It was eerie and unsettling to drive through a city that had a heartbeat coming back near the River and was still stuck in an unreal coma as one moved away.

Making the Interstate one could see downtown and some lights flickering as if there might be some businesses downtown, but one looked across miles and miles of darkness before one’s eyes could see the flicker of light. 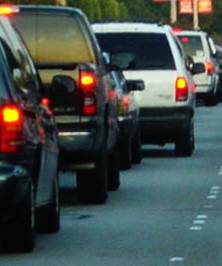