New Orleans     I worked in New Orleans while hunting for candidates to run for Mayor of New Orleans on Friday. Running in the morning at dawn on a workday was still eerie. It was all country quiet surrounding an urban facade. I passed two trucks contracted to FEMA loaded with the dead tombstone refrigerators a block from my house that had swept my street. The only vehicles moving on my route over a 3-mile stretch were three different National Guard humvees, policing the neighborhood. The traffic that had once struggled down my street to work coming into the 9th Ward from St. Bernard, trying to bypass St Claude was now non-existent, because for all intents and purposes the parish was no longer there.

By 7 AM Scott’s crews were forming up around my house, up the street, and at the office. Ladders and supplies had been shuttled from our staging area on my block since before dawn. This was Bywater springing to life. A white suited crew as working on the Alvar Street Library catty corner to our house. The books were gone. Shelves were being uprooted and replanted in a dumpster now holding pride of place in front of the library. No one would take a bet that a school child or a neighbor would ever again walk in those doors and pull and book into their hands to carefully inspect. I could stand in the street and look up towards the tracks and see the street blocked by FEMA contractors one way pulling “white” goods, and look down towards the Industrial Canal the other direction and see another street blocked as a bobcat scooped up piles of refuse of all kinds and descriptions into waiting dump trucks. This was a constant and daily process of the on-going cleanup.

FEMA indicated that their work on cleanup may mean a bill to the State of Louisiana for $3.7 Billion dollars. Governor Blanco has called a special session to begin on Monday. The state is hemorrhaging financially, so this will just be another bill on the stack. I called the phone company finally to cancel the phone line at the fishing camp. They were actually very kind about it shutting it down, though they had not exactly been shy about continuing to send bills. The woman said they would send someone over to cut it off, and I told them not to really bother, since there was no phone, no phone line, and no pole — it was all gone — so why have a good CWA member waste a trip. She understood. Like the Governor, I put that bill on the stack with the others.

Schools are in disarray, because there are none. This is a big subject of the “call.” The state wants to take over the New Orleans school system. I wish I could believe that was a good thing, but I just can not seem to get to that place because of its total disregard of any semblance of democracy or citizen input. The authority would somehow be cloaked in the travesty of No Child Left Behind. The school board helped this along by unilaterally closing the public schools for the entire year forcing all school aged children away from their homes and making this a city without the young. The school board would run a small district with only 13 schools. Another 20 would be in a special charter school district, even though most of them are large public schools able to operate fully. Another 100 schools here and there would be taken over by the state as non-performing under NCLB. This is a plan? The state will only say that the federal government and foundations, especially the Gates Foundation, are making this course of action too tempting to avoid. The feds have thrown out a $20 Million carrot to force the people of Louisiana to bend to the stick. What are you going to do?

Our daughter, Dine’, drove in from Tampa with some of her co-workers and friends organizing for Tampa ACORN and the Wal-Mart Workers Association, so that she could celebrate her 21st birthday in her own home in her own hometown. It was a special homecoming for all of us. The sounds of young women laughing and shouting rocked from the floors to the roof beams and made this old, wounded house feel alive and well again, along with all of the people inside it.

She brought a smile everywhere to the Bywater. We saw that Danny’s Texaco (which had not been a Texaco for 10 years but once was, so would always have that name) was open on St. Claude, so we stopped to get a brake tag, since the one on the truck was now long expired. There was no inspection amid all of the celebration. Dine’ took a picture of Danny and his wife in front of the station. His wife told me that they were ok in Kenner with hardly any damage. Danny’s ex-wife from 20 years before and a couple of other people were living with them. I asked how that worked out? “Whatever…,” is all she said with a look up to the darkening and overcast sky.

In the early evening we took a break to go buy some plants at Harold’s Nursery across St. Claude at the Press Street railroad tracks. Standing in front of the truck, we saw the caravan hauling Prince Charles and his consort along with a trailing crew of humvees, ambulances, police, fire emergency vehicles, and the usual set of long black limos heading downtown on St. Claude so that the Price could inspect the damage in the Lower 9th Ward.

He talked to some folks working around what was left of their houses in the Lower 9. They also dropped in on a private schools, since that is all that is open in the City.

According to the AP story, he talled to “Yvonne Mirabin, whose home was in the Ninth Ward and whose 6-year-old grandson attends Cathedral, was almost giddy after
her exchange with Prince Charles. “I told him I was very glad to see him and his new wife,” she recounted. “He asked what he could do for us. I told him, `You couldn’t do nothing. It’s our own government needs to build the levees higher.”‘

No since mincing words even when talking to royalty, when you can still tell it like it is in New Orleans. At least we still have the ability to speak, even when no one may want to listen. 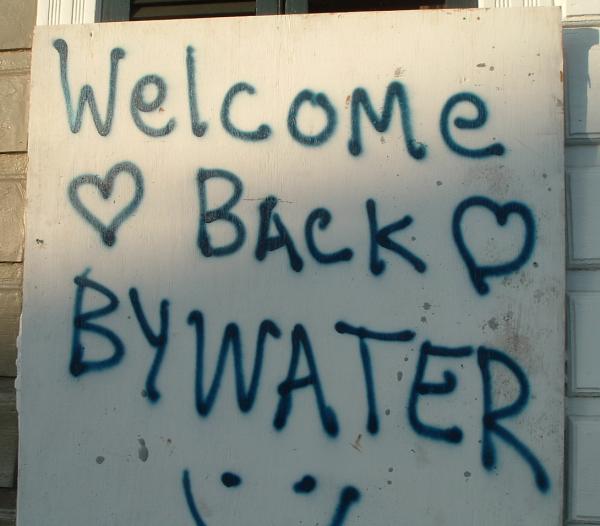 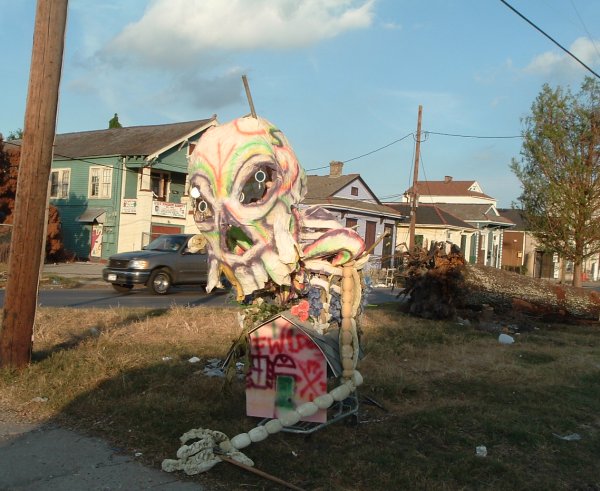