New Orleans One of the interesting things about working around the globe is the amount of time you end up spending listening to CNN and BBC World News. Some of it is frankly a challenge. Learning conversions between Fahrenheit and centigrade at this advanced stage of life at best gives me a sense of approximate temperature. I sometimes can understand the reports on soccer, but once they get “on the pitch” and start speculating about cricket with scores in the hundreds, take me out, coach!

I heard Pascal Lamay, head of the World Trade Organization (WTO), interviewed from Davos with a fetching red jacket and ski cap (I kid you not). He mentioned the shortfalls in India in opening up for foreign investment stressing the service and banking sectors and wisely not mentioning retail. Then one realized it wasn’t wisdom preventing his comment when he made a joke (yes, one of those snickering, we know it all, jokes) that India also needed to open up its farm economy though (the snicker came here) he understood “a 300 million person constituency of farmers was a serious thing.” No lie, Pascal! Let’s count the minutes until the government falls, why don’t we?

Some of it made me sympathetic to Elaine Cho, the abysmal US Secretary of Labor, who made a comment that Davos was “too Eurocentric” and needed more diversity from Africa, Asia, and Latin America. If Elaine Cho is an advocate of diversity, it must be horrendous in the snow banks of Davos at the World Economic Forum there.

I almost leaped from my chair when I heard that Serena Williams had come from unseeded (and derisively dismissed by the Brits on both stations!) to deliver a total arse (as they call it) whipping to the Russian #1 seed and dispatched her in a tad more than an hour to claim her 8th major and 3rd Australian Open. I don’t watch (or much like) tennis, but I was 1000% rooting for Serena to win!

Wade’s Law of International Travel: When American chauvinism no matter how misplaced begins to set in hard, it’s time to come home quickly! 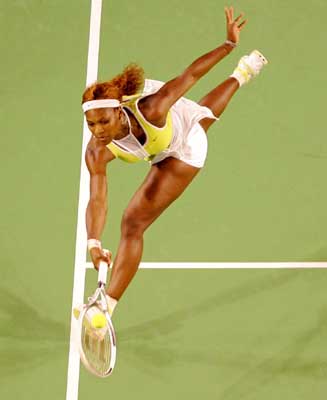 Serena Williams at the Australian Open