Santa Fe Since my life is on the road these days, I stay out of the loop. Nonetheless, I would have taken anyone’s bet that Tony Soprano was absolutely, positively, no-way, going to be killed in the “final” episode of the HBO Sopranos series last night. Art is at best a lucky collateral benefit of television, since basically it’s a business and totally about the money.

As A.J. (Anthony, Jr.) said last night, even as they milked the last foreboding shadows out of the show, they needed to try and “think about the good times,” and The Sopranos has definitely been the good times for HBO. [I also personally think that was a somewhat corny, but decent way to “sign off” for a while from the series, and although I am not a regular, I have watched a LOT of the shows.]

So, here is also how I will bet on this going forward:

First, this will not be the end. There will be more of the Sopranos. Not a single immediate family member (including Janice the whack sister) has died, so the reunion tour can happen at any time.

Second, at the least HBO and some partner will do “The Sopranos — The Movie.” The announcement will be within the next two years, while the brand is still fresh, and the movie will come out within 3 years. HBO will run it almost immediately after the theater release. Depending on the quality and box office of the movie, there will be a one sequel or more.

Those two bets are pretty safe and sound, because the money is clear and the way it works is obvious (well, to me anyway?), and I can’t imagine either HBO, the producer, or the stars not figuring out more paydays on this job.

Third, I would not bet on a return of the series. Why? It’s the money again, but more importantly, it’s the ability to have a voice on the air. The talent is David Chase on this (the producer and developer of the series), and HBO will try to do another deal with him as soon as possible for something else for their network, and he knows better to keep going to this one well and believing it will be fresh water, so he will go with another series.

This is the way these folks work — look at how David Milch made the deal to agree to kill “Deadwood” if he had a chance to do “John from Cincinnati” — anything not to lose his voice. This is also a universal rule of organizing, which is why it is so easy to understand. If you leave your organization, you lose your voice, so organizers that understand this universal law well, always make sure they keep organizing rather than lose their voice — their ability to impact the ways of the world.

Since that’s where my voice “speaks” as well, my venture here as a television critic and commentator will be the exception proving the rule. 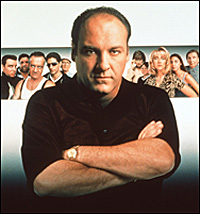