Mardi Gras Day, New Orleans
I am hardly a Hollywood groupie, but given ACORN International’s work in Dharavi, the Mumbai mega-slum, that was one of the “stars” of the movie, Slumdog Millionaire, I couldn’t claim to be disinterested.  Furthermore, ACORN India put on a different kind of Oscar-watch party in Dharavi that has now been widely reported in Mumbai newspapers and elsewhere, so let’s celebrate!
Here’s one story from the paper, Mid-Day:

Mumbai:
Any reference to Slumdog Millionaire will not seem out of place in Dharavi. In fact, so glaringly in-your-face is the similarity that you can’t help wondering if the place is throbbing with the sort of spirit the people in the film display. Fierce, defiant and picking on life with relish.
﻿﻿
A rag-tag bunch of college kids from the slums, who call themselves the Sout Dandy Squad, celebrated their glum-slum identity which has conquered the Oscars. ACORN India, a community-based non-profit organisation, which with its Dharavi Project, works with waste collectors, hosted a terrace party last evening where the five-member band took on the stage with their rap and Rahman nod.

Jai Ho! has become a cult anthem of sorts in the slums. Every kid identifies with it as a code and as a theme to rise above the risible in daily life.

Lead rapper of the band Slim Styler has composed a Recycle, a ditty which is punctuated with the philosophy of how these boys and their families living in the gutters recycle life. It is a tribute to their slow, but significant rise from ignominy. The band has every reason to believe they could be the dark horse in the long run, as ACORN and the Dharavi Project is helping them tap into their own inner voice to be heard out loud and clear.

To volunteer
To learn more about the ACORN foundation and how you can be a volunteer in their Dharavi Project, log on to http://www.dharaviproject.org. Call Vinod Shetty on 26428618 to volunteer for their host of events in aid of the ragpickers of Mumbai. 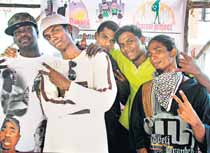