New Orleans     Since I’ve taken the burden of keeping the faithful reader up to date on tactical developments we see here and about as they come across attention, I wanted to share the work of group called Plane Stupid in Scotland that is trying to prevent airport expansion there for environmental reasons. The other day scanning the Guardian a picture caught my eye. Less than a double handful of Plane Stupid folks had dressed up as Donald Trump, cut a fence, and then proceed in the middle of the night to play golf (big thing in Scotland) in the middle of the runway. By 830 am they had all turned themselves into the police though several flights were cancelled in the mayhem. The full story of the first Plane Stupid action is at: http://www.guardian.co.uk/environment/2009/mar/03/aberdeen-airport-climate-protest Today they were at it again when a young woman seems to have heaved green slime as they called it on a minister as he came to a hearing. He called it adolescent. Unbelievably to me the Guardian commented that she walked away “unarrested.” Climate change protester throws green custard over Mandelson | Politics | guardian.co.uk Seems like Plane Stupid knows a thing or two about how to handle these matters over there, though I have no idea if they are winning the hearts and minds of the public, they certainly are getting attention to this runaway expansion fight. 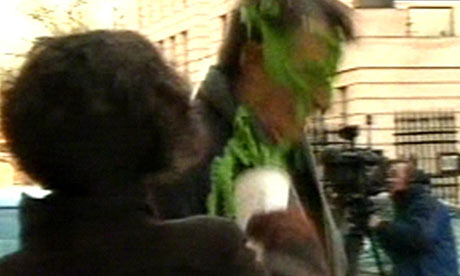