Washington       Iceland, as many now know though few perhaps care, became a modern contradiction of a small, rich, first world nation suddenly becoming the white bread case study of a failed state and an entire national culture standing for a portrait of fiscal excess and damaged credit. Over night the country went from hipster party zone to subprime nation. Nonetheless in the ways that I have taken on the light burden of updating the community on tactical developments around and about, I am compelled to share segments from a detailed story by Ian Parker in The New Yorker from the March 9th edition. Parker no doubt is bemused by it all so one has to overlook the creeping condescension in the writing in the modern equivalent of the city mouse visits the country cousin or the big city reporter works the frozen beat of the tiny town and country. The tactics though are real and speak as the best always do to the culture, anger, and demands of people, so that in the end a march of 7000 in Reykjavik even earns Parker’s respect when he does the organizing math conversion and realizes that such a march in the US would be equivalent to 7,000,000 people on the streets. Serious stuff! Anyway, here are some highlights: “Wind filled the black flags of a dozen or so young anarchists, many of whom had theatrically covered their faces with scarves. Some in this group did have experience in rebellion, having joined a continuing fight about the Icelandic government’s investment in aluminum smelters — and the power plants required to run them — in rural areas. The other protests were mostly older; they kept their hands in their coats, and frowned into the cold. Iceland’s winter revolt had no unifying color or motif.” Talking about one of the leaders, Edward Huijbens, “…noting one obvious brake on unruly behavior in a country with a population of 320,000: ‘if you/re in a rampaging mob running through town, within five minutes you’ll probably encounter your uncle.” And, on with the action…. “Iceland’s Central Bank was just a few steps away. A policewoman and a policeman stood guard. About forty protestors walked swiftly toward the bank and a chant began: ‘Out with David!’ [Prime Minister and head of Central Bank] Someone threw an egg that hit a wall and splashed a drop or two onto the policewoman’s shoulder. Two bananas landed at her feet. Iceland’s protests had a consistently culinary theme: skyr, Iceland’s yogurt-like specialty was often involved; that day, milk and cheese had been thrown onto the lawn in front of the Prime Minister’s office; and at an earlier protest I had seen a bag of potatoes spilled onto the sidewalk by the Parliament building — potatoes being the gift brought by Iceland’s Santa Claus to children who are out of favor. “Wearied by the fruit and the verbal abuse, or for some other tactical reason, the police withdrew. The protestors easily pried open the bank’s sliding doors and surged forward with a cheer — but into a low-ceilinged corridor that ended at another set of glass doors. These doors wouldn’t budge. Protestors furiously beat the glass with their fists and whatever else. Again: ‘Out with David!’ Beyond, we could see the marble lobby of the Central Bank, and, before long, a line of Icelandic riot police. On both sides of the glass, young Icelanders now found themselves in largely untested roles. (And, inevitably they were known to one another, or at last at one remove. ‘Everybody knows everybody,’ I had been told more than once.) The police stepped forward — an action carrying some hint of menace — and the protestors continued to bang on the doors and wear a cutout of David Oddsson wearing Devil’s horns. “But the rush of pugnacity was fading, and what had begun as an invasion was becoming a sit-in. Threatened by police with pepper spray, the protestors raised their hands to show open palms. They then sat on the floor, and sang, among other songs, ‘We’re all living in a terrorist regime,’ to the tune of ‘Yellow Submarine.’ An hour into the protest, the air in the unventilated corridor had soured. Astutely, the protestors offered to leave if the riot police withdrew first. The police moved back, to cheers. The corridor emptied and people drifted into the evening, stepping over eggshells. There were no arrests. Geir Jon Thorisson, Reykjavik’s avuncular and remarkably tall chief superintendent of police, stood near the doorway, like a clergyman seeing off his congregation. A protestor urged him to watch ‘Zeitgeist’ on the Internet that night after work; he apologetically replied that he had to go to singing practice.” That is a pretty good look at the inside of a lot of actions that many of us have seen. Oddsson lost in the end. 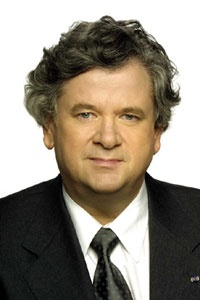