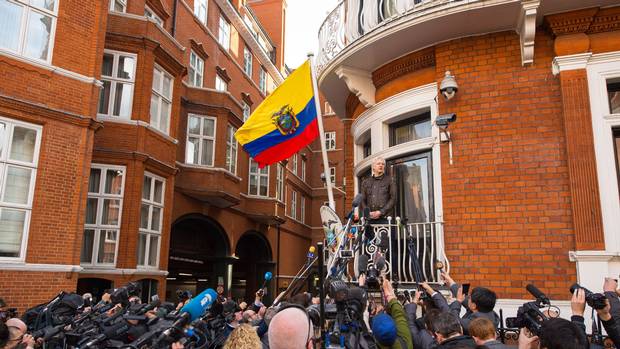 New Orleans     Julian Assange has been arrested by the British police on an old warrant from 2012 as a bail jumper as well as on an extradition order from the United States for hacking offenses.  This wasn’t your usual cheap motel out in the countryside pgoerp walk, but in what has to rank as one of the biggest eviction stories of the year, he was ejected from the Ecuadorian Embassy where he had been living since 2012 in the fancy-pants Kingsbridge district of London as a troublesome squatter.

Julian Assange had his heyday in founding WikiLeaks, an amorphous global collection of hackers and transparency advocates that released mountains of data on corruption in Africa, US military activities, and just about anything it could get its hands on.  Assange, now 47, has been a loose cannon throughout his time, shooting fairly straight at one point, but increasingly wildly and off target in recent years.  He also has this Swedish charge that is so confusing it almost defies logical explanation, but centers on something between rape and sexual misunderstanding, and has been on and off again, but led him into the hands of Ecuador because he was convinced the Swedes would hand him over the United States during the Obama days when Eric Holder was chasing him.  Now, it’s Trump and whoever he feels like summoning from Justice, so Assange is in a world of hurt.  If he hadn’t become so erratic and such a crazy man, I’d almost feel sorry for him.

Politically, it’s almost even harder to plot where to come down.  He had me on Iraq and Afghanistan, though Private Manning took the fall for it all, which tasted wrong.  He became disaffected from the WikiLeaks gang, splintering them in internal conflict with his absorption in his own role and fugitive status.  Out of reckless boredom and god knows what else, he has also been a pain in the south side to different countries, seemingly as much out of pique as principle.  The whole Clinton campaign email hack and the role of both the Russians and potentially Assange as a broker to release the information involving Republican dirty tricksters seemed the final straw.  A new government in Ecuador since 2017 with a more conservative slant and an interest in fence mending with the US and EU countries had clearly set the clock ticking for Assange’s eviction, including the fact that they kept shutting down his internet connections because, as usual, Assange couldn’t behave.

What do we do with him now?  Will he end up in a US jail diverting attention back to the 2016?  Would he have any credibility left if he finally answered questions about his connection to the Russian data dump or Roger Stone’s Trump shenanigans or anything else?  Would he ever have the present of mind to make a deal? Will WikiLeaks once again crash-and-burn trying to defend his every move as they try to make him victim and martyr?

I’d like to feel for the guy and stand for some of his original principles, but darned if it isn’t hard when he keeps making such a mess of everything when he makes it all about Julian and less about justice. Houston James O’Keefe, the delusional, self-aggrandizer, copped a plea with his young, right wing buddies for the weird caper at Senator Mary Landrieu’s office in New Orleans where it is still difficult to fathom what in the heck the boys were really hoping to do with this half-baked idea. They pleaded guilty to misdemeanors with O’Keefe getting the ringleader’s reward of more time and fines. All of them got community service hours and fines ranging from $1500 on down.

Hardly stiff sentences but given that they were caught before they could do any serious damage, maybe enough is enough. Personally, I don’t begrudge them getting a pity pass from the judge. They are youngsters trying to sort out the wild and wonderful world. All of this would be fine, if I could pretend they are likely to learn something from this escapade other than not to mess with U.S. Senators, and that’s where I think we’re going to be disappointed.

The arrogant, self-righteousness of this guy is almost off the scale. Once again yesterday he kept repeating his self-serving chant about “truth,” which is pretty offense given his tactics and the slimy way he handles both film editing (even the always in denial New York Times finally referred to the “ACORN tapes” today as “heavily edited”) and casual disregard of the truth about his “pimp costume” if it got in the way with his marketing and promotion. I won’t bother to dwell on his myopic inability to understand that there are consequences to any of actions.

So, we’ll settle with the fact that he is guilty as charged with the record to prove it, even while we regret that it appears he will learn little or nothing from the experience and will keep yelling truth even though he wouldn’t know what that looks like if it slapped him in the face harder than this light tap on the hand.