New Orleans     This is a story that needs to be retold of a working class neighborhood in Hermitage, Tennessee, who stood up for one of their own, even if he and his son were undocumented immigrants.  Margaret Renkl, a contributing writer for the New York Times, wrote the story of what happened when, 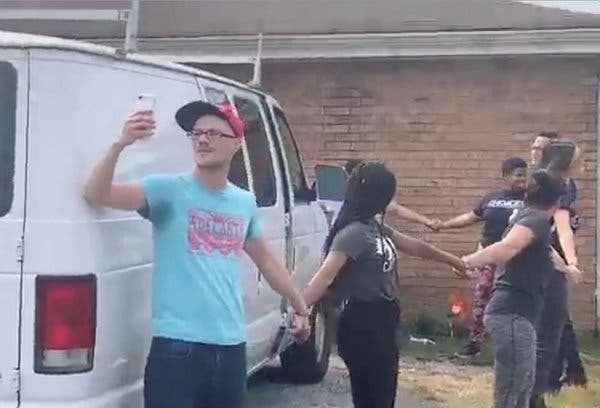 ICE Came to Take Their Neighbor. They Said No.

NASHVILLE — Residents of a quiet working-class neighborhood in the Hermitage section of Nashville woke up very early on July 22 to find officials from Immigration and Customs Enforcement trying to arrest one of their own.

An unmarked pickup truck with flashing red and blue lights had pulled into the man’s driveway, blocking his van. Two ICE agents armed with an administrative warrant ordered the man and his 12-year-old son to step out of their vehicle. The man, who had lived in the neighborhood for some 14 years, did exactly what the Tennessee Immigrant Refugee and Rights Coalition urges immigrants to do in such cases: He stayed put.

An administrative warrant gives officials permission to detain a suspect but it does not allow them to enter his house or vehicle. The ICE officials in that Nashville driveway were apparently counting on the man not to know that. With an administrative warrant, “there’s no judicial review, no magistrate review, no probable cause,” Daniel Ayoade Yoon, a lawyer later summoned to the house by immigration activists, told The Nashville Scene. He told WTVF, “They were saying, ‘If you don’t come out, we’re going to arrest you, we’re going to arrest your 12-year-old son.’” The administrative warrant they held did not give them the authority to do either.

Neighbors witnessing the standoff were appalled. “We was like, ‘Oh my God, are you serious?’” Angela Glass told WPLN. “And that’s when everybody got mad and was like, ‘They don’t do nothing, they don’t bother nobody, you haven’t got no complaints from them. Police have never been called over there. All they do is work and take care of their family and take care of the community.’”

Another neighbor, Stacey Farley, told Newsweek, “The family don’t bother nobody, they work every day, they come home, the kids jump on their trampoline. It’s just a community.”

More neighbors joined the scene and urged the man and his son not to listen to the agents. As temperatures rose in the hot Tennessee sun, they brought water and food and cool rags. They refilled the van’s gas tank so the man could keep his air-conditioner running. “We stuck together like neighbors are supposed to do,” Felishadae Young told WZTV.

ICE officials summoned the Nashville police for backup, but the officers who arrived stood nearby but did not intervene. State law prohibits any Tennessee community from designating itself a sanctuary city, but the police here don’t get involved in civil immigration cases. “We’re not here to enforce any federal script,” Sgt. Noah Smith told The Tennessean. “We’re just here if anything major happens.”

More than four hours later, ICE agents finally abandoned their efforts and drove away, though everyone on the scene expected them to return. Neighbors and activists linked arms to form a human chain from the van to the door of the house. The man and his son dashed inside. A woman came to the door and in Spanish tearfully thanked bystanders for their help. Shortly thereafter, the family fled.

Small as this story might appear to be when balanced against the great travesty of American immigration policy today, it nevertheless gives us hope. It is the story of David and Goliath, of Hansel and Gretel, of Robin Hood. It is the story of weakness defeating strength. It reminds us, in this cynical age, of what is still good in us, of what we are yet capable of, even against great odds.

So we salute the heroes of Hermitage — the ordinary people who, like the rest of us, are absorbed by their own worries, contending with their own troubles, but who nevertheless turned from their own lives to protect their neighbor, to shield him from the lies and tricks of the very government that was formed to protect his rights. We celebrate their courage in the face of unwarranted authority, and we take heart from their commitment to justice. We replay the video again and again to watch them link arms, to watch them calling out words of comfort and encouragement. We remember a truth that has lately been too easy to forget: We belong to one another.