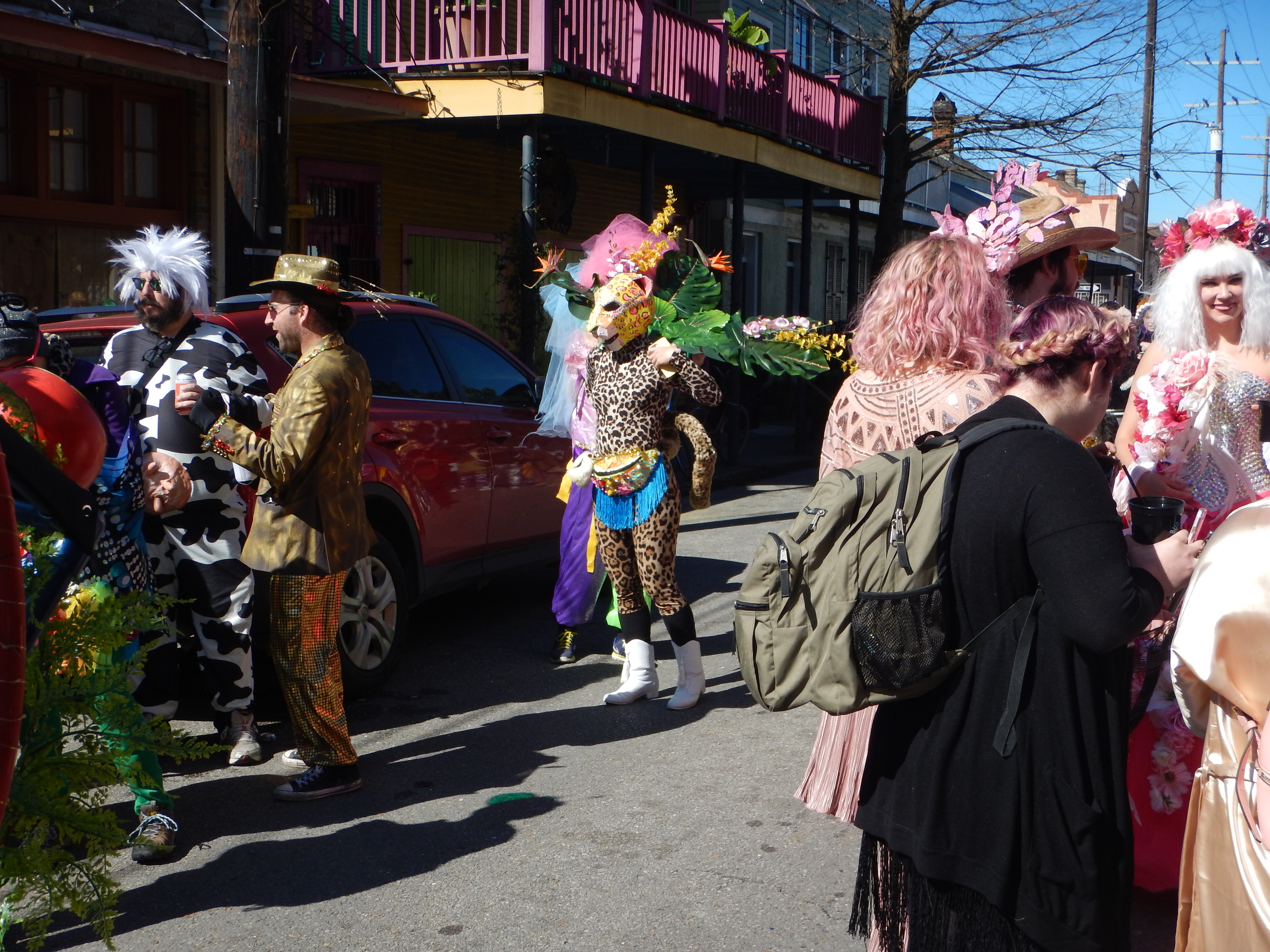 New Orleans       The song goes, “have you ever been to Mardi Gras,” and I can honestly say, “been there, done that!”  I’m somewhere between Carnival-skeptic and agnostic.

Historically, the city can’t live with it and can’t live without it.  There’s almost nothing about its mainline history that isn’t abhorrent and reeking of noblesse oblige, Uptown airs, private clubs, racism, rich dads and debutante daughters.  Throughout my youth, it was class and race division on display in the streets of the city.  If you had any politics at all, you couldn’t miss the message from power to the rest of us people, even if it was a day off of school, fun to watch, and easy to get caught up in the bead count.  At the same time, with a million or more tourists in our broke-ass city, it’s a big payday for service workers, small businesses, and others who need all the help we can get, so we “go along to get along,” as former Speaker Sam Rayburn counseled. 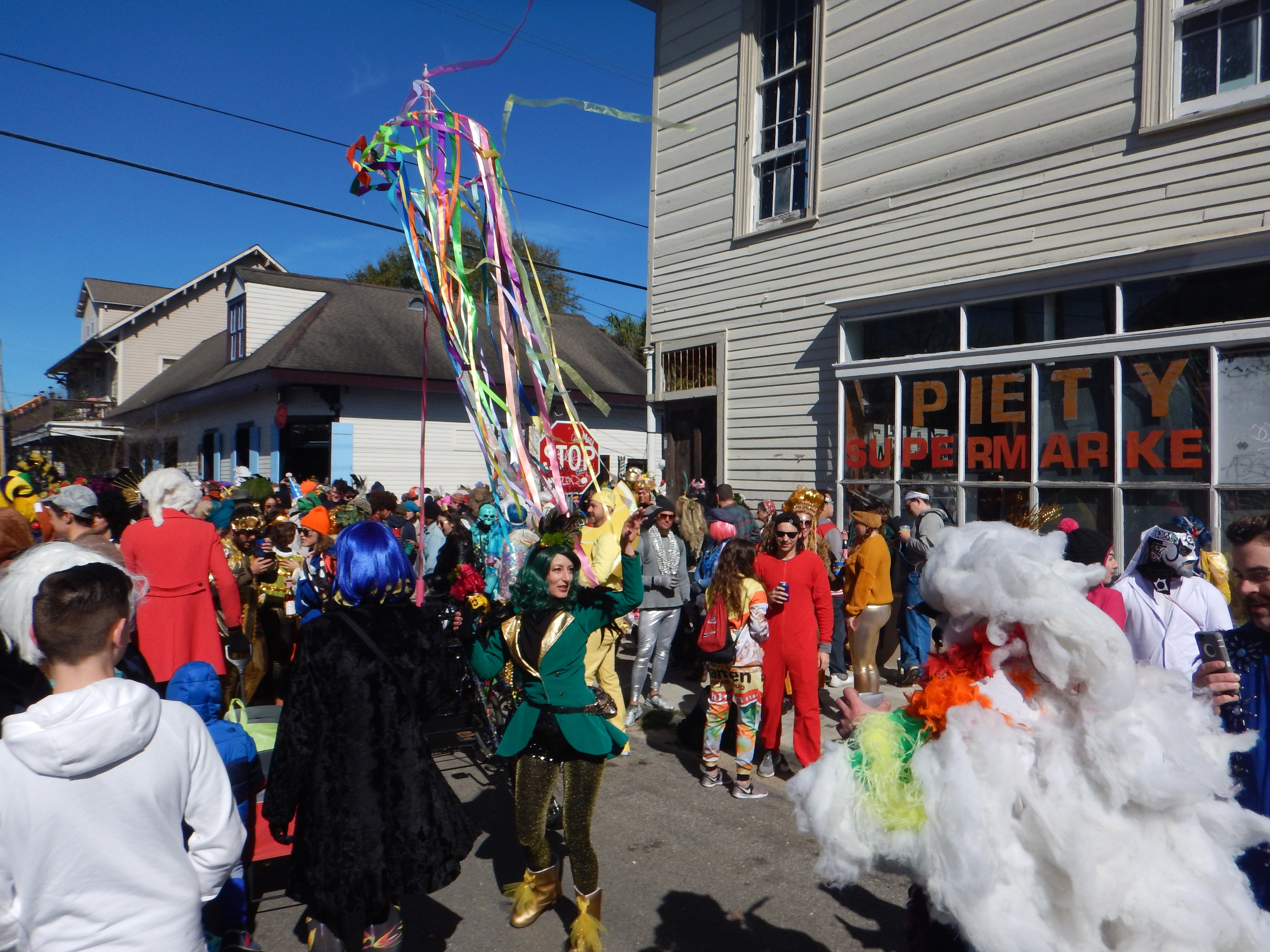 Eos choir for the Krewe of Aris

So, I make no special effort to stay in town and often have been on the road here and abroad, but this year saw me back home to witness the passing parade.  There’s a push for a bit more diversity.  The Indians are prominent in many neighborhoods within the African-American communities.  There are now LGBT balls and events as the gay community embraces Mardi Gras irrepressibly.

It also feels like younger New Orleanians and newer residents, especially in my Bywater neighborhood are increasingly making Mardi Gras more local and more their own, and that’s a good thing to see.  Costumes are back and they are serious, serious business. 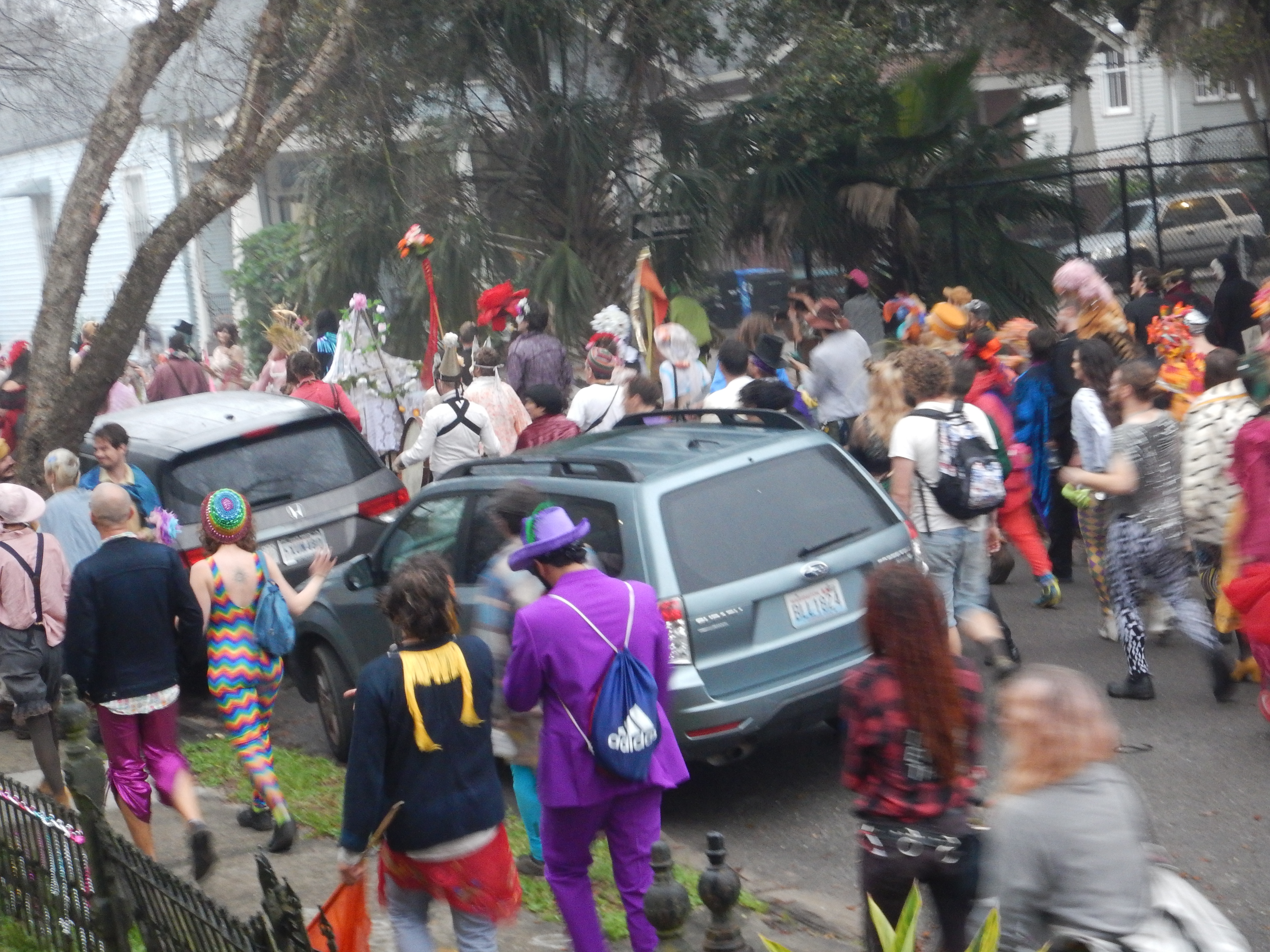 The other morning, still jetlagged, and returning from walking Lucha, I heard drums coming up my street through the early Saturday morning fog.  It was actually exciting, even if it was driving my Australian Shepherd crazy for a bit.  Hundreds of people were out before dawn and engulfing the street and sidewalks as they moved along, almost all in costumes and swaying to the beat.  It turned out to be the Eos Choir of the Krewe of Aris, and I may be spelling all of that wrong!  Wonderful spirit and participation. 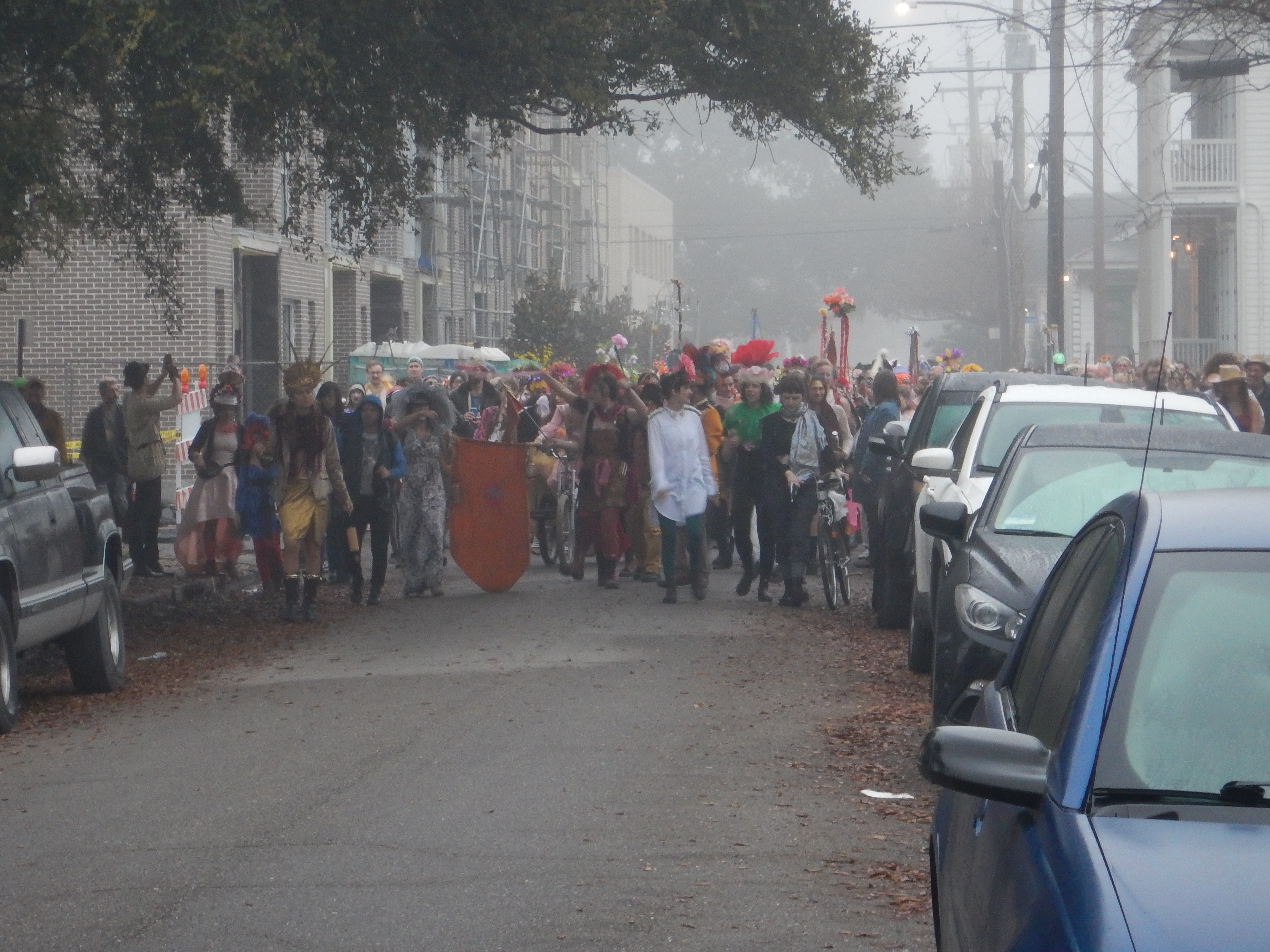 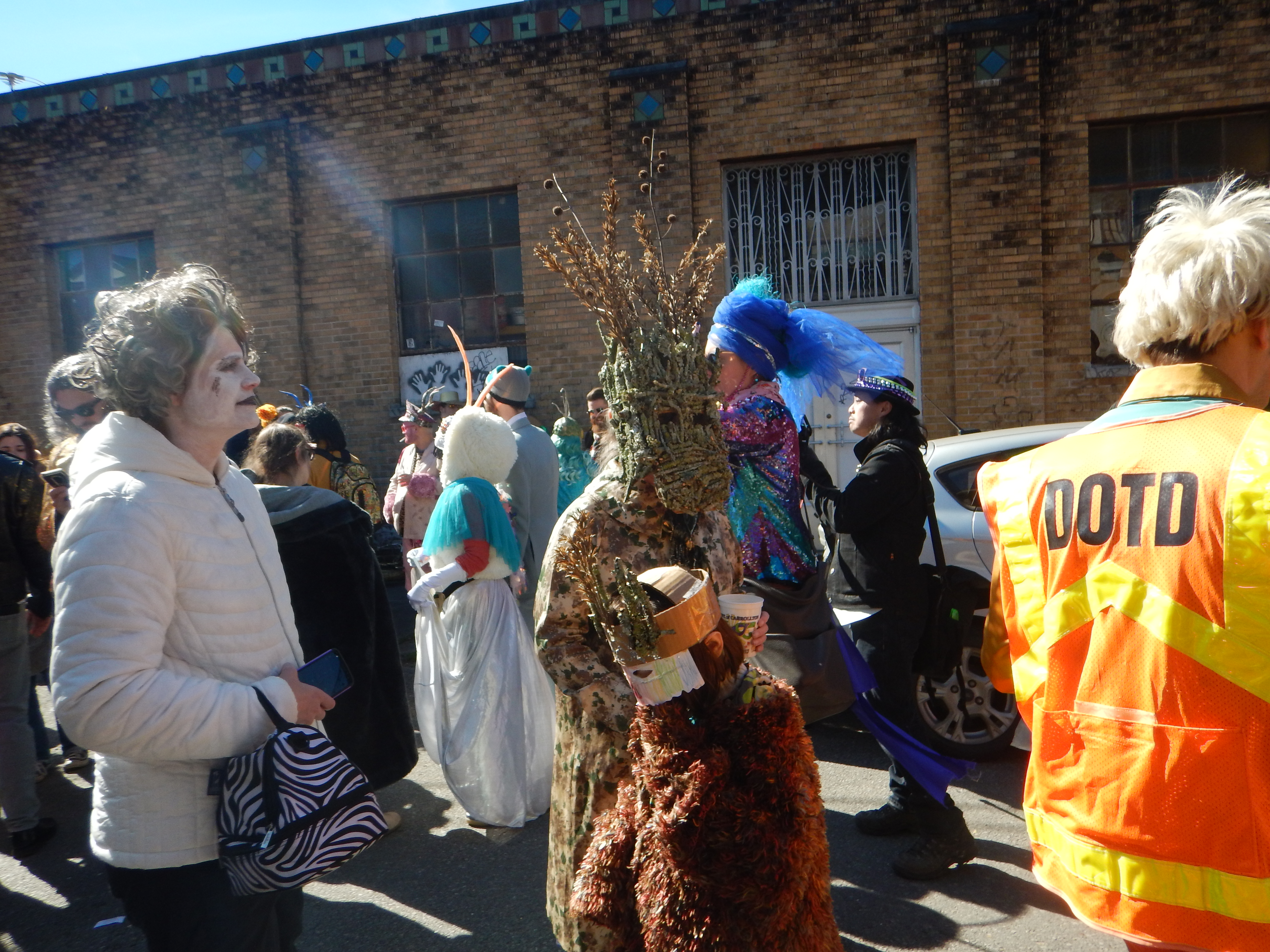 Mardi Gras morning before 9am there were already hordes of folks, largely younger, some with baby buggies and strollers, all decked out and masking the whole way as they moved en masse to join the St. Ann Parade.  There was all manner of multi-colored costumes with feathers and sequences galore.  Some were even political.  I saw a tiny Trump on his wall.  A woman was walking perilously through the crowd with wire fencing encircling her and a sign saying, “Donde es mi mama?” or “Where is my mother?”  Beat that, if you can! 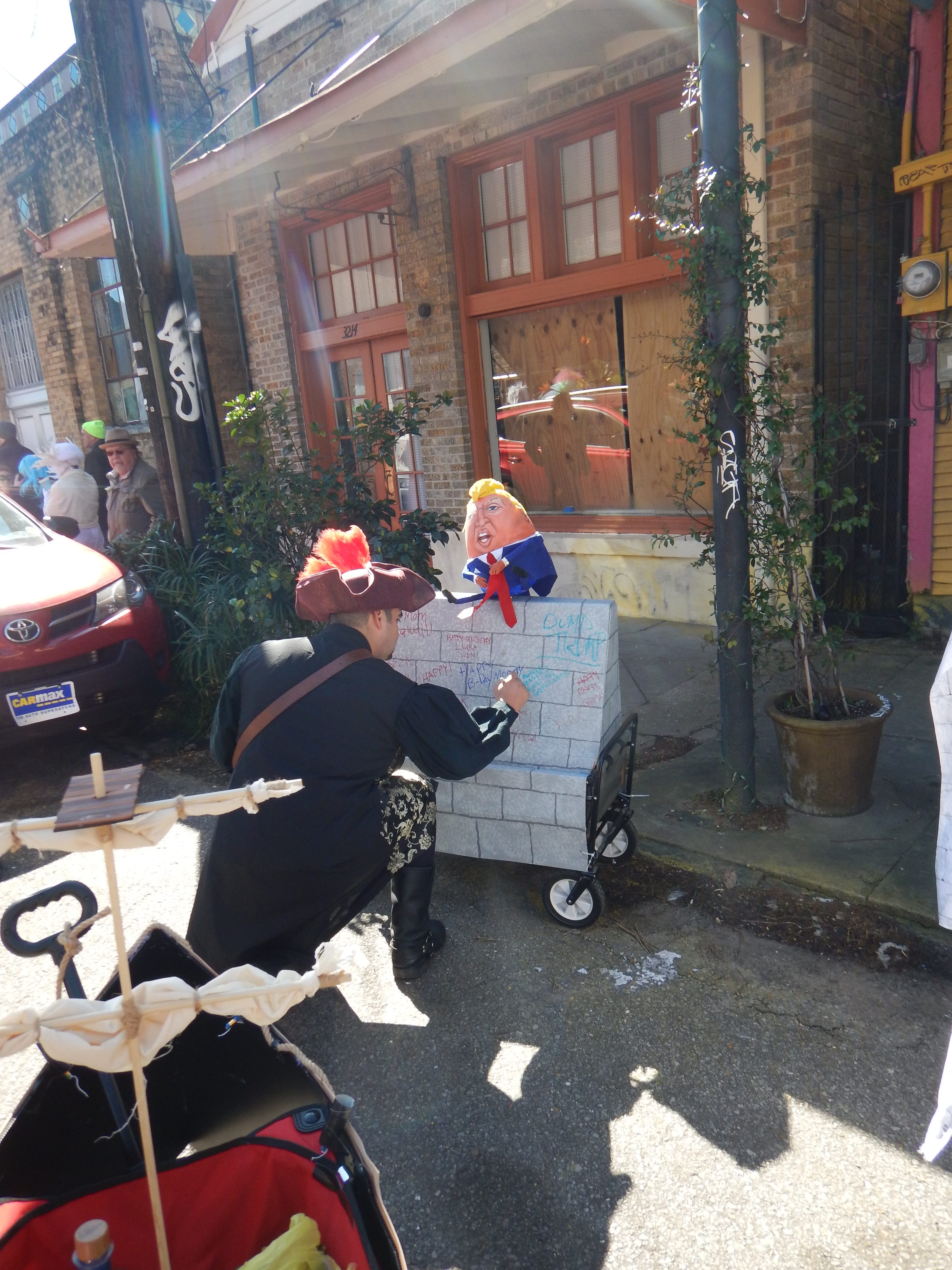 trump on the wall 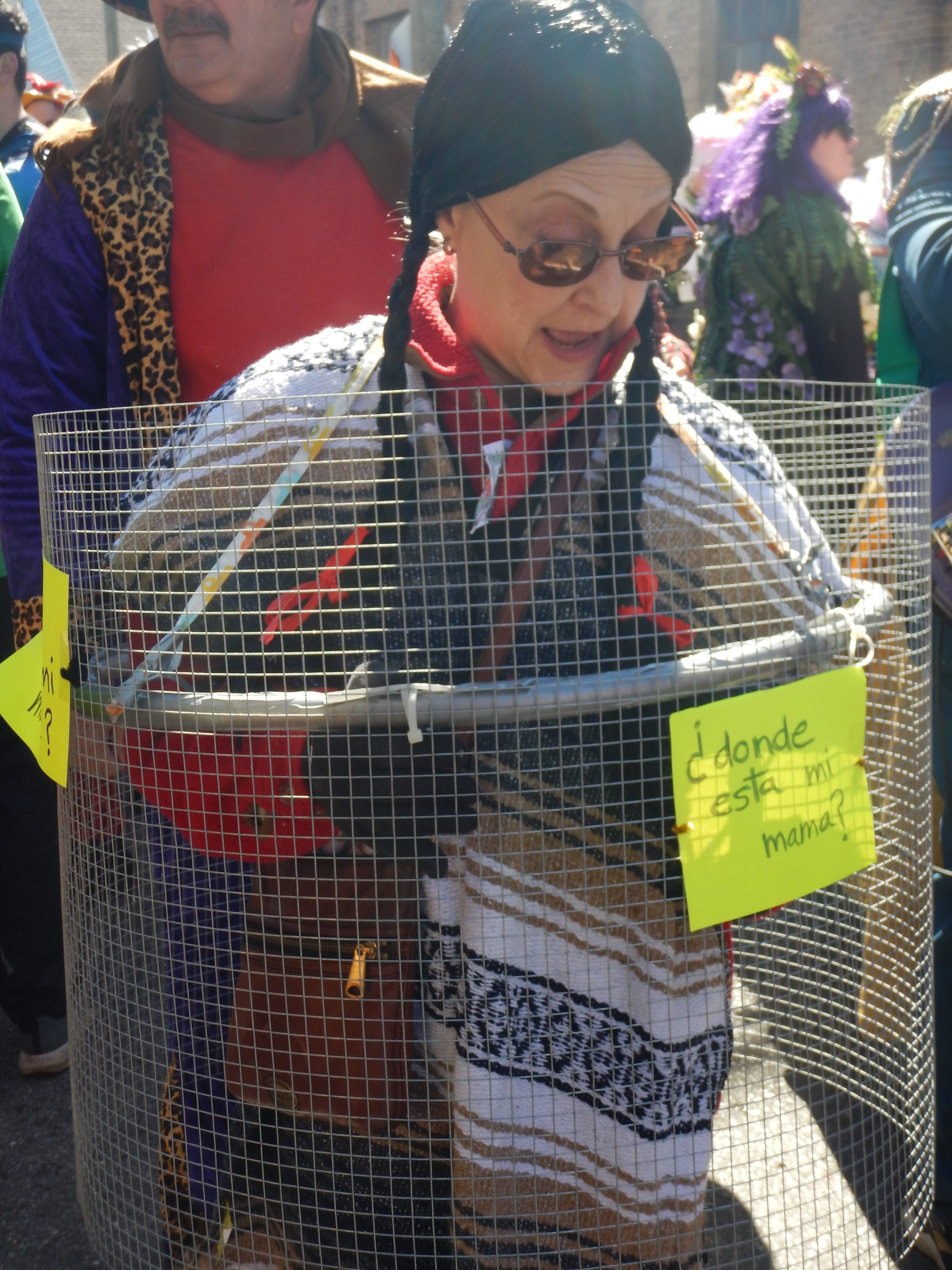 border refugee behind the wall

Maybe there’s a deeper political message underlying all of Mardi Gras now as well?  This year there will be 31 Mardi Gras krewes rolling in New Orleans with 27,727 riders in all.  In the metropolitan area there are estimates of 53 parades with 1061 floats, 581 marching bands and 135,000 participants.  Whether it’s the truck parades of my youth or the giant new krewes enlisting anyone with a couple of thousand like Endymion and Bacchus, the Mardi Gras of Rex and Comus with its history seeped in wealth, class, and privilege, may be the exception now.  The people may have finally taken over and claimed Mardi Gras as their own in their neighborhoods and communities, and that’s a good thing, and maybe should be a warning to any and all that when we’re marching, we’re unstoppable. 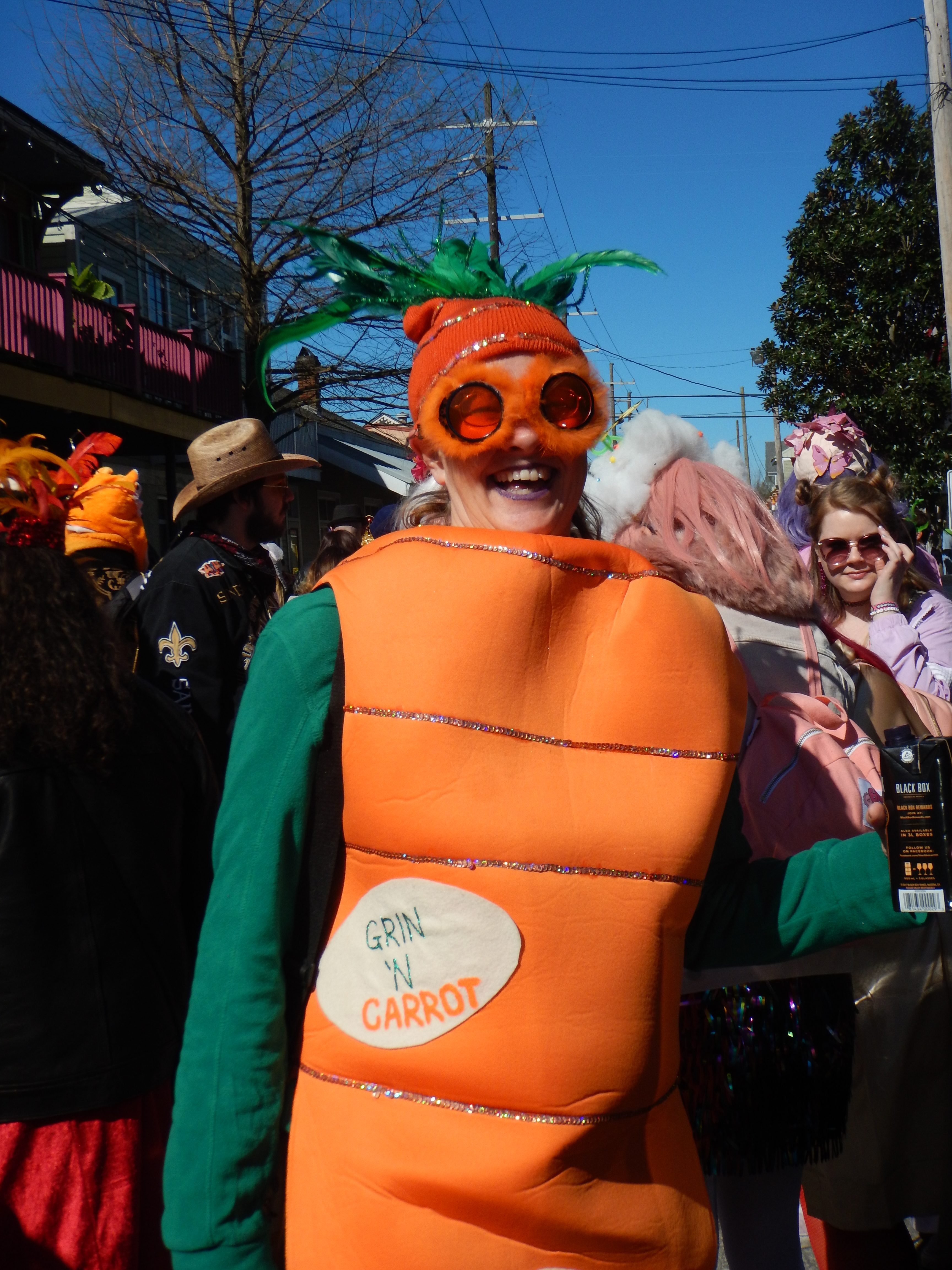 Please enjoy Pistol Annie’s Best Years of My Life. Thanks to KABF. New Orleans   It’s Mardi Gras in New Orleans. I helped my son open up at Fair Grinds Coffeehouse for the regulars. Once or twice a year it’s “training day” all over for me. I’m help, just not great help, but I don’t mind getting bossed around. It’s fun to see everyone, wish them well. After decades, Mardi Gras is a chance for me to come off the road and get a day off for me and take a Trump relief break.

Alexa is playing alternative country and that’s a nice break as well. We’ve had some problems in country music recently. I’ve loved it for years, but almost had to swear off last year. It had become boring and ridiculous. Last year there was a song that said it all, as someone whose name I didn’t catch sang, “It’s hard to be a woman in a country and western song.” She mourned the fact that it all seemed about going after a girl and driving her to the lake or river in a big pickup truck.

But, maybe times are changing? I heard a song about how the trick of driving across the border was to put a Bible on your dash. A real sign of potential change though for women, and we can hope for their men as well, is a recent release by the group, Little Big Town, called “Better Man” where the refrain continues to “wish you were a better man.” No standing by. No taking the blame. None of what my companera calls “whining women singing.” It’s mournful about losing the man, but it’s clear it simply came down to the fact he just plain wasn’t a better man. That’s a standard we have to be ready to step up and be judged by.

I know I’m probably better off on my own
Than lovin’ a man who didn’t know
What he had when he had it
And I see the permanent damage you did to me
Never again, I just wish I could forget when it was magic
I wish it wasn’t four am, standing in the mirror
Saying to myself, you know you had to do it I know
The bravest thing I ever did was run

I know I’m probably better off all alone
Than needing a man who could change his mind at any given minute
And it’s always on your terms
I’m hanging on every careless word
Hoping it might turn sweet again
Like it was in the beginning
But your jealousy, I can hear it now
You’re talking down to me like I’ll always be around
You push my love away like it’s some kind of loaded gun
Boy, you never thought I’d run

And, if those lyrics aren’t enough of a surprise, then here’s a big one: the song was written by Taylor Swift, who now styles herself a pop diva.

There’s some hope for all of us and a Happy Mardi Gras!