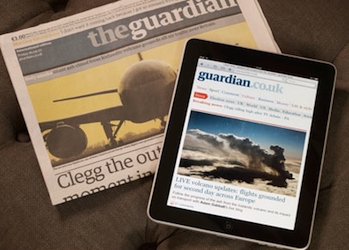 Little Rock    When you think of innovation, you might think of California and Silicon Valley, but you’re not likely to think, hey, Arkansas!  Well, who knows if this will work, but the statewide newspaper, the Arkansas Democrat-Gazette, has announced that, lo and behold, it is going 100% digital by next year, yes, 2020!  You want to read the paper, well, sure, says Walter E. Hussman, the publisher, we can do that, but it’s not going to be a paper, you know, like on real newsprint paper kinda deal, it’s all going to be on an iPad.  Yep, an iPad.

In a mid-May letter to subscribers, Hussman lengthily described his thinking which, front to back, can easily be boiled down to his reveal early in the missive:  they lost money for the first time in 2018!  They didn’t like it, and they could see it getting worse, and that’s not how they saw their business.  Their business sold news for money, and if it was not making money, then that was very bad business.  He detailed an experiment that they had tried in Bentonville, where they had 200 subscribers who were expensive to service.  They gave them all iPads.  They had sessions in the local Holiday Inn to train them on how to use the iPads.  Those that didn’t show up, got home visits and personal tutorials about how to make this work, keep them juiced, and learn to read with their fingers doing the walking.  70% liked it and kept their subscriptions, and that was good enough for Hussman.  On to El Dorado and beyond.

Reading the letter, it looked like their strategy was to encircle the fortress of their subscribers in Little Rock and Central Arkansas by lopping off all the pockets of fans they had here and there.  Hussman’s letter claims this cuts costs drastically, more than offsetting the expense of providing the iPads and will return them to profitability.  The point of the letter, now that he has made the whole deal public in what was left of his paper, was to ask subscribers to pay the same, they were paying – which is a crucial part of his business plan — and get in touch with them so they can iPad them up as well and bring all of Arkansas news readers into Apple-valley.

Will this work?  I’m not sure.  In New Orleans, the Times-Picayune just gave up the ghost after a failed experiment of moving to three days per week and were acquired by The Advocate that came into town and continued to deliver seven days a week.  I failed on their website or on Google to find out the cost for a full-year’s subscription, but if Walmart will let you buy an iPad for $250, I assume Hussman was able to make a deal for less than $200 and assumes by reducing costs of production and delivery, that he will still make money on a one-year subscription.  A local businesswoman told me that Hussman has said that this is costing them $12 million to make the changeover.  Not sure what happens when the iPad dies, and whether he will replace them or not?  For those willing to read on an iPad, why would they not just pay for the paper digitally as opposed to paying full boat for the paper on an iPad with a print Sunday edition?

I’m fighting hard to keep an open mind, since I have spent some years working in Arkansas, and am still scarred by the antics of the Democrat and the Hussman family during their wars with the Gazette and its questionable ownership.  Maybe he’s right that people will like an iPad better than a paper.  That’s never been my experience, and reading papers digitally as well as by hand, I know for a certainty that I miss some articles online, that I find in print.  Maybe an iPad is different and more of a facsimile.  The only thing that I’m sure of right now after reading Hussman’s letter is that he is right about one thing for sure:  for him, it’s about the money, not the news.  It might work out for the business, but we’ll have to see how it works out for the rest of us. New Orleans       I get up early.  That’s the way it’s always been.  Today is one of the three days a week that the more than 175 year old Times-Picayune is actually delivered to our home.  The once daily Times-Pic is also a sometimes delivery paper.  At 430 am, I found it properly positioned on the steps of my porch.  That makes 3 of 6 times that I’ve actually received the paper over the last two weeks.  At 7 am, now fully light, I was able to find the New Orleans Advocate, a recent competitor that is now delivered daily, but haphazardly.  I’ve talked to my paper man.  We know each other.  Sometimes he drops the paper as early as 330 am.  He drives up the wrong side of our one way street with the rap music at full volume keeping the beat.  I can often hear the paper’s thump, but finding it is hide-and-seek, since as large as the porch is, stretching across the house, like a heat seeking missile, he throws the paper in the sego palm or its neighborhood.  I sometimes find the paper weeks later.  You don’t need to wonder why I get the New York Times and Wall Street Journal faithfully on my steps every morning and with a honk calling me to a hello every Sunday about 730 am.  Welcome to what the local press and some media critics call the New Orleans newspaper war.

In the way that those of us living in post-Katrina New Orleans have become the lab rats for one social, commercial, and public policy experiment after another, for more than two years we have been the largest city where the dominant news daily is now trying to build a newsprint bridge to what they see as the web world future.  As you can see, the change hasn’t been easy for those of us on the receiving end of the war.  Essentially, we’re collateral damage.  The war also seems one of those “pen is mightier than the sword” things declared as the first body counts of experienced and recognizable newspaper reporters were laid off, decamped, or jumped to the Advocate which soon became a competing paper.

Unfortunately, being a faithful reader of both papers, as often as they will allow me to receive the papers I pay for, I’m afraid it’s really not much of a war.   The Picayune has pretty much won hands down.  They are just inarguably a better paper than the Advocate when it comes to New Orleans and what matters here.  John Georges, a Louisiana big bucks did a good thing buying the Baton Rouge Advocate and going after the New Orleans market, but I suspect he has talked to too many of the swells at Galatoire’s, a local elite restaurant favorite in the French Quarter, and thought that buying some of the names from the Picayune would translate into readers and, more importantly to make the war real, advertisers.  The columnists are better at the Advocate in some cases, but overall they can’t keep up.  Meanwhile the Picayune is going forward by strategically retreating.  In the most recent Sunday paper, they announced that starting right after Labor Day they will add two more days of daily deliver on Saturdays and Mondays to accommodate sports crazed fans of the LSU Tigers, Tulane Greenies, and of course the NFL’s Saints, our pride and joy.

Reading Rebecca Theim’s Hell and High Water:  The Battle to Save the Daily New Orleans Times-Picayune, in order to understand the whole mess better, shed some light for me, but raised questions she might not have intended.  The owners of the Times-Pic for the last 50 years have been the Newhouse family, most recently through the corporate vehicle Advance Publications.  There was a “no layoff” pledge that they had rescinded in the years before this change which should have been a warning signal.  More tellingly, she devotes a chapter to their so-called “Michigan Model” where they had moved a number of papers in that state to occasional printing, wholesale web editions.  Others were trying similar experiments.  California was also a hotspot.  Circulation and profits were falling for newsprint papers everywhere.  In Theim’s version the local press corp and even the Newhouse gang were heroes during Katrina, but a shrunken city with reduced jobs and population must have moved the paper to the top of their list, and Theim avoids the obvious question:  why didn’t they all see this coming?  Why didn’t they protect themselves?  I got one inquiry during the mess from a reporter, gone to fairer weather years before, asking if we would be willing to help them organize a union, but nothing came of it.  Why would so many both walk the plank, and then complain about the water temperature?  I don’t get it.

Meanwhile we now have two substandard papers and a couple of crummy websites.  It may be easy to say that after two years the Times-Picayune is winning this little skirmish in the New Orleans market, but there’s not much doubt that both the community and those of us still reading the papers, are still the big losers.