Cape Town Earlier in the Organizers’ Forum visit in South Africa we had started in a church in Orange Farm outside of Johannesburg that was ministered by one of the national leaders South Africa’s CBCO — Church Based Community Organizations.  Now in Cape Town we met one the Cape Town lead organizer, Deborah , and some of the leaders of the organization to get a closer look at the work.

Rev. Terrance Jacobs, the South African Director of CBCO, had been a member of our delegation throughout the trip.  CBCO is a sister organization to the Gameliel Foundation based in Chicago and directed by Greg Galuzzo.  The work among churches began in the Durban area where Terrance is headquartered, but had spread to Orange Farm, Cape Town, and other locations.   The heart of the support seemed to come from Anglican (Episcopal in the USA) and Catholic Churches largely.

Deborah gave us a briefing in an interesting location — the Crypt — a coffee house & cafe in the bowels of an old Anglican Church right near Government Road, a walkway up the hill in the center of the city alongside the gorgeous Dutch East India Company gardens, the statue to Cecil Rhodes, museums, and the president’s house.  As she spoke one could not help reading the inscriptions on the crypts memorializing various English officers and soldiers who had died in the great Boer Wars.  The Boer Wars pitted England against the Afrikaners in their drive for independence from the Commonwealth.  There are huge monuments to the Boer Wars in park behind the Parliament in Toronto and in the downtown central square of Montreal.  This was a war the English cared about deeply.  I doubt if the Boer Wars make much of a mention anymore in US history books, though one suspects its still fresh in the histories of the English and their colonies.  We were buried in old history where the weight of reactionary forces made it hard to know how to choose sides.

Crime had been the big campaign in Cape Town.  The twenty or so churches who had pieced together the organization had recently held a meeting of thousands with this as the main plank in their platform.

We were able to attend a leadership meeting of the organization one evening while in Cape Town.  The priests and ministers speaking to the results of that assembly were still in awe of their turnout.  They told a story that resonates throughout community organizing about trying to pin down the target for the action.  The priest excitedly told the story of the Mayor giving them the slip and sending a second in command to deal with them, and of overhearing the flunkey calling on the cell to the Mayor and telling him he better get there, because it was churches and there was a “huge crowd.”  They felt the power.  They described the Mayor’s promise as tepid and lame, and it was hard to follow in our brief visit if there was a more aggressive or progressive program and strategy at work here, or whether this was simply middle class parishioners in suburban churches working with their ministers to express their fear and frustration about crime and related issues.  Among the thirty odd leaders there was one white woman and one black man and in the terms of apartheid, which are still the cultural and political constant even a decade later, the rest of the leadership was “coloured” as they were self-described.

The leaders were gracious and friendly, surprising us with a potluck.  We were meeting in a Methodist Church, so I repeated the common theological line for all Methodists in the USA that the one thing that was eternally certain was the belief in the potluck.

The model seemed to have been a carbon copy of what one would have seen in a church based organization in the Gameliel network in the United States.  As we could easily see in both Jo-burg and now in Cape Town, Gameliel had obviously found fertile soil in building their kind of organization among the welcoming churches of South Africa. 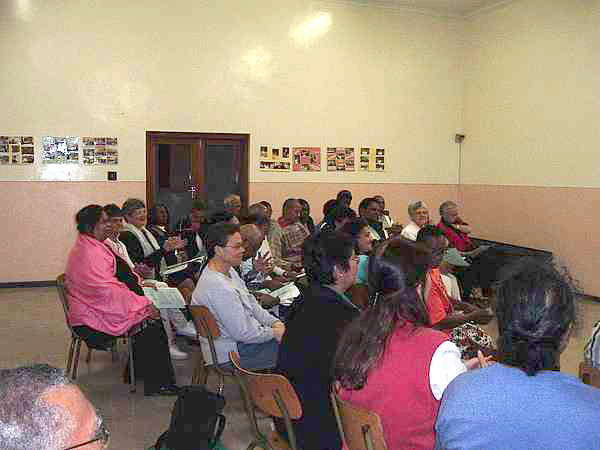