San Diego: I was meeting with Sol Price.  Price is a legendary retailer who founded Fed Mart and Price Clubs, which became the model for Wal-Mart’s Sam’s Club, and the backbone of much of Costco when he sold them Price Clubs.  He also turned out to be a just plain decent man who made the money and now is making a difference in other ways.  Through Price Charities he has been trying to prime the pump for social changes in City Heights, where he was raised, by creating showcase developments and model social experiments of various types.

Sol is 88 years old and has a reputation, no doubt totally deserved, of being a difficult guy for many folks to handle and something of a crank tolerating no fools and little else.  In the waiting room I read a binder of press clippings including one where he kicked some charity fundraiser out of his office telling her to “get off of her ego trip!”

Needless to say, we got along famously!

At the end of our conversation Sol asked me some personal questions about work and family.  I turned with him to look out of his large picture window at the expanse of La Jolla Cove.  La Jolla is a suburb on the Pacific Coast a little north of San Diego and one of the wealthiest communities in the United States.  The cove is the gorgeous backdrop and attractor for all of this wealth and well-being.  The rocks roll up from the waves and scores of pelicans and cormorants rest out of the wind before soaring along the water feeding and flying to the next destination.

Looking at the cove, I told Sol the story of the only time I had ever been in La Jolla Cove almost exactly thirty-six (36) years before when I was barely 20 years old in 1968.  I was telling him, ironically, on the very eve of my youngest child, Dine’s, 20th birthday.  I had dropped out of school at 20 and gone back to New Orleans, and had tried my hand at organizing in that first instance against the war in those early days before Viet Nam became universally recognized as the tragic disaster it was.  Things had been tough, and I had found the going hard to build something real.  I had done this and that.  Driven a lift truck and worked the shipping docks at Luzianne Coffee Company for a check, managed a semi-skilled rock band, and somehow gotten married 5 days after my 20th birthday to a lovely girl that I had barely known in high school.

We had said “Enough!” in New Orleans, and I had traded my old motorcycle for an old Ford Econoline panel truck big enough to hold all of our stuff, which wasn’t much, and use as a “camper” with a double sleeping bag stretched the length of the truck bed.  One night along the way we had stayed with an uncle and aunt in Memphis.  The next night we had pulled into Tulsa and stayed with another of my uncles and his family, and watched the election returns as Nixon destroyed Humphrey.  The worst election nights are some of the short ones!

From Oklahoma we had driven for days along the southern route of I-10 with a top speed of 50 mph, camping in the van along the way, and dealing with one problem after another, until we finally made it to the coast.  Looking for a place to camp in San Diego turned out to be impossible.  We kept driving up Highway 1/101 until we came to La Jolla Cove.  It was beautiful!  It was dark.  We had no idea where we were or what might be around us, but we found a parking place and squeezed the truck in overlooking the cove and called it home for that night.

At dawn the next morning we woke to an uproar of banging on the side of the truck.  I crawled out to find two of the local police brandishing nightsticks and thumping on the panels.  They rousted me quickly and took me immediately for the troublemaker I had been in the past and would become again in the future, but frankly had not intended to be that night overlooking La Jolla Cove.  After the usual threats of arrest and mayhem, they agreed to let us go, if in fact we made tracks and saw the last of La Jolla.

That brief space of time was my last time not working and not organizing.  36 years in the work putting one day after the other until there I was again in La Jolla at the Cove.  Looking from the 6th floor of a well appointed building down to the cove, rather than from along side of the curb.  Now I was standing next to Sol, rather than a couple of the local constabulary.

Different, but the same.  I kept moving.  I did not stay another night.  Then or now.  Some places really are not for me and that’s important to find out and not forget whether young or old. 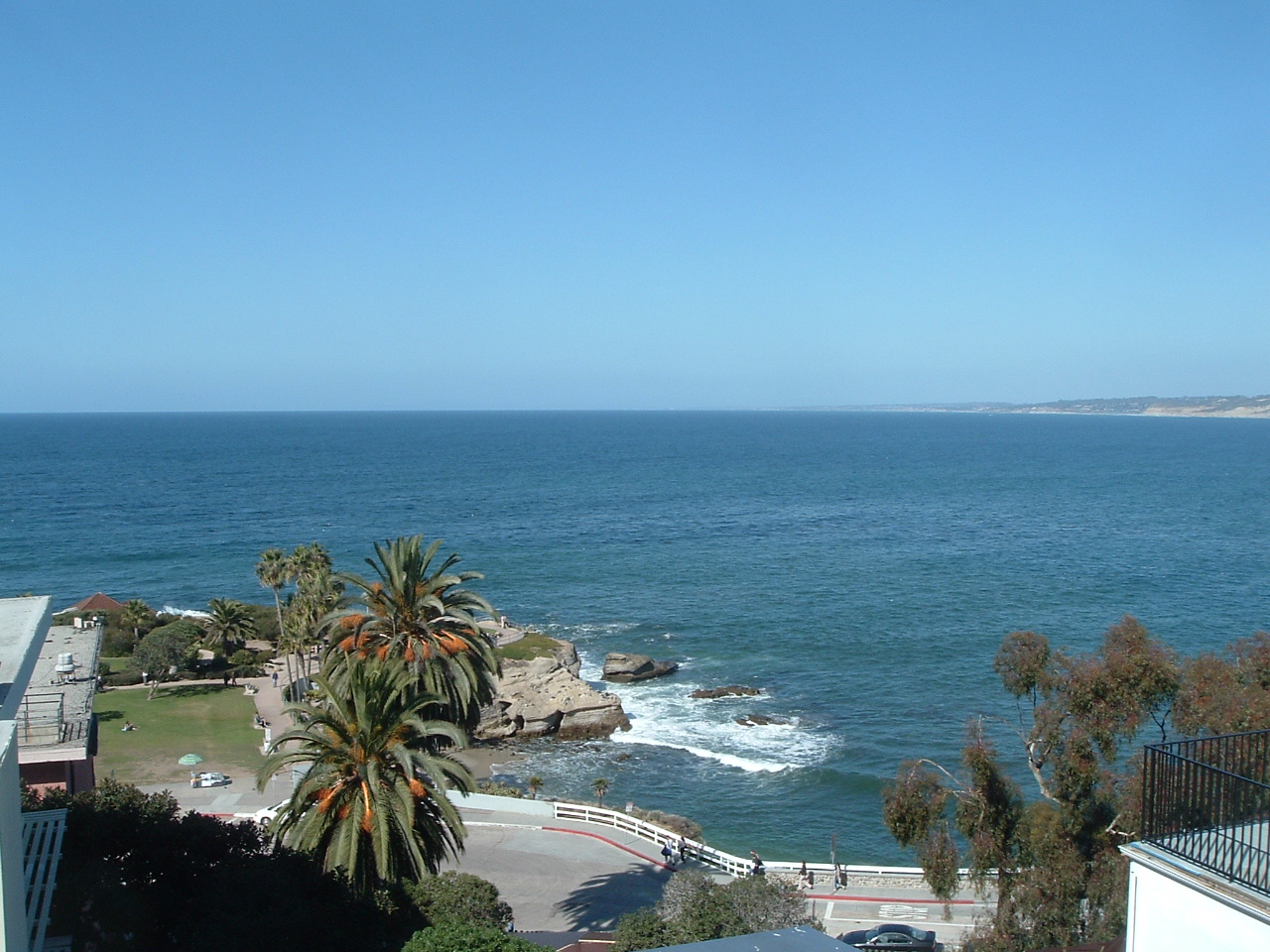 The wide expanse of La Jolla Cove and a closer look at the pelicans perch on the rocks of the Cove. 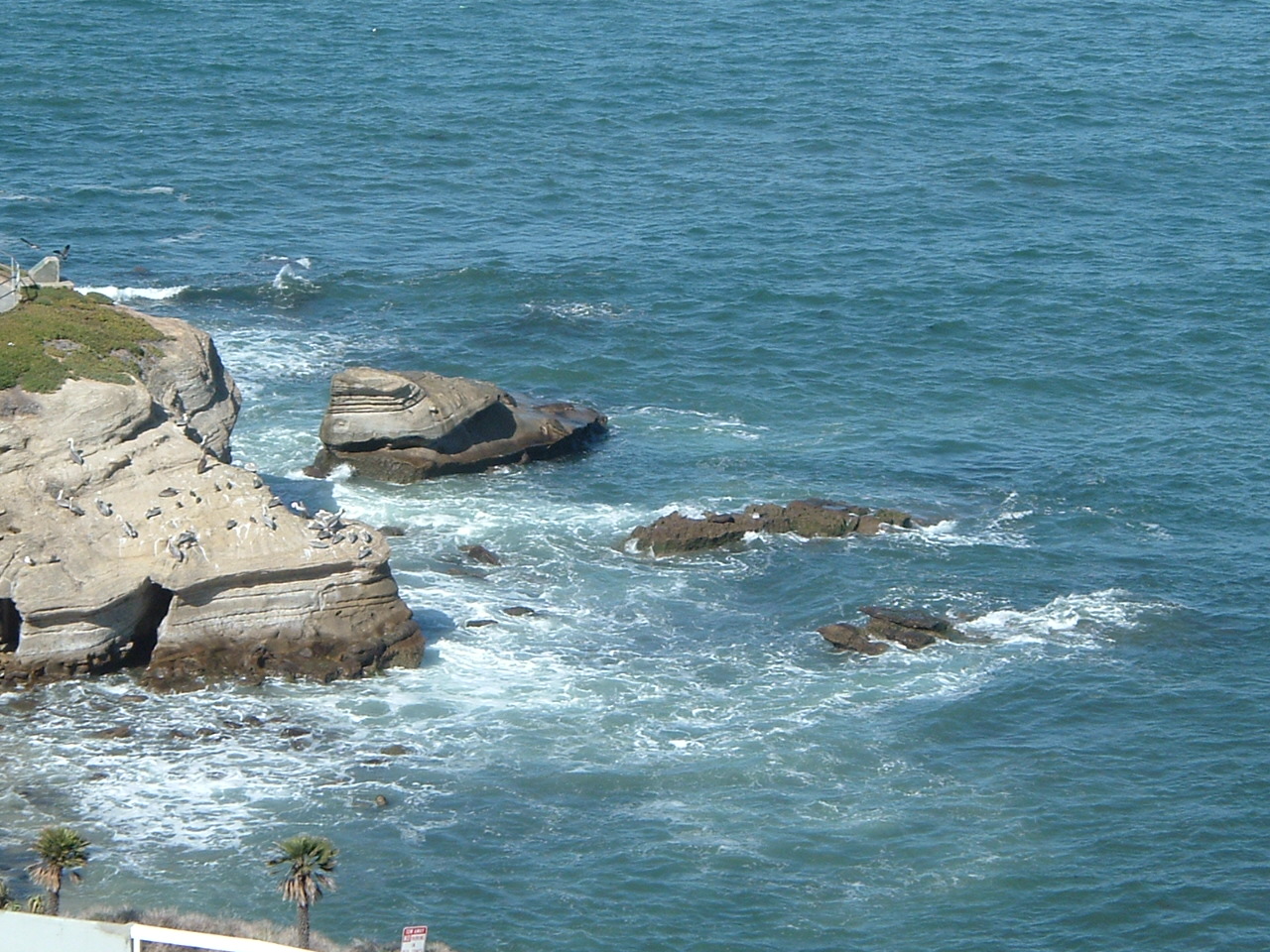