Miami:  I was in Florida for election night for a lot of reasons – more than 300,000 reasons, perhaps more than 500,000 reasons, and many believe 700,000 very good reasons – and none of them had to do with George W. Bush or John Kerry.  I wanted to be with ACORN leaders, members, and hundreds and hundreds of Election Day workers who had been getting the vote out for Amendment #5.

This had been a Herculean effort, and more than once we wondered if we had bitten off way more than we chew.  Over a year ago we had set out sights on whether or not we could get the signatures on initiative petitions to put before the Florida voters the question of whether or not to raise the minimum wage in the state.

Would this make a difference for working people and their communities in Florida?  You bet!

Statistically, there was a lot of posturing about how many people would really benefit.  That is what makes it so hard to definitely – and personally – know all of the good reasons behind this Amendment.  I love to read these arguments!

At one level ACORN tried to tamp down some of the wilder estimates.  Some argued that there were less than 35,000 workers in the state who were actually making less than $6.15 per hour now.  As big as the workforce of Florida, one would have thought, “Well, what’s the big deal?”  The big deal turned out to be the simple fact that there are so many workers between $6.15 and let’s say $7.15 or $8.00 per hour.  The increase in the minimum wage would have a ripple effect because as the bottom goes up, all have to rise with it or the discontent gallops due to wage compression.  Are you still with me?  A nursing home worker making $6.50 maybe thinks that is a good wage, if the alternative is $5.15 per hour, but if the floor comes up to $6.15 and she is only making 35 cents above minimum wage, she’s ticked!  So business cries like stuck pigs, because they are no longer able to play the shell game with lower wage workers of trying to convince them that a pitiful wage is a decent wage compared to how low the minimum wage is.

Reliable estimates from economists (like Robert Pollen from the University of Massachusetts and others) indicate that the number of workers who are likely to get a raise directly because of the increase could be as high as 700,000 workers!  So, now we are talking.

The campaign had been bitter and hard fought.  The Florida Restaurant Association led by Outback Steakhouse, Chili’s, and Red Lobster among others had raised $1.5 million to try and beat our measure.  There was one ad that played on hurricane fear in Florida with a countdown of the 4 hurricanes and then the #5 devastation to hit Florida was going to be our own Amendment 5.

We won.  They lost.  The working families of Florida won and how.

The opposition claimed that our proposition was a matter of “people voting themselves a raise.”  Hardly!  We didn’t get just 700,000 votes; we got six times that many.

The truth is that working families vote in their self-interest when they have real choices, and Amendment 5 was a situation where the people of Florida overwhelming knew that this was the fair and right thing to make sure that workers had a chance of living on their wage, and that’s what the fight for living wages is all about.

There were hundreds of thousands of good reasons to be celebrating in Miami with ACORN and our allies whenever Amendment #5 hit the screen.  It is what we need to be all about for the future. 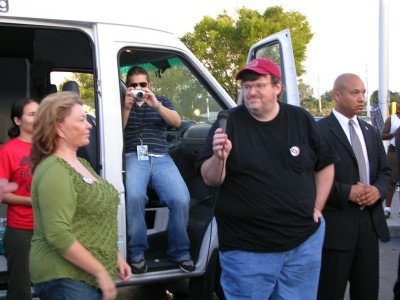