Manchester     This is a classic organizing problem, but also in some ways an equally ubiquitous problem in all of life’s endeavors.  In short, with fixed resources, including people, money, time, and distance, how does an organization respond to the increasing demand by people for organizing assistance and support?  Outside of work, we face the same challenges that despite a running as fast as our legs will carry us, there always seems to be too little time, too little money, and an endless list of things we want to do and even must do, that we have trouble balancing.  As Adrien Roux, head organizer of ACORN France, and Nick Ballard, head organizer of ACORN United Kingdom, sat with me over a marathon breakfast in Amsterdam, before running for ferries, trains, and planes, to the next stop, we debated how to address this issue in our work, even while laughing off our inability to deal with these issues in our personal lives.

The question has been especially urgent in England for ACORN.  As news of our work had spread in recent years, a model system had been devised to respond to tenants wanting to join our union and organize chapters in their cities.  When contacted, the Bristol office would have a chat and send out a “starter packet” that Ballard described as the “classic ACORN organizing model with modern social media added.”  When the incipient committee recruited a threshold of ten or twenty dues-paying members interested in moving forward, the office, usually meaning our senior organizer, Anny Crumble, would arrange a visit at an organizing meeting with nearby staff and leaders or for them to visit the nearest office for a couple of days.  From there the committee, if still good to go, would begin taking small actions and doing outreach to build membership towards a formal launch meeting, where a leader and/or organizer from another chapter would attend.  At the point the embryonic organization reached one-hundred dues-paying members, there would be discussion about engaging and training a part-time organizer for the branch and including the formal chapter in the governance structure.  At 150 to 200 members, the organizer would be fulltime, and away we go.

All good, but now in the wake of the recent election fast tracking Brexit in a sweeping Conservative victory, ACORN’s membership was surging and new requests for assistance in organizing new chapters was overwhelming existing capacity.  We can add another organizer to meet the need, but that doesn’t really do it, we all agreed.

The discussion got creative.  How could we supplement the starter packs with videos?  Short “how to” lists?  Perhaps something interactive on the websites?  Ideas were bouncing back and forth.

Luckily, this discussion dovetailed with some recent offers and suggestions from some of our partners.  The Everett Program of the University of California at Santa Cruz had talked to us recently about producing and editing training videos for us, and we had discussed tailoring them to members, leaders, and activists interested in building new groups.  Another partnership our French affiliate had developed with the University of Geneva in Switzerland, could also add video capacity in a similar way.  We felt we were getting somewhere and plans were made to follow-up.

The trick to solving this is a question of scale.  How to create and distribute the tools for success, and then realistically understand that tools alone are useless without full training and constant support to achieve success.  Just because you own a hammer, it doesn’t mean that you know how to build a house.  There’s not one fix, but if we can figure out a way to integrate all of this, we’re on to something big and exciting.

Amsterdam      A housing conference took place in a workers’ center built in the heart of a neighborhood in the 1930s in the midst of the worldwide depression that the conveners thought underscored the possibilities even in the midst of the current European affordable housing crisis.  Guest presentations were made by representatives from Liverpool, Berlin, and Heerlen in the Netherlands that included architects, community representatives from land trusts, tenant organizers, and members of the German political party, Die Linke.  The conference was organized by the Socialist Party in the Netherlands with over two-hundred participants.  The ACORN organizers from the United Kingdom, France, and the United States along with The Organizing Forum (TOF) members from Belgium were observers.

I couldn’t help but notice that even with all of these moving pieces, the moderator, an SP member of Parliament from the northeastern area of the Netherlands, began the conference precisely on the stroke of eleven, as advertised, showing real organizational discipline.   We had headsets for direct translation when the presentations were in Dutch, but the audience, young and many much older, had none, even when most of the presentations were in English in a deep tribute to the multilingualism of the Netherlands.  The Dutch don’t fool around! 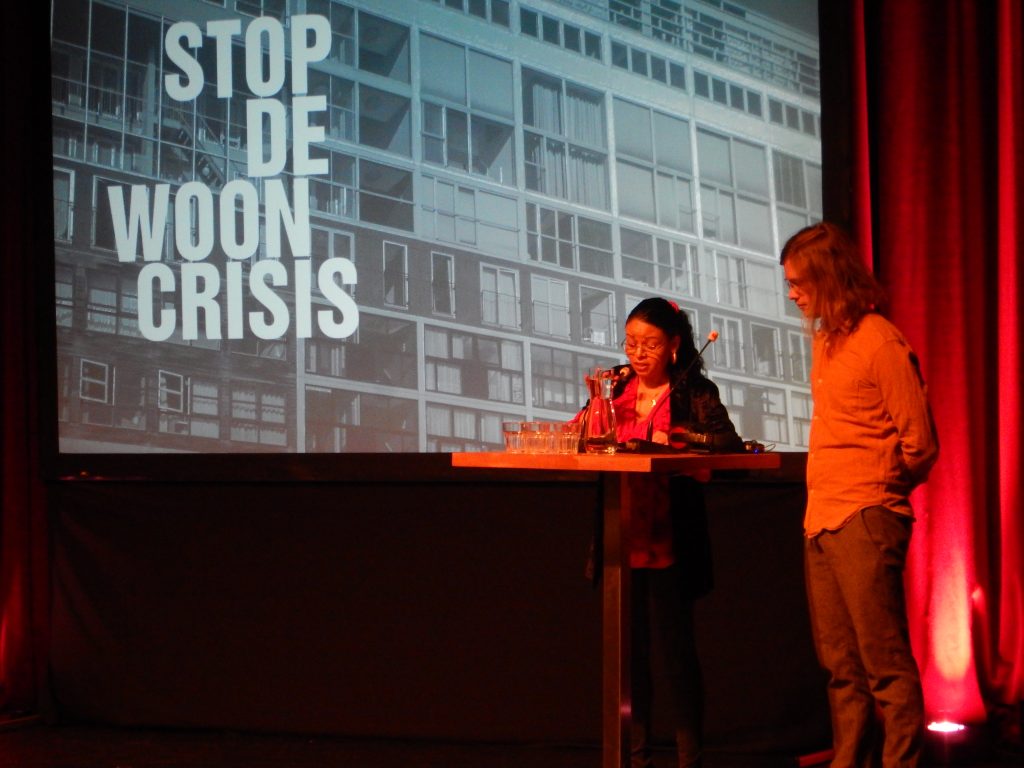 The first presentation focused on the work of a community land trust over several decades in the remnants of Granby, a historically multiracial community in Liverpool, England.  Twelve old Victorian houses had been acquired and rehabbed.  A community center was on the drawing board.  A winter garden and market of sorts had been organized. An architectural and design collective based in London called Assemble had won a Turner Prize for its work with the land trust and community.  I mistakenly had thought that prize had to do with the American media and ranching billionaire, Ted Turner, but it seems it is a very prestigious, British art prize. The project had cost about 750,000 pounds, which approaches a million dollars.  It was an impressive piece of work, but hard to scale.

On the other hand, the Mietenwahnsinn Coalition of several hundred tenant and community groups in Berlin was an effort at hyperscale.  Tenants compose 85% of the Berlin population and the coalition had been able to mobilize this mass base to confront huge landlord concentration in the housing market by companies with tens of thousands of units under management and ownership and rents which had risen as much as 20% in a recent year.  A march of 25,000 and a host of other activities had already won them an effective freeze on rents for five years in an amazing feat.  They now have a pending referendum undergoing constitutional review which, if successful, would expropriate the units of all private landlords with over 3000 units and move them to public control and ownership.  Regardless of how difficult it might be to duplicate these achievements; the campaign has been impressive and groundbreaking.  Certainly, ACORN has followed it closely from afar, so we were delighted to get firsthand knowledge. 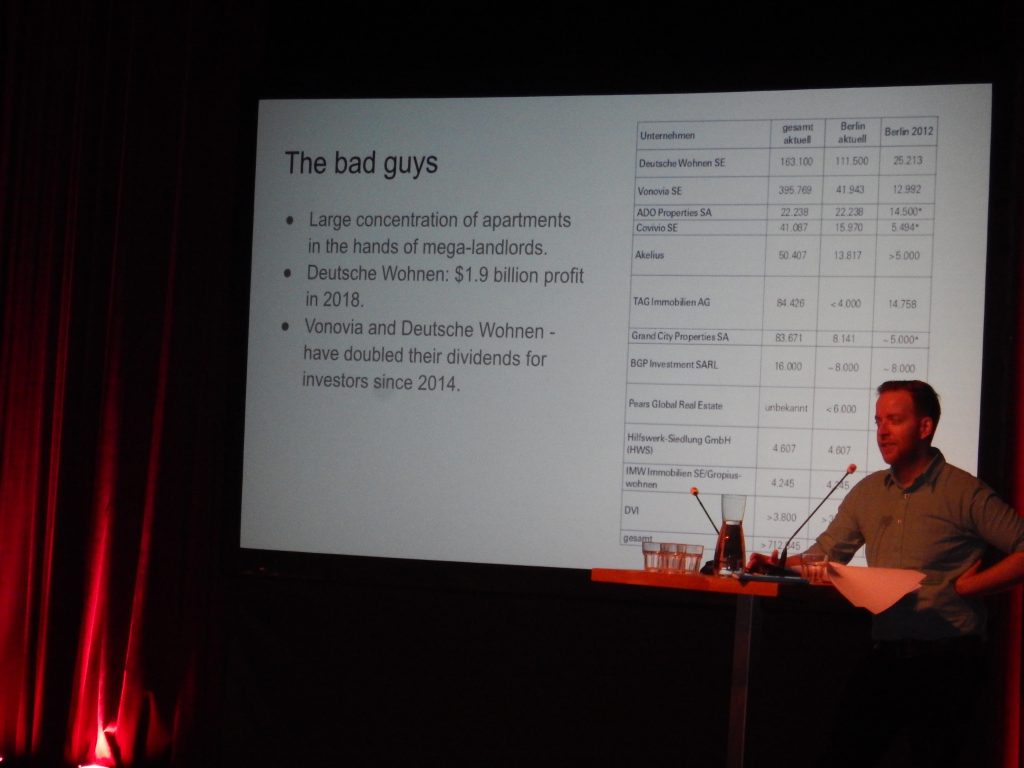 Before leaving for our own meetings, we heard an amusing and insightful presentation by the architect that had transformed the city center of Heerlen in the southern area of Holland, near the German border.  Several months earlier, I had gotten to walk through the completed development which included more than one-hundred units of affordable housing, community and shopping areas, office space and more in a creative and lively construction.  The project had replaced an area of the city center that had been the main marketplace for several thousand heroin users and homeless.  This project was also the fruit of decades of political struggle in order to move forward.

None of these projects were easy to achieve, but the conference did its job of educating and inspiring participants – and for our part, I can add, observers as well.