Toronto: Four months ago Jude Duncan, ACORN Canada’s Toronto Head Organizer, and John Young, ACORN Canada’s executive director were driving endless miles around the neighborhoods of what is called the GTA — Greater Toronto Area — looking at the turf for countless areas that would become ACORN local community organizations in the coming years.  Now, I was back for a series of meetings to connect the work to other initiatives and critical people.  Basically, it was time for a time and temperature check.

Jude from the “Peg” — Winnipeg that is– assured me that it was unseasonably warm for my visit.  Cool enough for me for sure, but for two days straight I listened to one blissful “old timers” reminiscence after another about “when the weather used to be really cold” from Jude, John, and about anyone else who was willing to join the conversation.  Gradually, though for no good reason, I started to believe that this might be true, though I had no way to judge it of course.

We were getting a good start in the neighborhoods with our first organization in East York.  We had topped the first 100 members so we were starting to move.  Our office on Draper was large and ungainly in a 2nd floor walkup that had a lived in feel to it, though it was still clearly a “work-in-progress” with furniture half-assembled, random working and hardly working donated computer bits and pieces, and the usual detris of hard working organizers.  At 8 PM I met our organizing staff as they came in from the field.  It was a diverse and interesting team.  A Mexican-Canadian who spoke English and Spanish; an Indian raised in Kenya and educated in Canada who spoke English, Swahili, and Urdu; and the 3rd young man of Korean heritage, raised in Paraguay and then Canada, who spoke Spanish, Korean, and English.  The fresh faced young woman just in from Vancouver for training in the Toronto neighborhoods before returning to open up ACORN’s office there almost seemed out of place in such a wild bunch.  But, interestingly the staff in its own way was part of the creative brew of cosmopolitan life that defines our low-to-moderate income constituency in the diverse Toronto mix.

While I was meeting the staff, downloading e-mails, and listening to the organizers make the membership reminder calls for an upcoming meeting, which I have done many thousands of times before, though it was still exciting because this time we were in Toronto moving forward in a brave, new world in a new country, John Young was on a local cable talk show pumping ACORN Canada’s “hot off the presses” report on the scandal of the “pay day lending” industry.   Pay day lending has been in the cross hairs as an emerging target for the ACORN Financial Justice Center, and Canada has been the rollout to an interesting response.

In Canada, the criminal code is clear — there is a maximum interest rate that can be charged by these bums, but the truth is different than the law, and ACORN was routinely finding interest rates up to 300%.   The industry was a billion dollar operation in Canada, but totally unregulated.  Our report,  Protecting Canadians’ Interest:  Reining in the Payday Lending Industry, (available on our website www.acorn.org) interesting included some very nicely turned maps of neighborhoods in Vancouver and Toronto which made a very telling point.  Some 600 local branch banks had been closed, many of them in the major cities, and by plotting where these mainstream financial institutions were closing, ACORN could plot where the predatory pay-day lenders had swooped in to fill the vacuum and suck up every penny they could at usurious rates.

In the news and in the neighborhoods, it almost seemed that ACORN was part of what was heating up the temperatures in Toronto while I was there. 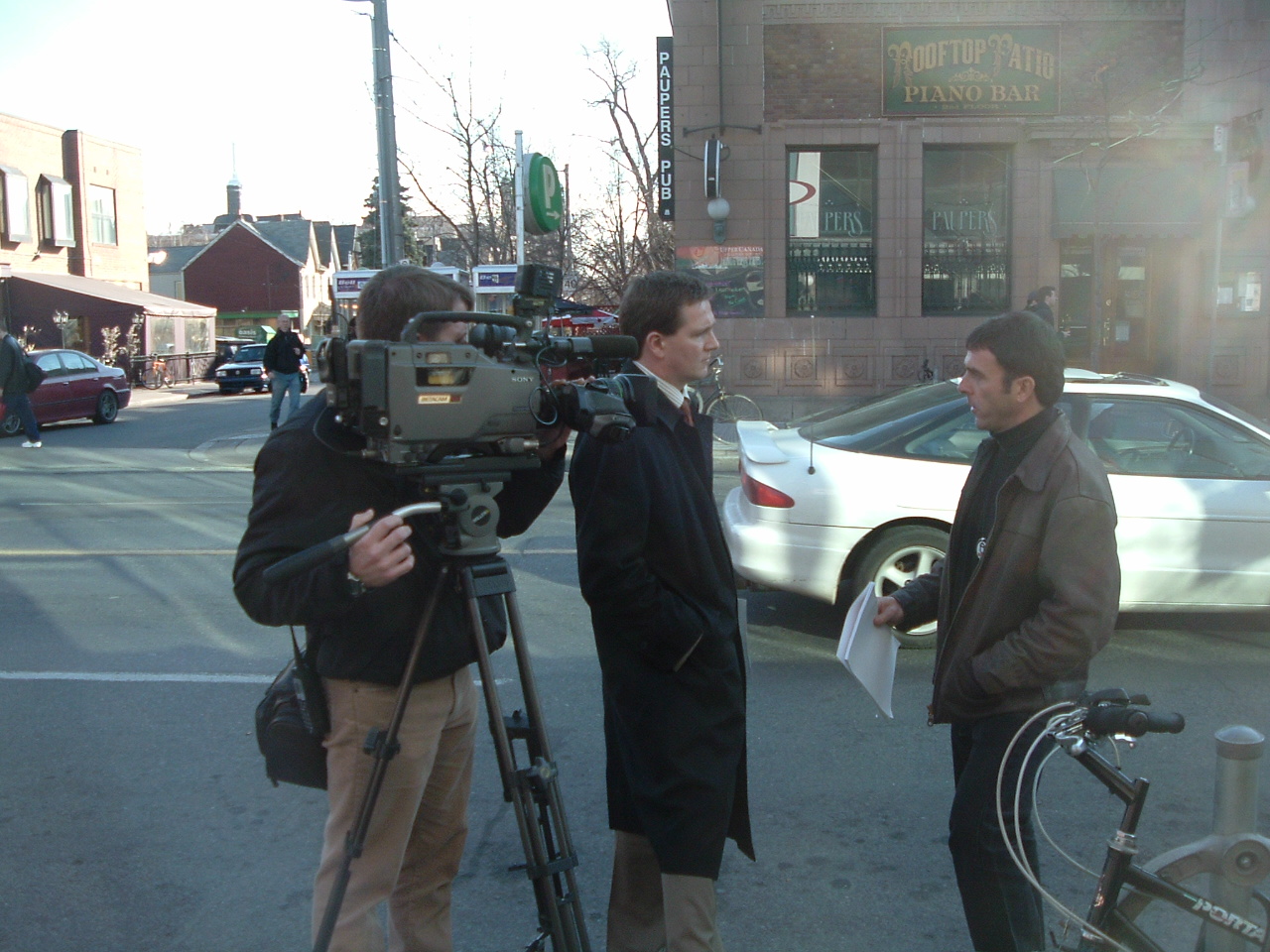 John Young, ACORN Canada, being interviewed on Bloor Street next to a Money Mart office location.