New York: Walking through the New York ACORN office in Brooklyn organizers would look for an excuse to ask me if I had seen “the kiss.”  An up and coming politician from Westchester elected with support from the Working Family Party, which we support in New York, also asked me about it.  The kiss was the buzz!

Seems ACORN’s New York Executive Director Bertha Lewis had laid a big wet one on New York’s Mayor Michael Bloomberg at a grand announcement that we had reached a deal with the huge Forest City Ratner Companies CEO Bruce Ratner and his Atlantic Yards development.  Bruce Ratner has been in the news working backwards from the Sports section because of his purchase of the New Jersey Nets and his announced intention to build an arena for them to pay in Brooklyn.  Of all places!

Except here was ACORN joining the City and Mayor Bloomberg and Bruce Ratner and his operations along with a crowd of 25 other Brooklyn and NYC pols saying that we would stand up and support a huge Squamish-sized footprint of a development in the middle of Brooklyn.  And, Bertha was laying a smooch on Republican Billionaire Mayor Mike.  What’s up?

It was all about housing and the signed and sealed commitment by Ratner with City financing that half of the 4500 units or about 2200 or so would be built as affordable housing for low and moderate income New Yorkers.  After months of hard handled negotiations a breakthrough agreement had been reached on a whole series of significant community benefits and standards which would benefit Brooklyn and our communities from hiring to contracting to day care and back again, but the centerpiece was affordable housing in one of the world’s most expensive cities.  Ismene Spiliotis, director of ACORN Housing in New York, and Jon Kest, New York ACORN’s head organizer had reported consistently that the deal was on, then off, then on, and back and forth until finally all of the pieces came together, which led to the final agreement followed by the announcement.

These are tough calculations.  One does not get to simply celebrate the accomplishment, because ACORN in New York had to continually weigh the impact of a couple of thousand families having affordable housing right in downtown Brooklyn against the likelihood of hundreds of critics who would be carping that about this, that, or the other.  Even the best agreement is never a perfect agreement after all.  Not that something is left on the table, but there are many great proposals that die on the table, failing to win agreement.  It turns out that the price of power sometimes is also being able to stand up to the backwash, even when one wins the nearly impossible.

Bertha gave the Mayor a big fat buss with the cameras clicking.  That’s ok with me.  They will never seeing us kiss his backside, so there’s no sense in hiding our happiness face forward. 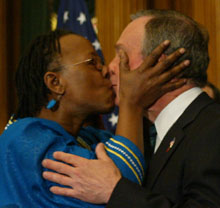