New Orleans:  Dr. Paul Farmer is a rarity.  He’s a hero in his own time and a tireless advocate for better public health for all.  He actually walks the walk and has proven that he will go the full distance through his work first in the impoverished area of central Haiti and now near the Tanzania border in post-genocide Rwanda.  I had read Tracey Kidder’s fan club letter of a book about Farmer and his work, Mountains Beyond Mountains: The Story of Paul Farmer the Man Who Would Cure the World.

After reading his book and seeing that he and his Partners in Health also had done work nearby where ACORN was organizing in Lima, Peru, I had reached out to him last spring through Jon Hiatt, general counsel of the AFL-CIO and his father, the head of Harvard’s School of Public Health, with which Farmer continued to be associated, to see if there was any way we could explore a partnership in Lima.  With the Hiatt’s intercession and introduction he had responded to me briefly through email, but this was exactly the moment that Haiti was descending once more into chaos.  I had noticed a squib a week ago in the Times-Picayune indicating that Farmer and Kidder were going to be speaking at the Tulane University Health Sciences Building at noon on Saturday, so I made a note to try and attend, if I were in town, and fortunately, I found myself here on Saturday.

Arriving to the building, no one knew where the speech was occurring, which was strange, but finally a security guard found the location several blocks away, and as we approached we could finally figure it out — this was pretty much going to be for the docs at Tulane and Charity hospitals and the public health crowd, and not for us civilians.  The room was small and overflowing, and in fact it took one particularly obstreperous and elderly doc making a row about letting the rest of us in to get the folks to allow all of us in the hallway to come in and listen to the standing room only presentation.  This involved some irony since Dr. Farmer already had started his power point presentation and one giant frame about “equity” stood above the scene of outsiders trying to get inside.

His presentation was fascinating in no small part, because he was clearly a rock star to these wannabe student and young doctors wishing they could do what he was doing and be “just like Paul.”  Less enjoyable was living through exactly that experience as a civilian!  In-jokes, doc jokes, and general smart aleck cracks about New Orleans, Boston, six hour flights from Rwanda to New Orleans, and so forth started out as mildly amusing, but finally chafed because it was an exercise in crowd control rather than communication and therefore seemed actually beneath both Dr. Farmer and ourselves.

Nonetheless, when one could put the background noise where it belonged, one could still hear clearly over the ego, the deep commitment and advocacy for equity in health care with a global dimension, and that resonated deeply.  The facts he provided seemed to establish that the methods would work anywhere, if given a chance.  Additionally, his increasing grasp of necessary clinician practice around HIV-Aids in Africa seemed encouraging and extremely important.

More unfortunate was Dr. Farmer’s failure to move past the boundaries of a doctor’s limitations.  He had come to the conclusions that one could not have equitable health care without also looking at whether people have enough to eat, decent housing, accessible education, and other basic rudimentary human rights.  One gathered from the comments back and forth that this was still a controversial position among doctors in general with Farmer’s position being more correctly holistic and others arguing that doctors should stick to their knitting and be health only folks.  But, even in his epiphany here, he seemed not to see past his individual advocacy and the need to assure empowerment for these local communities so that the changes became institutionalized.  Perhaps that was a level of politics that had been leached out in the unstable balance necessary to enable him to operate in Haiti and now Rwanda.  I was left wondering.

I was also left wondering about what had really happened in Peru, and believing that I might have been corresponding with him about a door now closed.  In his entire presentation he never mentioned work in Lima at all.  The only models he was now offering were the rural prototypes of his hospital in Haiti and the new clinic he was developing in Rwanda at the invitation of the Ministry of Health.  One did not want to think that the complexity of an 8 million person city and its sophistication and the inability to simply be the “great white doctor” of legend and tradition had meant that he now sought other fields that were more compatible, but at the least he must not be separated from Peru in a way that I had not understood.

We left with deep admiration for a man doing everything he could, but also once again we were reminded that there are limits to how much any one man can do, no matter how gifted and effective, and why social change, mass movements, and collective activity remain a priori if we are ever to achieve equity in health or anything else in this world.

It is not in a village, but it still takes a village. 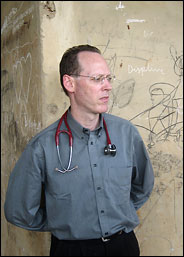 Dr. Farmer, a founding director of Partners in Health.