San Francisco Leaving Baton Rouge last night the plane was packed.
ATA folks who had been sleeping on army cots for 8 days at the Moisant-Armstrong International Airport had stories to tell. They were in the triage and never left the building.
A woman from near Violet behind me on the plane compared this to Betsy, when she lived in the lower 9th. In Katrina she had 12 feet of water and lost everything including her horse, which for some reason was unfathomable that it was shot 10 days after the storm, having survived somehow until then. Her neighbor has 27 Arabians drown.
At one point I walked into the CCI area and eight of the staff were looking over shoulders to try and see one of their houses on the internet. In another office someone had figured out Google maps and it seemed our building on Elysian Fields was standing. Looked like god was ordering us a new roof, but the building was there.
The buzz everywhere was that the Police were letting business people in to recover records and prepare to reopen in the future. A truck was being requisitioned. Perhaps my truck could be recovered across from the airport.
A small problem developed that was sobering. You would have to prove that you had shots: tetanus, hepatitis A, B, C, the typhoid booster, and so forth. I had them because of my various travel, but most did not.
Lists were made. Bleach bought. Articles on the toxic water and all that went with it were re-read.
At the airport with the Red Cross, the Scientology relief ministers, the Homeland Security folks and others, everyone kept talking about the smell of the city. The smell of death was everywhere. The oil, fecal matter and general sewage, putrid food, rot, and mold was producing a devils brew that one felt they could almost taste in the air.
The other big news was the FEMA announcement that they would be setting up tent cities for up to 200,000 people mostly in Louisiana (surely all in Louisiana!) for families to live for between 3 and 5 years. Oh, my god!
An organizer sent me this report a meeting in Baker last night:
30 member meeting at Bethany in Baker tonight; outside; people very concerned that their homes will be torn down without being allowed to salvage anything or decide the fate of their own houses. Everyone is still demanding dignity.

It seems that we should have it. 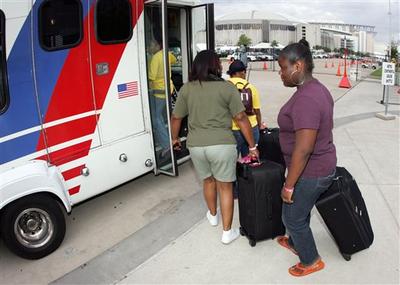