Where was the Corps?

Many people believe it is harder to sleep when a weather front like a hurricane is coming through. In my case 5000 miles away, it was more like the CNN and BBC World News winds than the force of Hurricane Rita, but nonetheless, it made it virtually impossible to sleep.

CNN began showing the footage of the levee breaking on the Industrial Canal in New Orleans and the water pouring into the lower 9th Ward on Tennessee Street all over again. The water was door high on a small, yellow mini-school bus. Part of the sweeping shot kept panning over a small frame house with one side window boarded up against the storm. I knew the house. Years ago, I held an early organizing committee meeting there with some workers who were trying to organize a laundry.

None of this was my problem. The scroll track at the bottom of the TV screen kept saying that the U. S. Army Corps of Engineers was saying that the storm surge from Rita was catching them by surprise — it was too early. Again?!? The woman news announcer on her side of the split CNN screen was asking her man on the spot standing in front of the River at Wohlenberg Park, many miles and another universe away from the lower 9th, was asking in her crisp and clipped British accent whether finally people would understand that “it was not sustainable” to rebuild in New Orleans.

I was not happy about that, but it wasn’t my problem.

My problem was once again, where was the Corps? They were again caught with their pants down, so they said. In the shots around the levee break there were no signs that there had been any recent effort to shore up the levee and add ballast against the expected storm. 1.5 million people fleeing from Rita, and the Corps once again had not gotten the word to be prepared? There were no helicopters dropping sand packs. No tractors abandoned against the surge. No sign that there had been any recent activity.

No press releases. No public discussion needed. No meddling homeowners, politicians, churchmen, community groups, unions, or anyone with members and a stake in the lower 9th needed to be heard. There had been a once and for all decision to drown their voices with another death blow.

After sleeping fitfully some more I awoke again to read an email that other levees were also breaking elsewhere in the city. I wonder if the footage will show no preparation and no activity by the Corps there as well. I doubt it. I could be wrong, but I think the Corps just made sure that they will get to expand the Industrial Canal they way they always wanted without all of the public opposition about the needless waste involved and the impact on the neighborhood.

I don’t like the looks of any of this. This is no way to make a decision about the future of the Lower 9th 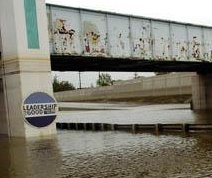