Taking a moto in Phnom Penh is a literal experience. These are not the moto-cabs of Manila or Delhi, where you sit in benches in the back. These are small motorcycles where one simply hops on the seat, grabs whatever, and away you go. The streets in this million person town are on a numerical grid. Street 63 is literally street 63, as opposed to street 65 or street 235 or whatever. That does not mean the streets do not come and go or that 63 is necessarily right after 62, but nonetheless the numbers have a meaning, it’s simply a matter of one’s divining the exact clues.

I met Ly Korm, the President of the federation along with his top staff at their offices. Organized efficiently, one came in, parked one’s motorcycle (the most common means of transit obviously) took off one’s shoes, and proceeded to meet. I liked their offices. The walls were covered on every side with pictures of meetings or strikes in their chapters (which they called unions since this was a federation) on large bulletin board type postings.

They were doing a good job, and they were growing rapidly. Since 2003 they had mushroomed to include 19 different units of which 12 were hotels. The rest were catering, airport related, cleaning, and general service, including security. They now had 3600 members. They had won about 8 different collective bargaining agreements covering 9 of their locations, which put them ahead of many other comparable unions in this slow and difficult process. They told me stories of learning about negotiating from Jason Judd, my friend and colleague originally from Local 100, who had spent several years helping organize here with the Solidarity Center.

They were ambitious. They had their eyes on organizing casino workers near the Thai border and security workers where they could find them, along with a mess of other targets adding thousands of workers.

The mechanism for recognition, as I understood their description, was established through several sections in the relatively recent Cambodian constitution, which allowed workers to petition for recognition with a very small percentage, though usually practical considerations meant that one went to the Labor Ministry with 50% plus one in a showing of support. There were sometimes procedural challenges, which could delay recognition from 6 to 18 months by employers, so one had to be persistent. They told me the constitution required coming to an agreement, if the union was recognized.

They had five (5) strikes last year. One strike with four (4) units lasting ten (10) days around the classic hotel issue of distribution of service charges and one lasting five (5) months. Average wages for garment workers and others Brother Korm told me was about $45 USD per month. Their work had raised his members to an average of about $65 USD per month.

I could not follow all of the politics, but unions were aligned with either the pro-government party or the pro-democracy party. The Tourism and Service Workers were pro-democracy, which was all to the good, and warrants more investigation while I’m here on the ground.

As always, we got the bottom line. Dues were the equivalent of fifty cents ($0.50) per month per member, but it turned out that in the collective bargaining agreements negotiated thus far only a few of them actually included dues check-off provisions by the employer, which meant the team were mainly hand collecting the dues on a monthly basis. They were very clear with me that they did not enjoy this part of union work whatsoever. When the rubber hit the road, it developed that perhaps only two (2) of the existing units had dues check-off with a 3rd, the Hotel Intercontinental, coming on line “soon,” they hoped.

They asked what union representatives were paid in the United States, but I spared them the details, and told them it mainly depended on the kind of workers represented. They assured me that they made more than their members, but not that much more.

They were not happy to hear that unions were getting weaker in the United States. They were building unions on a US collective bargaining model, so the news that this might not inevitably lead to mass organization and victory at the end of the day was unsettling, though we tried not to dwell on it. They asked about the number of federations in the United States, and I found it difficult to describe the current split between the AFL-CIO, with which they were familiar because they received financial support from the Solidarity Center operation, and the Change to Win coalition without describing CTW as a second de facto federation.

These were excellent organizers, who were likeable, serious, and effective. I described to them some of the organizing experiments being conducted in the US. The constitutional protection for unions in Cambodia extended to all associations.

We talked about organizing the informal economy. They understood that their market was a small niche of the total Cambodian workforce. We stumbled around on the discussion of leverage and power, because this was still firm by firm organizing without much thought to the long term strategy.

For the life of me though I could not escape the feeling that we had lead these organizers down a path that would bring them to the same dead end that we had traveled in the US. My search for alternative organizing models around the world seems to keep bringing me back to the beginning of the circle.

The nice thing about riding a motodup is that thankfully they are forced to go very slowly since they travel across lanes of traffic and sometimes against the flow of the opposite lane. It felt cooler and almost refreshing to ride back in the early evening with raindrops hitting my face from time to time. 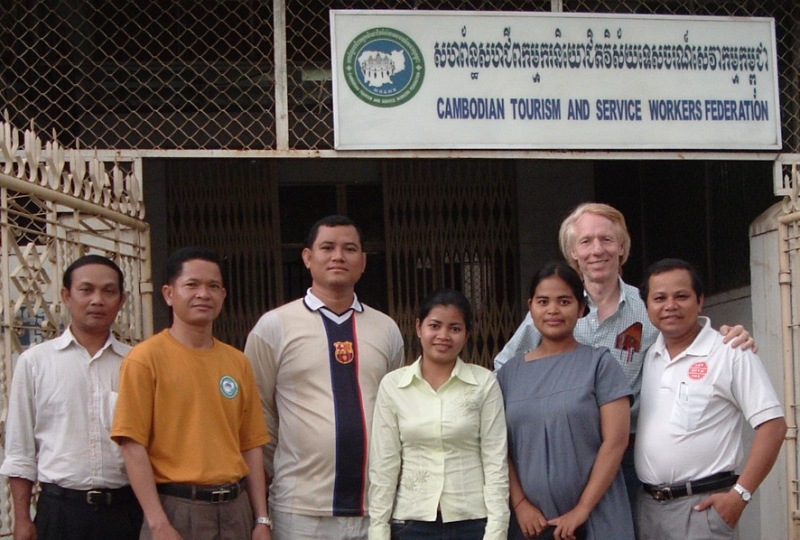