Malaysian Air flies into Kuala Lumpur International Airport across low rolling hills dotted with palm trees. These are not ornamental palms, but production palms valued for their oil. The hills look dryer than one expected in this area of Asia. Hitting the runway the airport from a distance looks big, but stark, just boxes of boring concrete.

Once inside though another world opens up. Coming down a concourse one all of a sudden notices a forest of greenery growing outside of the windows between the buildings. Not visible before hand one finds between the boxes a series of building clusters that arch pod-like in the middle of the airport creating an architectural metaphor for the palms stretching for miles outside of the airport.

Modern trains tunnel below the runways to zip you from the core airport to the various sub-concourses. Wooden arches are built over giant struts. Sun comes in everywhere between rows of seats and scores of stores that are the heart of industrial tourism’s utilization of modern airports. Burger King, Starbucks, Italian sandwich shops, French bakeries, English bookstores, and all manner of fancy, stylish trendy world-brand outfits are positioned in the intersections of the trains and the exiles transferring from one location of the world to another.

At one level this airport bake-off between Hong Kong, Kuala Lumpur, and Singapore, which one hears is another world-class air conveying belt, would just be so much of too much, but to KLIA’s credit one finds it’s not just about the dollar. The Samsung free computer stations attract their lines of course and the TV’s are cool and elegant in their presentation, but one also finds chairs built for nothing other than a travelers comfort with both head and foot rests which are clustered throughout the concourses.

Hey, KLIA, thanks for that! 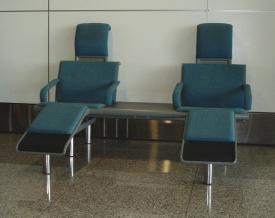