New Orleans   After more than 42 days, I was finally able to return to New Orleans — a least for a minute or two before curfew impeded in this land of bad water and low lights.

I had to beg to get to New Orleans. The flight from Hong Kong missed the Los Angeles connection. Delta suggested that I wait for 2 days in Los Angeles and fly instead to Baton Rouge. At 4 am on Monday morning I opted instead for the redeye to Salt Lake City, on to Atlanta and finally arriving on Tuesday morning in New Orleans, where for the first time in my life, I would rent a car at the New Orleans Armstrong airport and pretend I was a visitor just passing through instead of a citizen of a great, battered city trying to assess the odds on return and finally see the “facts” for myself.

I steeled myself. After a two-week hiatus I read the New York Times on both Monday and Tuesday. Bywater had ceased being a working class district in the reporter’s description and had become part of the eerie wasteland now. No one failed to comment on the mosquitoes, the flies, and the smell everywhere. Where else in America can one be treated to reported arguments on whether or not it is really safe to bath in water that is unfit to drink? For that matter where else in America do they recommend that you have the whole hepatitis series of shots as well as your tetanus booster and a couple of others shots for good measure in order to enter safely. I felt it ironic that the tropical diseases center at Oschner Hospital had made me take the same series of shots to fly to India 2 years ago, as CDC, FEMA, and the City of New Orleans now recommend for the everyday citizen of my fair city.

Flying in on the last leg from Atlanta to New Orleans the conversation in the jam packed plane is split between hustlers and victims — people trying to profit from the disaster and the folks trying to survive the disaster and see if anything is left. Jesse Jackson was in 1st class with an aisle seat — when I spoke to him he said he was coming into help. Seeing the headline later that Clinton had come in the same day I was there, it was easy to put 2 and 2 together.

Driving from the airport almost seemed normal until I crossed into Orleans Parish and within a mile saw a small motorboat still abandoned by the side of the I-10. Taking the Elysian Fields exit, I had clearly come off the grid. This was not an “open” area yet, even though reports everywhere indicated that Mayor Nagin was opening everything (but the 9th ward perhaps) by Wednesday. There was no traffic. RTA busses were still abandoned with their doors swung open in the middle of the neutral ground. Nothing was open.

Arriving at our office, luckily I found a beehive of activity especially compared to the wasteland everywhere around. The traffic seemed to consist only of police or National Guard humvees driving back and forth. Standing and looking the building one might be stopped but it would a FEMA car, looking for directions to some location to certify a house.

The office was bad where it was bad and good where it wasn’t and luckily the good outnumbered the bad, so it was possible to be hopeful. And, regardless of hope, we had boots on the ground and that always makes a difference. Work was being done. Windows were open. Mold was dying, rather than growing. Wet was drying. Carpets were being pulled. Tarps were over the roof damage. The going backwards had stopped, and the going forward — come hell or high water! — had now begun.

But, post-Apocalypse New Orleans was a deeply unsettling and disturbing place. Makeshift stop signs had replaced traffic lights. Not that it mattered. One stopped from habit and discipline. There were no cars really. There were some barebacked 18-wheelers trucks that had been pressed into service as the face of FEMA. Some police cars and National Guard humvees going back and forth, going anyway they felt on one-way streets, u-turning wherever the mood hit them. Ran into an insurance adjuster, and he said they were not even looking at houses yet, businesses came first. Gave directions to a FEMA subcontractor — seems they have to at least look and make sure that there was a house where a claim had been made. We had lost a battle here, and it was unclear who was going to return to the field to move forward.

Went into my neighborhood a couple of miles down the River in the now famous Bywater area, and maneuvered around deserted busses, fallen trees, and loose wires still dangling. There was some activity at Fredrick Douglass High School across from my house. There were two white government looking cars briefly parked at the library around the corner from me, but when they drove by they did not even nod. The place looked naked now with the trees reduced to brush piles in the street. FEMA had been picking up every 3rd day, so the piles were being replaced, but they were extensive. The house had a blue babushka now blowing in the breeze, as we waited to move forward and once again secure the place against the elements before it was too late. But, we were checking off the list and moving forward.

Everywhere I stopped was another verse in the same sad song. Driving down Elysian Fields, the pathway to heaven in Greek mythology, from the office near the River the 5 miles to the Lake was an even more sobering picture. Crossing St. Claude only a 100 feet from the office I could see a 6 inch water line on the houses facing St. Claude. Not good, but a situation that would allow one to return. At the I-610 crossover on Elysian Fields the water was rising to a couple of feet. The fire station there was a twisted shambles. The new work on the Living Waters Baptist Church may have been saved next door, but I couldn’t tell. Past the I-10 crossover another half-mile away (the brand new Lowe’s was open and working!), the water was at the 4 foot mark along the houses. When Gentilly Boulevard crossed Elysian Fields one could see that nothing would be spared. At Brother Martin High School there was a score of people working and pulling things out. The new construction looked like it had taken a beating, but they were in the mix.

Past Mirabeau and coming towards Prentiss, St. Raphael’s had at last a 6 foot water line. The Gentilly neighborhood is a middle class area of most brick post-50’s style construction. All of these places would have had water. There was not much activity — in fact past Brother Martin I only saw FEMA. This is not the Lower 9th Ward, but this is an area that will also have to be rebuilt from top to bottom. Where it’s brick, talking to Mike Shea at ACORN Housing later, it sounds like one builds it back “inside out,” but it can be done, and done safely.

The new Popeyes that had been build on a six-foot rise still had a 2 foot water mark past Robert E. Lee, meaning the water had to have crested here at perhaps 8 feet. The Walgreens was closed. Caterpillars were pulling out the guts of a small 2-3 story office building next to Bud’s Broiler.

Past Leon C. Simon with UNO on one side of the street and the Lake Oaks neighborhood on the east side it seemed the in-fill from the Levee Board had left this whole area without flooding. Driving through one could see tree and wind damage that came with a very strong hurricane, but the water line was less than mid-way up the yards. These houses looked down at the water, rather than up — and that makes a difference!

I talked to the only person I found on one street — a worker mowing grass, which almost seemed an odd thing to do in the middle of a ghost town, but, hey, I understood. He said he used to have a business on Diamond Road (far out east New Orleans) and he lost it and his house, so the next week he put a sign up that he was in the demolition business. He new this neighborhood was back here and had already picked up a lot of work on one of the “bird” blocks, and now was working on this one. While is mower purred away, he swatted a fly, and we looked at down the curbs at the refrigerators lined on both sides and taped around with duct tape. I said I was confused — it looked to me like there was no water here. He said simply, they had some money in this area, so people just rolled the whole refrigerator out to the curb, rather than cleaning out the insides. “Smells like dead bodies, “he said, “so, people would rather just bury them and go on — me, I’ve got to work.”

I turned around. Walked to the rental car, and drove past all of the ghosts still walking on the wasteland that is my city now. 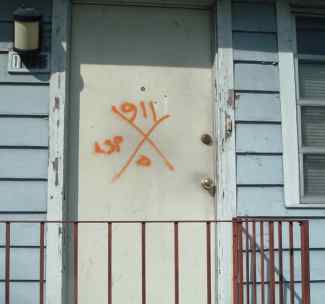 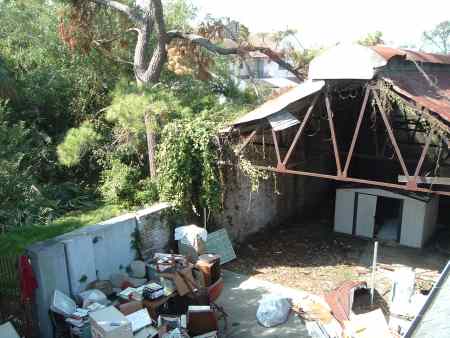