Ok. I liked the airport — you know that. I was a little uneasy my second time around though when I noticed there were three lines — 2 that went through security and one — the big one in the middle — that just let you walk through into the concourses without bothering to go through any detector. That was unsettling! Later I was partially assuaged to find that we were re-screened at the actual gate, but…

You hardly get into the cab when you start hearing about the injustice that lies at the foundation of the Malaysian system — beneath the towering, world class city and skyscrapers and the seeming hordes of Australian tourists. Half of the population is ethnically Malay, while 30% roughly is Chinese and 20% roughly is Indian. The minorities are put on a rigid quota — not affirmative action — system which seems to regulate everything from admissions into universities to public sector, government jobs. In the service sector everywhere you see Chinese and Indian men and women, since they are pushed there by the lack of opportunities elsewhere.

Not easy to win change either. There are elections for the “down ballot” races it seems, but at the top the Sultans (there are 8 of them) simply switch off every couple of years when they shuffle which one gets to run the country for that period of time. You can say there was a vote, but you could never say that was democratic.

Little wonder that in Indonesia we were hearing about so many problems with domestic workers when sent to Malaysia. They were probably being treated like Chinese or Indians or something?

One minute one is looking up at the Petronas Towers and wondering how Connery and Zita-Jones did those scenes, and the next minute one hears a pop as air fills the chutes of hang gliders jumping from the tall space-needle only a couple of kilometers away. I was just passing through, but somehow this city was not adding up to me yet.

Obviously it is time to go home! My next real stop will put me in New Orleans for the first time where the contradictions seem to be trending the same way. Better keep the word on the Sultans’ system, because they would love to do the same on Poydras Avenue. 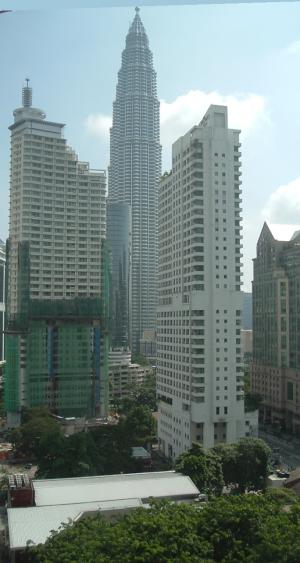