It took going out of country with the Organizers’ Forum to figure out that we were in a global revolution in employment with the informal sector crowding out the formal sector or the workforce. Gradually, we came to understand that part of what we were organizing in the US were also contingent and informal workers — home care workers, home child care workers, garbage hoppers, wait staff and the like.

Having stumbled on to terms that finally described what we see around us everyday, it was like finding a language that we desperately needed to describe simple and common things all around us. Here is the short course — the informal sector is exploding throughout the world to the degree that there is such a shrinking formal sector one can almost wonder some days if it will survive at all.

We talked to a lot of labor organizers and leaders in Indonesia.

The best organizers we met were with ASPEK — the Asosiasi Serikat Pekerja Indonesia (ASPEK) — they were a rapidly growing federation, they were young and well organized, they were the darling of global union federations, they were organizing in stable sectors among white collar and other workers, and they had a future. They were not particularly organizing in the informal sector and their view of a new strategy had to do with a way of marketing approach. There is no doubt that they are going to grow, but will there be enough there to allow them to drive others with them.

Meeting with a large group from the town of Surakarta or Solo, as it was commonly called, we ran into several groups of organized informal workers — shopkeepers, street singers, bekak drivers, and others. We were excited to find them all under the banner of the Peoples’ Solidarity — SOMPIS and KOMPIP, an NGO. Each one of them was small though and the direction of their work was legislative, rather than practical.

We met in Joyga with organizers of domestic workers in fact they claimed to have a 150 members of the only Domestic Workers Union in all of Indonesia. They were serious and committed. It was hard to believe that they would get traction though. We met with a variety of groups who were dealing with this critical problem. More than 2,000,000 workers had been exported from Indonesia to the Middle East, Hong Kong, and Malaysia for domestic services. The abuses were almost as commonly cited as the low wages and the clear fact that these workers were clearly indentured servants.

These were great people. We loved them. For the life of us we had trouble believing that they could really change this country.

We have to find a real system and a real model that is sustainable for this work. The numbers are growing and the answers are becoming more difficult. We’re being outraced to the bottom — the jobs are getting there but the organizing plans have not caught up yet. 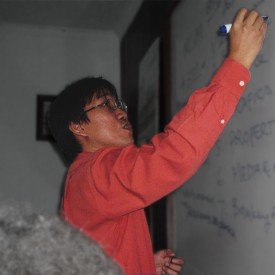