Secretary of Defense Donald Rumsfeld had a candidate to front for the Iraqi people — Dr. Ahmad Chalabi. He had been running the Iraqi National Congress for many years from the United Kingdom. He had a degree from the University of Chicago. He was connected. Former Secretary of State Colin Powell was not as certain and neither was the Army. Each in turn had their own ex-pat Iraqi leaders who they hoped would get traction once repatriated to home soil.

Make no mistake though. When they were not in Iraqi, but working the world promoting schemes for liberation armies or business ventures or this or that, they had friends and sponsors based on the value that these men and their political formations served to their sponsors, not for the Iraqi people. They were tools in the hands of others.

Watching the embarrassment of the Bush Administration when it was trying harder to install provisional and puppet fronts for the invading force, I would have thought we might have all learned lessons about making sure as an a priori in these matters that one should be very, very careful not to anoint someone from afar, who can not operate on the ground. Now in the middle of the post-Katrina shakeout, I can see that this is not the case. Progressives seem not to want to learn what the conservatives have taught us. We want to make sure we learn the lessons the hard way with our own embarrassment.

In the wake of Katrina everyone and their brother seems to suddenly be interested in New Orleans and trying to figure out a way to insert themselves and their issues into the muck that remains of the city. Some of this is a good thing.

Where it gets hairy is when people try to create representatives for the people for the purposes of the sponsors and the donor community, just like we have seen in Iraq.

New Orleans Mayor Ray Nagin tried this strategy slightly with his recent appointments of a commission, but was simply the usual home cooking from the Poydras Street business crowd with their favorite front people and the usual gang of suspects, just a few bigger names.

The most bizarre, and in some ways insulting, question I have been asked in the wake of Katrina is to identify groups to act as sponsor go betweens, just as if New Orleans was another foreign country like Iraq. It is insulting because whether we are talking about almost 10000 family members of ACORN in New Orleans or a couple of thousand members of Local 100 from the city — we have a base, it just doesn’t happen to be in New Orleans, since it is caught in the diaspora now.

A good example is something called Community Labor United (CLU). This is a little bitty thing of maybe a dozen or two activists that has convened meetings off and on for years mostly on Saturdays for a while at Dillard and last I heard at the Treme Community Center. Mainly it is not labor but it has a couple of well intentioned AFT teachers that are personally involved and Curtis Muhammad, who ran a small local union for UNITE for a couple of years before he retired, was often in attendance. Mostly I didn’t recognize the few other folks there, but some may have been students or whatever. Curtis is a good guy, but good love him, he wouldn’t be able to really move any thing in New Orleans, because he doesn’t have the base, the weight, the contacts, or the history god love him. To the best of my knowledge CLU was semi-defunct in recent years and certainly never had a paid staff or any capacity. Back 5-6 years ago when it was trying to first get started, we used to send folks to some of the Saturday meetings because they wanted to support our work and act as a bridge to other communities, but over the last couple of years that has also petered out. But now a wave of water moves through New Orleans and I actually get inquires about whether or not CLU can help in some way.

Huh? What? They are nice people and we count them as friends and allies, but are we talking about something real there? Of course not! Could they handle money? No reason to believe that. Do they have a base in New Orleans? No not whatsoever. Heck, I don’t know if they could organize a two car funeral if they were driving both cars. They have only convened forums in the past to talk about stuff. If that was needed, they could do that I suppose, but there are a lot of folks who can do that.

How do Calabi’s happen? Just this way! CLU was somehow mentioned by Naomi Klein in a piece in the Nation. I have no idea what she knows about New Orleans, but I imagine she was grabbing something out of the hat. The article gets reprinted some places, and all of a sudden Chalabi is out and about in New Orleans.

Habitat and Enterprise have had very small, precious operations around housing in New Orleans which are producing very, very few houses annually. Best believe they are everywhere now as if they could really do something in New Orleans. This is a President Bush prop up.

But, a prop up is a prop up, and there will be a day of reckoning. People will move back to New Orleans. There will be a battle for the future of the city and people will not be able to be ignored or merely represented from afar. Their opinions will matter more than the opinion pages.

Hopefully progressives will not be caught with Chalabi on their hands and learn one lesson from Rumsfeld about this phenomena. 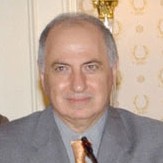 Ahmed Chalabi has received over $35 million tax dollars, and was installed as acting oil minister of Iraq.