Sunday was a long day in Louisiana. At 7:00 am lunch packed, water bottles filled, truck gassed, I was on I-12 moving east from Baton Rouge in the cool, dewy morning of an early southern fall.

First, stop was Denham Springs. Picked up my brother at Exit 10 standing by the road, where he and a colleague were staying for the week with a kind, Quaker woman in her 90’s, who had been housing refugees almost continuously since the hurricane. I-12 to I-55 to I-10 to New Orleans turned out, according to Mapquest to only be 1-mile longer than the normal route straight through I-10. Who knew? Traffic seemed to be picking up going across the Bonne Carre Spillway into Jefferson Parish, but it was a mirage and once again dissipated as we crossed the Orleans Parish line into the city. Taking the exit at Elysian Fields, we turned towards the Lake, and had the feeling once again that we were off the grid.

It was Dale’s first time in the city since the flooding. He was stunned to see the water line on landmarks he had passed hundreds of times. He kept remarking on the nudity of the neutral ground where so many of the trees had died in the deep and poisonous water. It was now all brown ground and much of it had been cleared by FEMA contractors. All that was left of this very green city were occasional live oaks, because they have deeper roots.

We were able to get into our folks place for the first time. Dale checked for whether or not there was any internal water damage from the roof problems that Scott Hagy, our Wyoming imported contractor, had blue tarped, while I began the job of cleaning out the refrigerator and deepfreeze after almost 6 weeks of no electricity. Up and down blocks in the neighborhood refrigerators stood, wrapped in duck tape, like soldiers waiting for a pickup. This was the smell permeating the neighborhood, like entombed bodies everywhere going to their own separate morgue. This would be a job, at least so we had heard, for the National Guard, since disposal had to be more carefully handled to prevent Freon problems.

But, we were “old school.” On the phone my folks had been clear, I would do whatever made sense to me, but one could hear between the lines their Depression era skepticism that one would ever throw away an appliance as valuable as a refrigerator, simply because there was a nasty job of cleaning involved. I understood the implicit work order completely, and two hours later was relieved to be done with this job and leave these white warriors open in the breeze of the kitchen window, letting nature and baking soda do the rest of the job.

Scott Hagy has built industrial plants all over the US and the world, mainly for Pepsi and Coca-Cola. He is used to the job of showing up with the demand to do first class construction and first solving the problem of canvassing the nooks and crannies in the local language to find a crew to do the work. Scott is the partner of ACORN’s only Wyoming based staff member, Janet Reasoner, but both of them had worked for years in New Orleans, so they knew the likely drill, and quickly Scott had volunteered to get down and take charge of getting the offices and staff back up and running. He had showed 10 days before with a U-Haul It and his own electrician’s truck, ready to move, and had performed miracles pulling pieces together on the ground. He now had a crew of 30 folks working hither and yon, almost all of them formerly part of the community of Vietnamese fisherman who had run the big shrimp boats into the Gulf and in-land waters as they had come to center themselves and their work in Plaquemine Parish in recent years. Overnight most of them had gone from hard working success with their own houses and big, heavy duty boars making $80-100,000 a year to having nothing at all after Katrina. Luckily, many of them also had off-season skills as dry wall hangers, painters, and carpenters, and Scott had the experience to now that to have and hire a crew of workers meant offering a living wage and hustling housing at the same time for men who had taken a hit. These were now our people, and they were much in demand! Not every fella swinging a hammer can tell a story of people sitting on the curb weeping with joy as 5 or 6 folks clean up limbs and tack a tarp over a leaky roof, but this was now becoming routine for Scott and his team.

Scott and I met in my office. What a delightful experience! Finally having the key with me, I was able to open the door — it looked like a hurricane had hit there, but it had not, it was just the usual mess of my own doing. I was able to pick up my checkbooks so I could start settling up with the kids schools and friends who had stood me loans here and there. I found my prescription. Squared up with Scott, and we made a plan of attack for the next stages of the campaign to recover 1024 Elysian Fields.

From there I was on mold duty at our house. Hurricane Rita managed to push more water through the hole in the roof courtesy of her sister Katrina, so there were spots forming in various places on the bedroom ceilings, so I needed to make sure I got up there on a ladder and bleached them to death before any of the home team saw this happening. Pleasantly the lights came on in Bywater finally making the house almost seem like normal. It seemed odd to sit on the steps and eat my lunch and look out where trees used to be and where nothing but stumps now stood. Neighbors walked brazenly into the yard now somehow sensing that Blanco was no longer on duty.

Weather boards were gone at the place up the street where my brother lives. Fences down. An air conditioner took a death plunge from the attic to the patio. Shutters protected the windows and then felt dead in the street. Simple tasks for another day. No damage worth the heartache — just repairs on the growing list.

I drove out Franklin Avenue towards the Interstate for the first time. Franklin Avenue Baptist, the largest African American church in the Southern Baptist denomination was still locked down with a water mark at 4 feet running along it’s new addition to its main sanctuary. Rev. Luther was appointed to Mayor Nagin’s business front advisory committee, probably to convince him to rebuild. A 7000 member mega-church will rebuild, but I wonder if the Franklin Avenue Baptist Church will still be on Franklin Avenue. I had to drive my truck through two feet of water still standing beneath the underpass. A car was overturned on its roof at the top of the incline as I came out of the water to get on the Interstate. Time was still stopped here.

I drove on out past New Orleans East. Bulldozers were already scooping up small mountains of siding, insulation, roofing materials, refrigerators and all manner of things. I drove by neighborhoods frozen in time. Cars parked in front of houses silently. Dirt marks having drowned them there forever. Trees, grass, everything brown and poisoned.

Bayou Savauge Park is one of the largest federal parks in a city limits, but it was browned out now as well. The twin spans of the Interstate were down so the only way to cross Lake Pontchartrain was on old Highway 11. The trip from New Orleans to Slidell took two hours in bumper to bumper traffic to go what normally takes 35 minutes.

The devastation was almost total among the fishing camps along Highway 11. One drove through a ribbon of highway with small mounds on both sides of the road broken by graded slips where a tractor had gone. Refrigerators would be in one mound. Everything else was pushed up by the dozers until trucks could haul it away to newly created landfills around Slidell.

Past the camps no businesses were spared it seemed. Crossing I-10 and proceeding out Highway 433 towards Fort Pike at times I felt like I was driving through a lumber yard with huge logs cut on both sides of the highway. The road turned out to have only been cleared yesterday. I knew this area too well. Over the last 3-4 years we had a secret hideaway along Highway 433 — two acres of swamp with a fishing camp perched on it abutting what was now a National Wildlife Refuge. The place had stood for many years and against many a storm. Plugs were 2-3 feet high off the floor. There was no sheetrock in the camp. One let the water run through it. A couple of years ago we got 18 inches, pulled the carpets, hauled out the dead reefer, and were back in business as soon as the bridge fixed to the Bayou Island Camp, as we called it.

The devastation had inoculated me as I drove closer. I knew the bridge would be gone. I was hoping there would be something there, but the more I could see that the wind had picked everything up and blown it off the pilings, the more in my heart I had to recognize that hope would be better spent on something I could impact more fully. There were only a few camps on my side along Salt Bayou. Driving closer, the red camp only had a piece of the boat shed left. The white camp next to it was gone. The big purple camp that had been our landmark driving to the Bayou Island was all gone — just pilings standing in the marsh. The camps above ours were all gone except one standing with blue tarps and big holes everywhere.

Our camp was nothing more than a pile of rubble. Standing across the bayou I could see where there were still one or two small patches of decking. One or two tall supports were standing. Otherwise what does one say about nothing.

Pelicans were flying along the bayou course. I used to sit typing next to the front windows of the camp. It is where I wrote the Majority Unionism piece and virtually every major thing I’ve written in the last four years, going out on Saturday night’s when in Louisiana and coming back on Sunday’s at noon. I would watch the kingfisher hit the water past the bridge not far from where the alligator used to slide into the marsh. We would canoe along the back waters and bayous that became the refuge and watch the fish jumping ahead of us, unused to anything or anyone on their water. We were in the bayou and its wildness, but could look another direction and on a clear day almost see and sense the city.

We have been the lucky ones. Our house will recover and be ok. We have jobs and will soon have an office in New Orleans in coming months. We lost one car, but kept the truck. We lost the camp, but still can feel the power of the marsh and have been taught again the price of pristine wildness right at the heartbeat of the city.

Batting .500 is a good average in the time of Katrina. 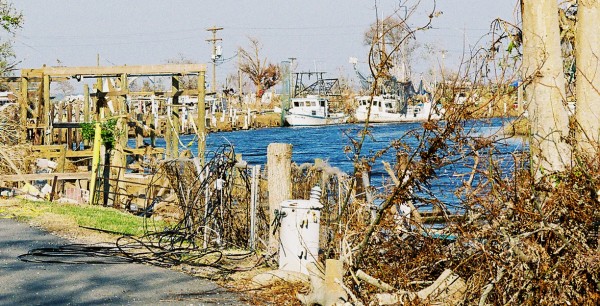 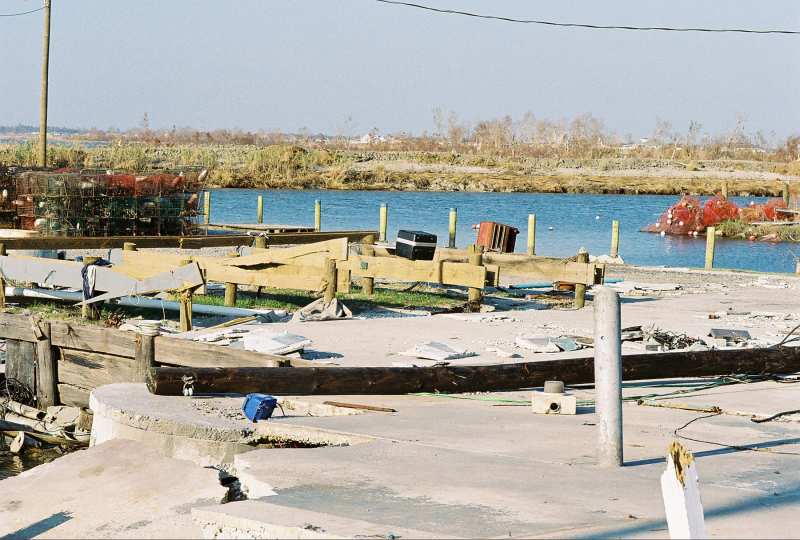