I landed at close to 2 AM in the morning at Logan Airport. It was close to 3 AM before the head found the pillow. It was small comfort to find “my story” on the front page of the Boston Globe where radar problems had knocked the flight schedules — like mine — on their heads. In my heart I was blaming the travails of flying out of a country town like Baton Rouge, but my mind had to admit that it was actually the city of sophistication along the Charles, not the overstuffed village on the Mississippi.

Running in the spitty, fall weather of a Boston fall in the Commons was a wake-up before my first meeting at 7:30 AM on the concourses of the Prudential Center. The day unfolded rapidly along a fast track. A briefing for our friends at the Green Corps (www.greencorps.org) environmental organizing class of 2005 on Boylston Street was followed by a meeting with Jim Fleischmann to update me on the critical efforts to get the fusion initiative on the ballot as the Massachusetts Election Freedom Act.

The first 10,000 signatures were in now — 90,000 more were needed by November 30th. We were helping drive a large coalition that had consolidated around the opportunity to add important tools for electoral activity for the progressive forces in the Bay State. Money was coming in, but we were in the crunch and needed another $100,000 to make it happen. The lessons of our close defeat recently in Albuquerque on the living wage ordinance were central in my mind listening to Jim:   we can not afford to lose these kingdoms simply because we can not find a horse. It’s only money — but we have to have more of it to make the difference.

One o’clock found me at the Scraft’s Center — an old candy plant now converted into office space in Charlestown — which I remembered running by several years ago when it was nothing but an abandoned building hiding behind a sign. SEIU Local 888 had a large, well organized space on the 2nd floor and its President Susannah Segat and Organizing Director, my old comrade, Maureen Ridge, knowing that I was visiting to catch up on the parent organizing progress of the ACORN-SEIU home child care partnership between Massachusetts ACORN and Local 888, had invited me to brief their staff on Katrina and other issues at a brown bag lunch. Susannah had responded enthusiastically about the prospects of support for the emerging political fight in the city. The progress on creating a parents organization at the core of the alliance was very encouraging. Early meetings had indicated bedrock support for increased vouchers since the waiting list had swollen to 14000 families in Massachusetts. The bureaucratic obstacles, list building, and legislative jockeying would be daunting, but the ACORN and 888 staff were talented and committed and making progress.

Michael Gallagher and I had a cup of coffee off the Commons at some bagel place. A veteran union organizer now working for SEIU 615, the Boston janitors’ union, Mike and I had worked on organizing campaigns together in New Orleans and elsewhere for 25 years even before the founding of Local 100 until most recently when he was with the AFL-CIO and was my right hand on the HOTROC campaign 5 years ago. For an hour we revisited neighborhoods in New Orleans from afar interspersed with updates on kids and friends, business and blogs. He knew the loss and could follow the opportunity at the same time — he was a part of my community and a quite port in the storm helping search the question of whether there was a future in New Orleans, and if so, what would it be.

In the evening I had been invited by Charles Knight to give the 2nd Progressive Strategy Seminar being organized by Commonwealth Institute based in Cambridge. A 2-hour format where Charles had encouraged me to mix in ACORN’s direction, critical issues for the movement (resources, methodology, etc), majority unionism and the Wal-Mart organizing program, and the impact of Katrina on all of this, was an invitation too good to pass up, particularly because it allowed me to reach out to my friends in Boston in sort of a gathering of the community and clan. The progressive community has deep and enviable resources in Boston. Working in its bosom can be deceptive and spoil one for the barrenness that greets so much of our work elsewhere in the country. A lifetime in this work also weaves strong threads across its web. Going around the room as Robert Zevin, Jeff Zinsmeyer, Kate Villers, Professor S. M. Miller, Charles Pillsbury all introduced themselves, one could hear names that represented the first rank of support for any fledgling endeavor that might want to step up the challenge of the agenda in Boston and beyond over the last several decades. Organizers were there from Neighbor to Neighbor, from Common Catalyst dealing with health issues, from public interest lobbying firms, and some academics. Rand Wilson, organizing director in Lynn for CWA, was there.

In a quick email I had turned out Lew Finfer, long time Boston area organizer, Lisa Clauson, former Boston ACORN head organizer now involved in a labor support project, the great Judy Meredith, probably the dean of social services lobbyists in the country, Leslie Mendoza-Kamstra, ACORN’s parent organizer, Lee Staples, Boston University Professor of Social Work and a organizer I had worked with in welfare rights, and of course Maureen Ridge and Mike Gallagher were there to make sure the story stayed straight. I joked that I was still working as an organizer, so I had pulled my share of the crowd.

It was fun to weave in the explosion of ACORN’s growth and the importance of the simple verities, like dues collection, counting heads, and day-to-day work, with the grand strategies around organizing the informal sector, the crises of the labor movement and the need to develop effective, replicable, and scalable “majority unionism” strategies with the challenge of Katrina in New Orleans and the obligation to bring race and class to the center stage in all of our communities. I showed some pictures on a power point of the impacts of Katrina on our office and operations in New Orleans. I wondered if I should show pictures of the neighborhoods and the devastation and whether or not that helped people grip these new realities or would the situation make them even more foreign, inaccessible, and overwhelming.

Nine o’clock marked the end of a long day in Boston. I felt like I was doing evangelical work among organizers in various ways at the fore fronts of many areas of the progressive forces. I had gotten to visit with close to 100 people in this whirlwind tour. We had moved the ball another couple of yards down the field on a number of fronts.

Maybe I was caught in the wake of my own storm here, but I kept feeling there was a real hunger for the fight. We were old dogs maybe, but there was still lots of bite. We knew how to make things happen. We might have lost a step in speed, but we could make it up over a short course because we knew a little bit more about how things work and how to make things happen — when we wanted to see it done. There was no quit yet. Maybe there was more caution and reservation, but it had not sunk into cynicism. The bright eyes of the 20-somethings of Green Corps were not so different from the sharp twinkle in the eyes of the grey heads of the Progressive Strategy Seminar. I draw real strength from that well. It speaks to heart, hope, and hunger. It speaks to there still be a future in this work, and not simply a past. Perhaps in the progressive moment is still coming? Walking through the damn, dark streets of Boston, pockets thrust in a jacket against the breeze, maybe it’s just how I rationalize “another day, another dollar,” but damned if I don’t want to believe!

I used to joke with my staff that in the same way that they organized local groups, my local group was the staff itself. Certainly the staff and leaders of our organizations are still the critical local group I organize, service, and maintain — and with more than 1000 folks on the payroll alone it has become a big one! — but somehow in recent years I’ve started to discover that I have added more local groups to my route. In the wake of Katrina with my blog readers having gone from just under 2000 people a month to almost 4000 a month, there is this virtual community group I now feel bound to supply and nurture. Even better in the aftermath of Katrina the constant level of feedback gave this virtual mass real names and faces with people reaching out on email, through comments, and daily life. I would joke about having to feed the beast — hey, I’m doing that now on a plane from Boston to Houston — but now it’s more like real organizing, because it seems to move people and it feels like it matters.

The third “local” group I’m servicing now still seems somewhat amorphous and it’s power more latent than manifest, but it feels like a “community” — part organizers, part activists, part political, part progressive, part family, part friends, part local, part international, part community, part labor — but all about making something happen to move the progressive pieces forward. A long day in Boston started to give this 3rd local group some faces, some voices, and some questions and comments to give form and direction to thinking about this larger community.

I think I see it better now, and it had better not be a mirage! 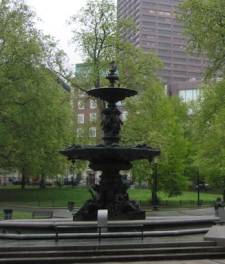