Baton Rouge     No matter what is happening, I have to catch the vibration of my main cell phone. The voice mail function seems permanently marred now, so missing a call means really missing the call as it disappears forever in a bursting shriek of sound sometimes when played back.

So, no matter what is going on, even when on another call or conference, I find myself pushing the phone to my free ear to try and hear who it might be. Especially now, because as we near the two-month mark since Katrina, I am still desperately seeking an insurance adjustor — not my adjustor, there is no such thing — any adjustor, and this is the only number they have.

My house has to have a new roof, and it needs it now! October has been relatively dry since Rita passed through, but in New Orleans, that will not last. If I had more money, I could get the roof and turn in the bill and hope for the best. Not being in that situation, we hunt for the adjustors.

Adjustors is a plural word when dealing with Allstate, which is supposedly a big company — one of the biggest — and has my house in the death grip of its sorry hands. I am on my 4th or 5th adjustor now. The President of Local 100, Mildred Edmond, hardly lives more than a mile or two from me and is facing twice the damage to her home. She is now on her 6th adjustor! Twice last week, she and her youngest daughter traveled to New Orleans for appointments with the adjustor. The first time was a postponement and then a “no show.” Two days later they journeyed back down to meet another adjustor for Allstate with a new name, but the same game, since he did not show either.

My adjustor was totally missing, so we sought to lay a basic trap. My intrepid and dogged master of all things to do with coping with New Orleans, the now famous Scott Hagy, was stationed within blocks of Port Street and was ready at the ring of a cell to come running to the rendezvous’ with Sister Edmond and her adjustor and spirit — by force if necessary — the scofflaw adjustor over to my house to finally sign off on the roof. Twice this semi-legal kidnapping plan was foiled by the sure, but simple, incompetence and duplicity of the adjustors just not turning up.

My dad’s adjustor from Liberty Mutual showed up right on the dot last week. Scott was amazed to see him even be willing to climb a ladder and look at the roof. They are the new aristocracy in New Orleans. Maybe we just landed with the wrong outfit?

One night last week an elderly lady from Atlanta had called me in the Baton Rouge office about 830PM to tell me that I had a new adjustor, which surprised me since I had never known my last adjustor. I told her my tale. She said he was a great guy and on contract to Allstate. On Monday another call came through from something called “Allied Adjusting” saying I had a new adjustor and they would call me in 5-days to tell me the name and from there we would start over. I went over the moon!

In the middle of a conference call a call came through from someone claiming to personally me the adjustor and saying he was good to go and would meet Super Scott between 8 and 10 in the morning on Wednesday. I made him take Scott’s Wyoming cell number. I demanded his. He stumbled on the number, claiming it was “new,” but I knew he was selling stuff then.

Nonetheless, we have to believe. We’re trying to hang on and the adjustors are the thin ice between whether we skate or sink with our houses around our ankles.

Maybe we will see this fella on Wednesday with his good hands. Maybe I will have to go through this another 3 or 4 times before we finally see a warm body that pays up on the claim. Somehow we never had the choice, but suddenly all the power slipped to their hands and we are being mightily abused by it as they setback the progress of the city’s rebuilding, house by house. 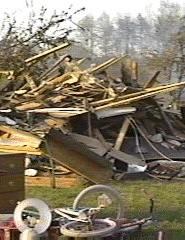