New Orleans          The garbage in front of our house has not been picked up in three (3) weeks.  This is true throughout the city.  There are lies in the paper every day from Waste Management, the city’s contractor, and city officials swearing that they are on it like “white on rice,” and it’ll happen this weekend.

One is the transfer of sanitation responsibility from the U.S. Corps of Engineers to the City of New Orleans.  Whoops, we dropped the ball!  And, boy does it smell.  To read the whine of the daily paper quoting the uptowners talking about rats the size of cats coming over the batture is a hoot.

The other is of course Mardi Gras.  We had 800 journalists in from out of town and the big whoops wanted to pretend everything was back to “normal” in New Orleans, so of course all the garbage trucks were within a drunk’s walking distance of the French Quarter and other areas were money spending tourists might be hanging.   I was quoted in the London Times with a colorful phrase about New Orleans being like a Hollywood movie set of a classic Western, where there is a main street and a facade of storefronts, and nothing but desert behind it.  And, I was right.

In order to showoff for visitors, we’re living in rubbish.   We are paying the price of living in a city of dysfunction.

I would also bet money that they don’t have enough laborers on the backend of the trucks.  And, I would win that bet.  Having dumped the union contractor that supplied that labor, I know Waste Management is scuffling.

There’s a mayor’s election going on.  Anywhere else, this would be the last straw.  Who knows now what is past the boundary line? 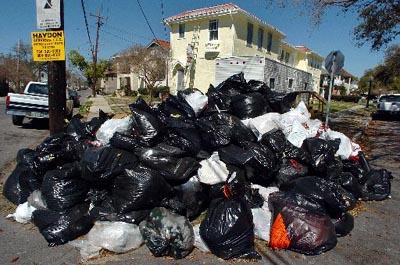 Trash piling up in Mid-City