New Orleans          It poured in Shreveport and there were rain delays around the Houston airport, so it was no surprise to find the front moving into New Orleans.  At 9PM there was a light drizzle and the streets were wet.  Traffic was flowing quickly, the rain was just enough to stop the construction on the interstate coming into the city.  We needed the rain, so this was all good.

When I turned off on the Franklin Street exit of the I-610, I drove into blackness.  Somehow the clock had flipped backwards by many months and there was no light anywhere other than the beams of cars signaling life and movement on the streets.  In aftermath of Katrina we had stop signs near the dead traffic signals, but now in a more optimistic world there was nothing but darkness, so cars crossing Franklin were tentatively trying to sort out who was stopping and who was starting.  Police emergency vehicles could be seen on St. Claude as I crossed over into the neighborhood.

Turning onto Dauphine to head downtown into Bywater, I put on the high beams to cut through the night.  Ironically, I had been thinking earlier in this trip that I still needed to buy a generator for just this reason, but a month or so had gone by without power outages, and one is easily lulled into a false normalcy.  I reviewed the post-Katrina New Orleans drill.  Grabbed by big flashlight and walked my bags through the rain fumbling for my keys.  One candle was on in the foyer.  Welcome home.

A half-hour later the phone rang!  Picking up in the pitch dark of the house, the caller asked for me and identified herself as an employee named Celeste, working at the main post office in New Orleans.  Confusedly, I asked her how I could help her.  It seemed she had been calling all afternoon, and that they had found a US Treasury tax refund check made out to me — and endorsed by me — on the floor of the post office without an envelope.  The check was dated in mid-February.  It had a story all its own, but the bottom line was that Celeste and her supervisor wanted me to know that they had found the check, found my name in the phone book — a lesson for open listings! — and wanted me to come get it before 1130 PM at the end of her shift.  I thanked her profusely, but explained that power was out throughout downtown New Orleans, and there was no way to come get the check then.  We worked out a time to pickup the check when her shift would begin on the next day.

Thankfully, the people still do. 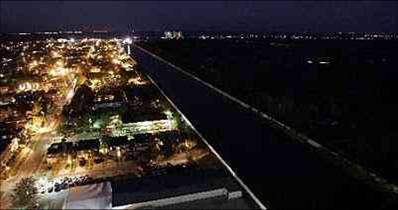 Three months after the storm, Jefferson Parish (on left) was awash in lights while Orleans Parish was still largely shrouded in darkness

Louisville        The ACORN National Board was meeting this weekend in Louisville, Kentucky.  To all of our surprise this turned out to be the weekend when they the city celebrated “Thunder over Louisville.”  Not sure exactly how to describe this outpouring other than a loud welcoming of spring in Kentucky accompanied by airplanes and then a loud and large fireworks display attended by 800,000 people down by the Ohio River.

Somehow it seemed more natural to hear the booms and explosions outside of the hotel windows at the same time I was reading the blackberry and web reports from the Election Day counts on Saturday night from New Orleans.  Boom-boom, 20% of the vote in and the top candidates were all tied — even the zookeeper, Foreman — when the largely white early precincts came in.  Boom-boom-boom as the east bank joined the numbers and the zookeeper slipped and the mayor rose to the lead.  It went on like this until I couldn’t imagine my absentee vote moving the election and could tell the trend line was as we were predicting for the last month — Nagin winning and Landrieu in the runoff.  This will become the face-off for the future for the May 20th election.

As we predicted the diaspora was disenfranchised when all was said and done, and as we could tell on the ground both in the city and around the country working with Katrina survivors, people were now “stateless” with a city in their heart but in the majority caught without the connections and convictions to vote and to fight.  Around 100,000 votes were cast.  Perhaps one-third of these votes were early voters and absentee votes.  Not inconsequential, but also not overwhelming since they could have turned any tide.

Some things now seem true, though we could argue about it.

Nagin can not win.  He’s toast.  On the dividing line of race, looking at the other candidates he can only expect to pick up about 2500 votes if he gets what might be out there for him, while Landrieu will inherit the zookeeper and minor league (Couhig) votes just because he is the only white guy still standing, and suddenly it seems to have become “white boy day,” as the movie line said years ago.

The Times-Picayune is also the big loser, though they will try to recoup in the finish.  They backed the white business footprint plan on Foreman and lost big.  Their assessors’ fake rebellion also lost overwhelmingly.   They will have trouble in the runoffs picking up the IQ protest candidates.

Either way the neighborhoods will win, because Nagin will promise big now, and Landrieu knows he can not govern as the “great white hope,” and hopefully doesn’t want to.  Certainly, he can’t if he still hopes to help his sister, Mary, have one chance in hell of re-election next time which depends on a big, black margin coming from New Orleans.

The state may also find some peace finally with a Mayor who as Lt. Governor at least wants to be on the same team as the Governor.

The people have spoken, even though their thunder is not what the Canizaro’s and the uptowners and the business elites wanted. 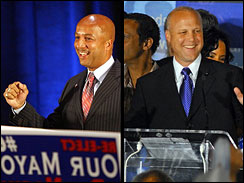