The Massachusetts plan is better by miles than what is moving forward in Arkansas.  As you remember the Arkansas plan is minimal coverage at minimal costs where 100% of the employees are covered largely by small business trying to protect some 80-90000 workers in the state.  Massachusetts is trying to cover an additional 515,000 people of the state’s more than 6 million over the next 3 years and somehow they are trying to do this without the state footing the bill.   The devil is in the details, and the details seem to involve both individual and corporate contributions, as well as penalties for individuals on their tax return reporting if they are not getting health coverage.

The rub is affordability.  An individual is hard pressured to health insurance in Massachusetts for less than $600 a month and $1000 a month for family coverage.  The state has acted to create a mandate that everyone must be covered, but is relying on market forces to develop policies that will be affordable enough that companies and individuals will acquire them.  Companies can only conceive of a reduced product if the “go Arkansas,” and strip the coverage of almost everything but the lower cost.  Consumers, especially younger, bulletproof workers without immediate health risk, might prefer to pay the tax penalties (only $150 the first year) rather than go for thousands for crummy coverage.

It is exciting that someone in this era of no national leadership and government is trying to put their arms around these terrible social issues, and health care is near the top of everyone’s list, but it’s hard to believe, despite the breakthroughs thus far, that we are quite there.  This would seem to be an opportunity for some states, and even Democrats, to look at the early entries in what I hope is a new health care sweepstakes, and come up with something that is both affordable and adequate.

At the end of the day I suspect there is no way to continue to hope that one can do this on the cheap.  That means that a fight is finally coming, but since it’s life and death, surely it’s worth it. 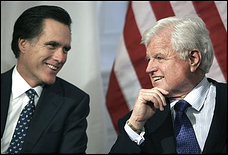