Dallas        Monday before dawn buses pulled out of Houston and other Texas cities filled with ACORN members who were damned if they were not going to be the first voters to take advantage of satellite polling places in Lake Charles, Baton Rouge, and Shreveport.  And, they were!

A Houston Chronicle reporter rode with a couple of the buses from Houston and a picture that one of their photographers took of the bleary eyed ACORN members assembling before dawn ran in the USA Today and other papers.  A picture of ACORN members on the bus pulling in with their red shirts on was front page above the fold on the lead article in the New Orleans Times-Picayune.   Adam Nossiter, the reporter from the New York Times, who has studiously avoided covering anything with ACORN for over 6 months finally gave up and met the buses in Lake Charles and filed a piece in the NYT with 2 pictures.

The AP wire hit everywhere big and small from the Guardian in the UK to every paper one can imagine in the states.  Kevin Whelan, ACORN’s Communication Director, reported that Google alerts informed him of 457 mentions on Tuesday.  It’s a perfect press storm!

Turns out that no one can bury the fact that no matter how unfair and inadequate the election was in getting out the vote, we seized the opportunity to prove that ACORN members would lead the way to vote in person and absentee.  Monday was the first day of satellite voting and in many places we were there to raise this up, and were the only folks there.

Not all of the 457 mentions were about voting though they led the way.  The immigration marches on Monday saw ACORN in the lead in San Diego, Lake Worth (FL), Houston, Little Rock, and places large and small across the country.  The Senate unfortunately on the lip of history couldn’t swallow their own compromise, so the streets will have to target the Congress for change.

And, since we’re talking about how all of these buses, marches, rallies, and actions make change, please note that the French unions and students won a huge victory forcing the souffle to fall on the rollback of labor protections for young workers in their country.  President Chirac turned tail and pulled the plug on the proposed act, while Prime Minister Villepin ate crow (as we would say here), and the coalition of unions and students continued to increase the pressure celebrating their victory.

Many lessons coming from the streets around the world this week! 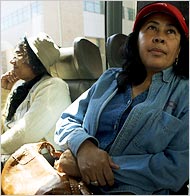 Katrina Armour, right, and Daisy H. Stricker were among those who rode with ACORN to Louisiana from Houston to cast their votes.