Ithaca, New York      New England was still a raw way from spring.  Daffodils were trying but the frost on cars and the iced over puddles told a different story when I was in Massachusetts and then again driving through the rain to Ithaca.

On Wednesday night I spoke to a graduate class at the University of Massachusetts School of Labor Studies.   Fascinating!  The notion that someone out there is teaching “organizing” as a mandatory part of the curriculum in a graduate program is just something that never occurs to me.  The professor handling the class was Ferd Wulkan, who had bounced around as a rep and organizer in Massachusetts including a stint at SEIU 509 when it represented workers at U-Mass itself.  The questions were kind and the audience rapt for much of the required 3 hours of the class, though one hated to have to tell them that the world they were trying to enter as researchers, academics, or even as organizers was so fragile and threatened with extinction.

I was lucky in many regards.  Stephanie Luce, the great living wage researcher, honored me by coming to say hello before the class, and then I also got to spend a minute at the end of the class with our old friend and champion, Bob Pollin, both of whom work at the Labor Studies Center.  It was nice to be able to celebrate the sudden victory in Michigan (followed within days of another surprise win in Arkansas!) on minimum wage increases.  We talked about strategies for these and other campaigns that somehow seem more and more related.  Langiappe, as they say in my country.  And, this does not even count the fact that “organzier5” (my daughter) was a member of the class and that I got to have a quick cup of joe with Professor Russell of Springfield College before pulling out on the highway to Cornell on Thursday morning.

At Cornell my quick emersion with students took another couple of tentative steps forward as well.  I spoke with our friends and a number of students at the Cornell Regional and Urban Planning Department at the invitation of Professor Ken Reardon and his team.  We have gotten to known many of these folks very well, and in the first talk probably half of the students in the class were able to raise their hands that they had spent time over their spring break gutting out houses with ACORN in New Orleans.  Felt like being home in the grey and frozen north!  We shared concerns and a Chinese dinner afterwards with the students and professors and tried to wrap out minds around their projects.  I was further briefed the next morning and in many ways at this great distance got a better idea from faraway about some of the work happening under my nose in New Orleans.  Good stuff!  Good people!   My oldest drove down from RIT to visit with me on Thursday night adding to the treat.

I finished playing a bit part in “Union Days 2006” sponsored annually by the famous Institute of Labor Relations at Cornell.  I was on a panel with Baldemar Velasquez, the founder and president of the Farm Labor Organizing Committee – FLOC, AFL-CIO, our old friend and companera, Nadia Marin-Molina from the Workplace Project in Hempstead, NY, and Byron Silva, an organizer for the Laborers’ who came out of the great asbestos workers drive in NYC run by my friend and colleague, Dave Kiefer from our days at HOTROC and now SEIU, and who still works for our friend Dave Johnson at LIUNA.   The panel was about Innovations in Organizing Migrant and Immigrant Labor — reports from the struggles of New Orleans workers, Midwestern farm workers, day laborers on Long Island, and East Coast construction sites.  Another good crowd with kind students!

With a panel like this it was impossible not to hear questions about the immigration debate dominating the news — should we make a deal or hold out for something better?  What should we do?  With the failure of the Senate deal now the conversation had some additional meaning.

Baldemar perhaps in two very different ways captured the meaning of these times the best.

First, he quoted a line from a country and western song in answer to one question that was lost on most of the crowd, but I thought was invaluable.  It was not a common cultural reference for the hyper-cool of the laboring Ivy League.  The line was that “…when it comes to lovin’, you don’t count the cost.”  His point was that there was no upper limit to the price and demands of solidarity — you did what had to be done by any means necessary.  But, phrasing it from the country caught the crowd off guard.

They understood better later when he exhorted them from the perspective of age and experience, that “this was their civil rights moment” and they should do everything they could to be a part of it.  He spoke of people wishing they had marched with King or fasted with Chavez or done what had to be done and had lived with the times demanded such work and such will.  Then he reminded the crowd that this was their “civil rights moment” — a time when millions of immigrants were marching and fighting for their rights and citizenship in this country, and it was an opportunity to be part of something spectacular, no matter how unexpected.

There was no immediate response from the crowd, so it’s hard to tell whether or not they got it or not.

I have always talked about the responsibilities of building something like ACORN and the fact that it provided capacity and support that made such an organization an especially critical asset were there times of real movement and opportunities for more fundamental and cataclysmic change.  This just might be one, so it is good to see ACORN being part of so many of these rallies and demonstrations in city after city.

Every civil rights moment is one that has to be preserved, protected, and promoted! 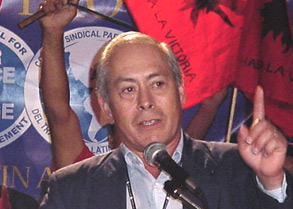 Baldemar Velasquez, the founder and president of the Farm Labor Organizing Committee – FLOC