Los Angeles       Questionable tactics have met a predictable media backlash trying to argue that the movement has lost its groove and the mass base has gone elsewhere.  A called march in DC recently delivered only about 5000 people, if reports are to be believed.  Another set of “Labor Day” rallies in several cities were also disappointing.

Organizing is not just a matter of throwing it up against the wall and hoping someone comes, so perhaps this was a valuable reminder.  ACORN shipped members from several cities down on busses to the DC event, and the members were frankly also discouraged at the low numbers.  Stuff happens and perhaps after the earlier run this is a good wake-up call that this still will mean hard work and that there are no shortcuts.

Hopefully some of the wannabe “organizers” will also learn this lesson and reach out more deeply to the base before printing flyers for new marches and mayhem.  But, maybe not… and if not, we could lose our high ground and the promise of victory.

Could be we should hunker down on the political and registration side while we rebuild the momentum?  That strategy could actually work and more and more people are talking about it making sense, so why not?

A crowd of about 2,500 people came out to attend an immigration rights rally put on by Phoenix ACORN in conjunction with the Somos American Coalition on Sept. 4, Labor Day.

Phoenix ACORN chair Carmen Arias was one of 48 speakers who addressed the crowd. Three tents were set up, sites where volunteers registered people to vote and distributed postcards urging members of Arizona’s Congressional delegation to support a path for citizenship for illegal immigrants.
Overall, 75 people registered to vote, 80 postcards to legislators urging them to work for fair immigration reform were collected as well 50 vote by mail/early ballot requests.

The messages of the rally were simple: Congress should work hard to pass fair immigration reform; immigrants are workers, and they are here to support their families.

WASHINGTON, Sept. 10 — For a moment, it sounded like one of the spirited crowds from this past spring. There, at the foot of the Capitol, flag-waving immigrants chanted and cheered and warned lawmakers in Congress to take notice.

“Legalization now!” they shouted. “Who are we? America!”

But this time, only a few thousand people protested, not the hundreds of thousands that organizers had expected at the rally here on Thursday. And similar scenes played out across the country last week as immigrant demonstrations drew much smaller crowds than anticipated in Los Angeles, Phoenix and Batavia, Ill.

Buoyed by the huge immigrant protests in April and May, some organizers had predicted that a million people would take to the streets around Labor Day. And they vowed to produce a million people, through voter registration and citizenship drives, to press for legislation that would grant legal status to the nation’s illegal immigrants and help shape the outcome of the November midterm elections.

Some organizers now acknowledge that both goals were overly optimistic. And political analysts, policy makers and immigrants alike are questioning the staying power of the fledgling immigrant rights movement. Can the disparate group of churches, unions and immigrant rights organizations that tapped the frustration of immigrant communities transform itself into a political force that can reliably mobilize the masses to march and vote?

The movement, some organizers say, may have blunted some of the harsher legislation that had been under consideration in Congress. But it faces an uphill effort, and the shifting political landscape will play a major role in its long-term vitality.

Armando Navarro, a professor who helped organize the Los Angeles demonstrations in the spring, said he believed the protest movement had sputtered once it was clear that the harshest legislation would not pass.

Many immigrant marchers were outraged by House legislation, approved in December, that would have made it a federal crime to live in the United States illegally. The provision would have turned millions of illegal immigrants into felons, ineligible to win any legal status. Living in this country without a document like a visa or a green card is now a violation of civil immigration law, not criminal law.

That bill has stalled along with a competing Senate bill, which would have granted legal status to most of the nation’s illegal immigrants. The Congressional stalemate has left immigrants less motivated to march, Mr. Navarro said, and less optimistic about the prospects for legislative change while immigrant leaders try to find a new strategy.

“Division has set in over strategy,” said Mr. Navarro, who teaches ethnic studies at the University of California, Riverside. “There was no consensus on what we should do next. We lost an opportunity to create a transition to a new rhythm.”

Roberto Suro, director of the Pew Hispanic Center, a Washington research group that tracks political trends, said it remained uncertain whether the groups could easily regain their momentum.

“There was an effort to resurrect that collective outpouring of the spring, and it clearly didn’t succeed,” Mr. Suro said of last week’s marches. “The question is, What do they do next? If it’s going to be a movement, it’s definitely struggling, not just for legs, but probably for air right now.”

Organizers counter that their movement is alive and well, but grappling with the inevitable growing pains that afflict any emerging political organization.
Juan Carlos Ruiz, the general coordinator of the National Capital Immigration Coalition, which organized last week’s rally in Washington, said immigrant groups were still struggling to raise money, develop strategy and overcome internal divisions and disappointment among their constituents at the slow pace of change.

Mr. Ruiz said the campaign to register voters and naturalize immigrants was initially hobbled by poor financing and the lack of technical expertise to identify potential voters and new citizens. But he said that his group and others were steadily building that expertise and hoped to have an impact in November and beyond, with a particular focus on the presidential election in 2008.

“We had the number of volunteers ready to go, but without financial support, without the technical support, it is very difficult,” Mr. Ruiz said.

“But we are building capacity, educating our communities, building relationships with other groups,” he said, pointing to emerging alliances with African-American churches, unions, antiwar groups and others. “We are growing, and we are learning. And my sense is that we are cultivating something very powerful. In the presidential election we will see a big shift.”

Cecilia Munoz, a vice president of the National Council of La Raza, an immigrant advocacy group, said she believed many illegal immigrants were reluctant to march because increasing numbers of those immigrants had been arrested in recent months.

This year, the Department of Homeland Security sharply increased the number of workplace raids, making 245 criminal arrests of employers, up from 25 in 2002. Some 2,700 immigrant workers were caught up in those operations, and most were deported, officials said.

Ms. Munoz also said that immigrants who had hoped the spring marches would move Congress were feeling increasingly disheartened. “In the spring when people were marching, there was a real sense that this could be within our grasp,” she said, referring to legislation that would legalize illegal immigrants. “It’s clear to people now that we have a long way to go before this is going to happen.”

But she, too, emphasized that the immigrant rights movement was shifting into a more critical phase, beyond marching and rallies.

“We’re not picking up on diminished urgency or energy in our communities,” Ms. Munoz said. “But a lot of the energy invested in marches in the spring has been invested in developing infrastructure for the long term. And we’re discovering it’s hard to do that and organize marches.”

A survey conducted by the Pew Hispanic Center found that many Hispanics were energized by the demonstrations. About 75 percent of the 2,000 Hispanics randomly surveyed from June 5 to July 3 said they thought the debate would prompt more Latinos to vote in November, and 63 percent said they thought the marches signaled the beginning of a new and lasting social movement.

But the political outlook has changed enormously since then. President Bush, who championed legislation that would put illegal immigrants on a path to citizenship, has found his stature weakened. And conservatives in Congress, who once seemed on the defensive, have rallied.

Representative Jeff Flake, an Arizona Republican who favors legalization of illegal immigrants, said the protests were ultimately counterproductive because they galvanized conservatives who criticize legalization as amnesty for lawbreakers.

“Looking back, the massive protests with immigrants waving Mexican flags was detrimental to those of us who wanted comprehensive reform,” Mr. Flake said. “It just polarized us.”

At the rally here in Washington, some marchers said they were disappointed by the low turnout. Aurora Flores, a hotel worker from El Salvador, said people were beginning to doubt that the marches would change anything.

“With the last rally having been so big — so many people — and nothing seemed to happen, a lot of people were discouraged,” Ms. Flores said.

But Siu Hin Lee, an immigration advocate from Los Angeles who attended the rally here, said he was hopeful about the power of the movement, even though the crowds had been smaller than expected.

“It’s not one march, one mobilization, and you get change,” said Mr. Lee, coordinator of the National Immigration Solidarity Network. “It’s a long-term struggle. And we’re keeping up the momentum.” 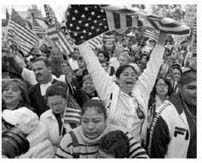 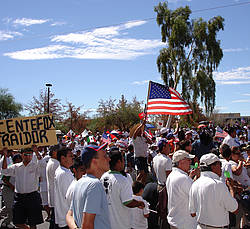