Istanbul       In Instanbul we spent many hours with first the General Secretary of Tekgida-Is, and then the General Organizing Secretary, and finally with the actual organizers and even some stewards of this union of industrial food, beverage, and tobacco workers.  Scratching like chickens in the yard, we were finally getting somewhere closer to a real understanding.

In a detailed review of their organizing model which the organizers gladly shared, the biggest difference was the organizers ability to access the employee list through the social security office both because it was a legal right and because they could get the hook-ups with personnel inside to make it happen for them the classic five-finger way.  Their reliance on the strength of the organizing committee and the importance of the organizing committee quickly and quietly passing the cards to get to a majority sounded so much like the US NLRB model that I could have closed my eyes and recited it.  Even the notion of filing with more cards in a larger unit and the time and trouble to figure out the unit size and other workplaces that might be thrown into the unit seemed vividly reminiscent.  The fact that the employers almost always challenged the unit and the decisions were technically due in 60 or 30 days depending on the court sounded like the chamber of delays and horrors we also knew well.

I came away with respect for their organizers though saddened that they seemed to lack the targeting skills that they really needed to go after private sector companies and that they were clearly totally out of their element in imagining how to effectively conduct corporate campaigns with global companies.  In whispered conversations the regional organizer and one of their research staff explained to me and some of our delegation with the Organizers’ Forum (www.organizersforum.org) the problems they were encountering with Damon, the French based multi-national, resisting their drive on 900 workers in an Istanbul facility.  This should not have been so hard for them.

Later on the same afternoon we toured one of their plants and talked so some of the plan mangers, supervisors, engineers (who were members of the Chamber!), and their shop stewards.  It was industrial plant anywhere with familiar machines, hats and booties, prohibitions on smoking and cameras, and cogeneration facilities to power the operation.  We broke up the monotony of the plant life, and it was fascinating to walk side by side with the stewards and hear about trying to bargain for shift selections and ending up with same ol’ same ol.’ Just like home!

We also learned that free riders do not have to be represented by the stewards under the agreement though they often are in order to try and recruit them.  The collective agreement only benefits the members and those non-members who pay “solidarity dues,” which would be on the order of the US agency fee.

All of this was very precious in its own way.  Good people, good organizers, and a good contract.  We were seeing a union though with jurisdictional problems that was spending only 10% of its dues on organizing and struggling to meet the challenges of a modern world.

De ja vu all over again.

We did not need to leave home to see this, but it scared the bejesus out of me regardless! 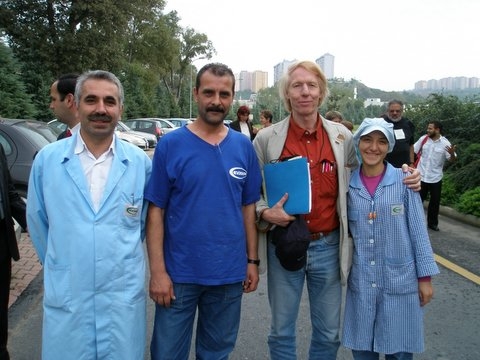 Wade Rathke along with Tekgida-Is shop stewards at the ezod soap plant.