Tampa        Meeting the staff of the Wal-Mart Organizing Project in Tampa, we shifted through the reports and press calls from reporters expressing surprise that more than 100 Wal-Mart workers in Hialeah Gardens outside Miami had hit the streets to protest hour’s cutbacks.  Rick Smith, the organizing director, handled a call from the Bureau of National Affairs Daily Labor Report, but mainly the staff just smiled and sighed.  We had been telling some of the same reporters about this issue of store wide hours reductions for over a year.  Finally, some fed up workers jumping in the street made it national news.

Wal-Mart is always quick to respond.  Interestingly, Wal-Mart is usually also quick to concede and did so in this case transferring the blame to the local store manager and pretending that there was a breach in policy and the cuts should not be storewide.  The facts are that scheduling on a store-by-store basis is driven more by computer programs in Bentonville, Arkansas, than by a simple store manager in Tampa, Orlando, or Hialeah.  Part of what drove the Wal-Mart Workers Association to go public almost a year ago had been the same situation when hours were cut on a storewide basis across central Florida.  In those cases as well it was a series of cuts including some reductions that effectively trimmed the full-time staff by reducing hours for some workers to 6 hours per week.

The drive to reduce workers to part-time status is Wal-Mart wide, so reporters and the public should not be surprised.  Steve Greenhouse in the New York Times also pointed out the complaint of the protests that they had to call 800 numbers in Bentonville to report absences and sick days, and the call then reroutes them to the local manager.  He does not particularly connect the dots.  This is because the employee records, schedules, and hours are all centralized through the computer system in Arkansas and the store is simply the backup.  This is decidedly not an area for local store manager discretion.  This is a bright clear line.  On one hand WWA applauds the fact that it eliminates “picks and chooses” to some degree (not completely because if you do know how to contact the local supervisor the “absent” day may not hit the computer or the records obviously) through centralization, but it continues to make a lie out of the company’s claim that local store managers have much if anything to say about employee relations.

Interestingly the WARN researchers and organizers also pointed out that the company is slowing its expansion efforts.  The number of proposed new stores is decreasing.  Some are being put on hold even before they can get to the stage where we can beat them.  At ground zero in the Wal-Mart organizing efforts from discussions with hundreds of our members who work for the company as well as so many communities that deal with Wal-Mart, we think the company is in trouble, and knows it. 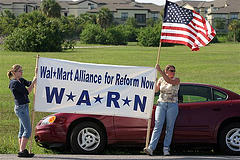