New Orleans         October has not been the best month for our friends at Wal-Mart’s. It turns out to be hard to run the world after all. It also seems that maybe Mr. Sam’s advice to keep out of politics and hunker down in Bentonville may not have been hopelessly old school, but may have been based on a recognition that Wal-Mart really did not know what it was doing outside of the hills. Look at just some of the mess our guys have stepped into in recent weeks:

* In the middle of October a jury in
Pennsylvania ordered the Wal-Mart to pay
$78.5 million for breaking the labor laws
by forcing employees to work through rest
breaks and off the clock. Whoops!
* The company sent a mailing to all of its
employees urging them to vote and
represent the company’s interest and
defense. This ham-handed political play
provoked articles everywhere mentioning
the obvious that perhaps this was just a
bit coercive to try to tie a paycheck to the
ballot box.
* The company announced its second firing
from the faux Wal-Mart support effort.
Andy Young had been the pitchman for
this outfit and self-destructed. The PR
man Wal-Mart had on the campaign also
had to resign a couple of days ago,
because of course who do you think was
behind the leeringly, racist TV attack ad
on Harold Ford’s bid to be Senator in
Tennessee? The Wal-Mart contractor of
course!
* Wal-Mart’s effort to win a charter for an
industrial bank in Utah seems finally (as
we have often predicted here!) to be
getting obituary notices even in the
Wal-Mart fanzine, also known as the Wall
Street Journal, which in a detailed report
surveyed exhaustively how many
missteps of arrogance in general and
tone-deafness in particular, the company
had made. The obvious problem of
refusing to voluntarily put itself under
community re-investment (CRA)
standards, as HR Block and others had
willingly done, along with ticking off the
community bank associations made their
effort pointless.

For all of the talk about the “new” Wal-Mart, this still remains a company that seems so trapped in its insulated corporate culture that it is unwilling to recognize that the public does something other than walk down their aisles with shopping carts. Sometimes in fact the citizens vote, think, and take names, and one of the ones they are taking down more frequently is Wal-Mart’s. And, that’s not so good for the company in October. 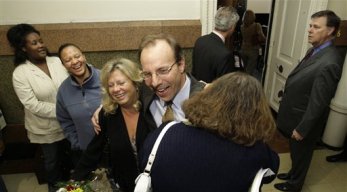 Dolores Hummel and other plaintiffs celebrate their award.