Lagos This is a classic ACORN story. One of our Brooklyn local group leaders, Dr. Toks Pearce, was originally from Nigeria and now a US citizen with no plans to return to this country. Then a boyhood friend who had run for election as Governor of the State of Lagos and narrowly lost 4 years ago, announced that he was running again, and drafted his friend, Toks, back to lend a hand. The two had great confidence in his victory and began talking to Bertha Lewis, NY ACORN Executive Director and ACORN Mid-Atlantic Regional Director, about building an ACORN Nigeria to give a voice and effective role for lower income families demanding to participate in community and political affairs in the country. Never able to say “no” to our members and leaders, Bertha and I began the dialogue about what, if anything might make sense.

This is not a straight forward path, but a classic ACORN story, as I indicated. Toks’ friend was assassinated. Rather than that ending the conversation, the dialogue instead accelerated. The widow decided to become the standard bearer and seemed favored to win as well in the impending elections this spring. We agreed to visit over the Thanksgiving holidays. I had a last minute visa problem, and Bertha Lewis carried the ACORN banner in her usual wonderful way for a round of days of meetings that had been designed to lay the groundwork of an ACORN Nigeria. But, a promise is a promise, and I’m here now trying to assess the prospects in this complicated and somewhat chaotic country and in the city of Lagos, which is widely reported to be the single fastest growing urban population in the world.

Toks is still on the ground having made a similar commitment. Politics though is serious business here. The widow won the party primary with a strong majority. There as a “but” though. The party altered the rules requiring a 2/3rds majority for her to be their candidate. The long and short of this story means that she was replaced as the flag bearer for the Governor’s chair. In Bertha’s words, “they are not going to let this family have any power in Nigeria.”

The election is this spring from the President’s post on down and all around Lagos there are signs of the campaign and the last minute jockeying for position. Talk everywhere holds that some of the main candidates are still unstable and on the verge of being replaced by their parties. This is not media politics, but old school party machine politics about who is able to pull the base.

The President Olusegun Obasanjo is in the middle of trying to “clean” his slate around huge charges of corruption leading to constant disputes at the very top of his team accompanied by court filings and resignations. This is the first civilian to civilian political transition for the country. Whatever the merits of Obasanjo and his own record, clearly he is trying to get ahead of the train here.

Contradictions abound of course. The richness of the oil production in this country had not trickled down to the populations. The news that imprints still focuses on the regular kidnapping of oil workers by both gangs and insurgents. Today’s headlines included a firefight and kidnapping of more than a half-dozen Chinese workers from an oil service company they were operating for the Nigerians.

Crime is also a constant concern. The airport was perhaps the most unusual in my experience, which is increasingly diverse. The passport control was extremely quick, but when the door opened to baggage claim, a passenger found oneself in the middle of two long conveyor belts and piles of bulk and personal goods everywhere on the floor with passengers, police, military, porters, janitors and others literally everywhere. Quite the scene! Made me remember earlier in my trip being able to visit a “branch” of the national museum at the airport and sit quietly with others on reclining chairs for some peaceful shuteye.

Once lucky enough to find a bag, another form was checked by the military and the next door let you to nothing other than outside. An airline worker rechecked your claim tag against your bag, and then you were on your own. The airport it turned out in order to protect the passengers had sealed off everything with more military. To find a cab into the city one marched several hundred yards, were rechecked by military and then “released” outside of the airport to fend for a cab into the city.

Signs littered Lagos warning people about crime, saying that since the airport had instituted new security measures to deal with crime, much of it was shifting to hotels and public places. So beware!

The most interesting story in the local paper, The Guardian, detailed the charges that a half-dozen stolen “voter registration machines” had been found in one of the major party offices. Such a coincidence would allow the party to privately enlist its people onto the voting rolls for April.

First lesson in this work is never to assume that one really understands anything! 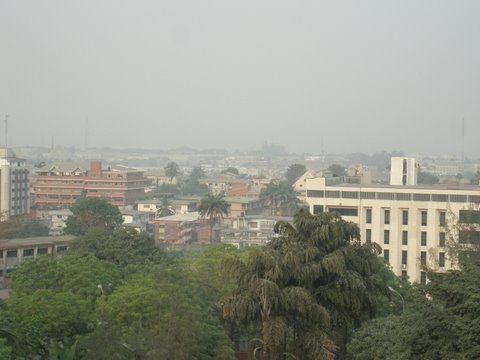 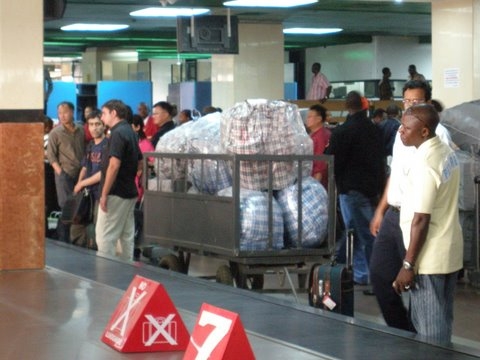 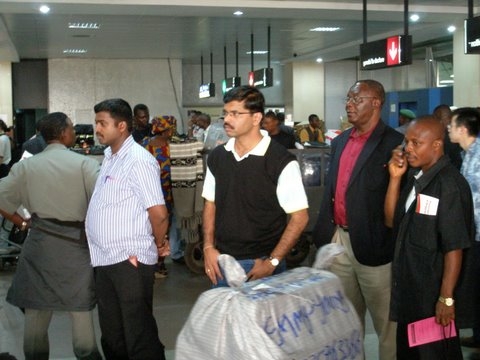 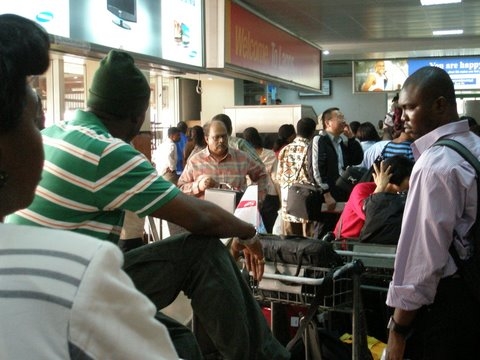