New Orleans Hope springs more eternally than, well, spring it seems. At the best one could say that the 40th anniversary repeat of the March on the Pentagon from the same date in 1967 as this weekend was beaten by the weather. Reports estimated that there might have been between 10,000 and 20,000 in Washington, but that within an hour the miserably cold weather had driven the crowd down to 1,000 or so hardy souls. Some others may have been scattered in protests in other cities. Certainly, a movie star was pictured in the papers carrying a sign in Los Angeles.

The reports contrasted this to the earlier March on the Pentagon on the exact date four decades previously. The papers said that that event had 50,000. One current paper, probably written by a recent 20 something-year-old school journalism graduate said the notable thing about the first march was the attempt to levitate the Pentagon with the chants.

Most reports at the time conceded the numbers at more than 100,000. It was also bitingly cold and gray that day, though not snowing, so it was hard to remember the event as being held in welcoming weather. Norman Mailer knew he had a good story in Armies of the Night, and he certainly won the prizes for the book, but the levitating notion was a fringe Yippie thing that was sidebar to any of the main events and programs, and hardly the thing that made the event memorable.

I was there as a simple soldier in the movement against the war that wanted to take a stand at the Capitol, so my memories are as idiosyncratic as anyone else’s might be. I certainly don’t want to seem like a tedious old timer claiming that “ours” was better than yours, but….

Where is the anti-war movement? Was this event, which certainly could have been big since it coincided with spring break and hundreds of colleges, put together by an unrepresentative and marginal group? Are we living in a time when people are so “webbed up” that they have lost the ability (remember the same recent problem in the immigrant rights movement?) to turn out real people and demonstrate real anger with our boots on the ground?

Is our inability to organize at scale around the war strengthening the hand of the President to continue to pursue this crazy war? 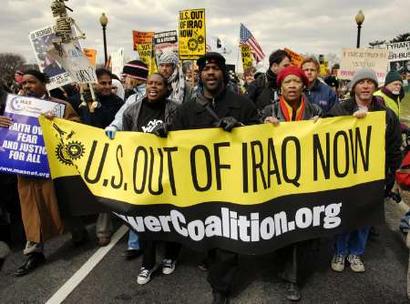 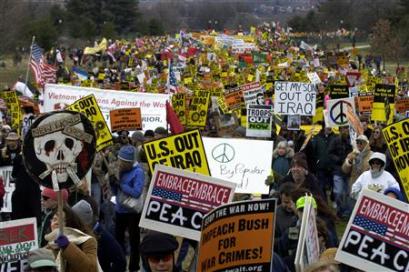