Chicago Wal-Mart conceded the inevitable and pulled its application for an industrial bank in Utah. ACORN, WARN, and half of the Western world had opposed the application, which was clearly not moving forward. We had predicted the withdrawal repeatedly right here in these notes.

But, don’t get the big head so quickly.

Wal-Mart easily got permission to open a bank and offer banking services in Mexico where they are also the largest private sector employer and have more than 700 stores. Wal-Mart has also been in the process of re-negotiating leases with the smaller banks that rent space in 1000 of their USA stores to include in the list the fact that Wal-Mart might rent to them, but also might compete with them by offering an array of financial services from money orders to home mortgages.

It is never over until it’s over, and in the case of Wal-Mart and banking, they still seem to be saying “give me the money” despite their ham handed attempts to try and end around play in Utah with a specialty bank and avoidance of community reinvestment standards. Keep an eye on your wallet, they still want as much of it as they can grab! 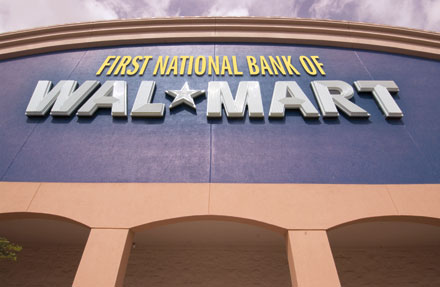 Although this photo isn’t real, many bankers worry it could be.