Tagaytay City In the first day of meetings of LOCOA, the Leaders, Organizers and Community Organizations of Asia, we opened with introductions of organizers from Indonesia, Burma/Myanmar, Thailand, and of course our friends from Korea, and many of the organizations from the Philippines, that I first met here two years ago. The challenges faced by these organizers are immense. The list of coups, democracy movements, and military interventions in each report are staggering. The tasks faced in Myanmar are almost unimaginable.

Regardless of the first day’s reports, the one from our brothers from Thailand working with two NGO’s to support an organization of the urban poor, called the 4 Regions Slum Network, was the most impressive for what it was accomplishing in that country. All of their work is also against the backdrop of a coup within the last year pushing out Prime Minister Thaksin, who is arguably the richest Thai and increasingly had been seen as among the most corrupt. The 4 Regions group had been part of anti-corruption rallies against Thaksin and his government before the coup. This is a confounding situation since the military coup seems to be popular because of the disgust with the last regime, even though the restoration of democratic norms is the current struggle.

The 4 Regions Slum Network is a national organization in Thailand with almost 10 years under its belt. The national network is composed of ten local and regional groupings beneath the national structure, all of whom provide their own support and resources when engaging in collective actions, projects, and demonstrations — and from the slide show they presented, there are a lot of them. The leadership rises from the membership and presents the public face and governance of the organization. Priorities are established through a national meeting annually. All of this sounded a lot like ACORN, so it was a pleasure to hear about their success. The relationship between the 4 Regions Slum Network and the two NGO’s — the Human Settlement Foundation and COPA — which provide their staff, was hard for me to understand in terms of accountability, financing, and similar issues. Ake, the lead organizer from COPA, was clearly talented and committed.

Also impressive was the fact that they were winning, especially when fighting for land rights and long-term, 30 year leases for their slum dweller members on railway lands and along canals banks in Bangkok. They had managed to get the support of the Railway Workers Union, which spoke to some skill as well on the railway fight. The Bangkok Municipal Administration had been the target on the canals fight.

The cooptation efforts of the Thaksin government added a new dimension to the discussion from yesterday. They established a Community Organizations Development Institute (CODI), whose main purpose and frequent success it seems had been to integrate leaders of the urban poor into this governmental agency and away from their fights for slum dwellers.

Proving that nothing is ever the way it seems, except in this case, the 4 Regions Slum Network definitely seemed to be the real deal. 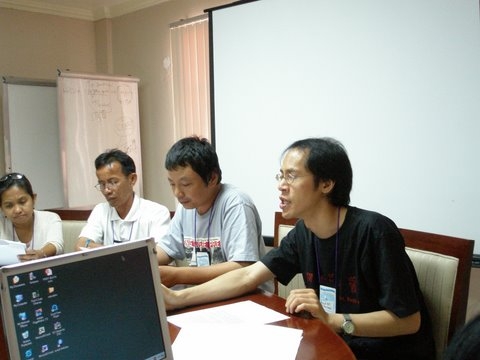 Thai delegation with Ake of Human Settlement Foundation in the middle
Fides Bogasao, director of LOCOA, under the LOCOA banner 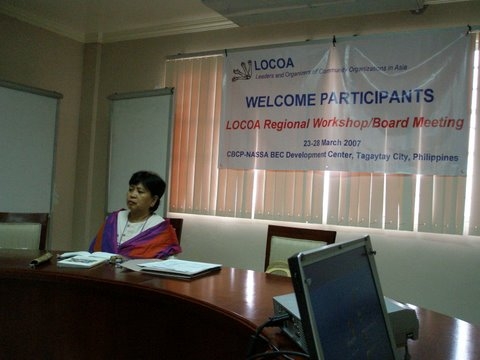